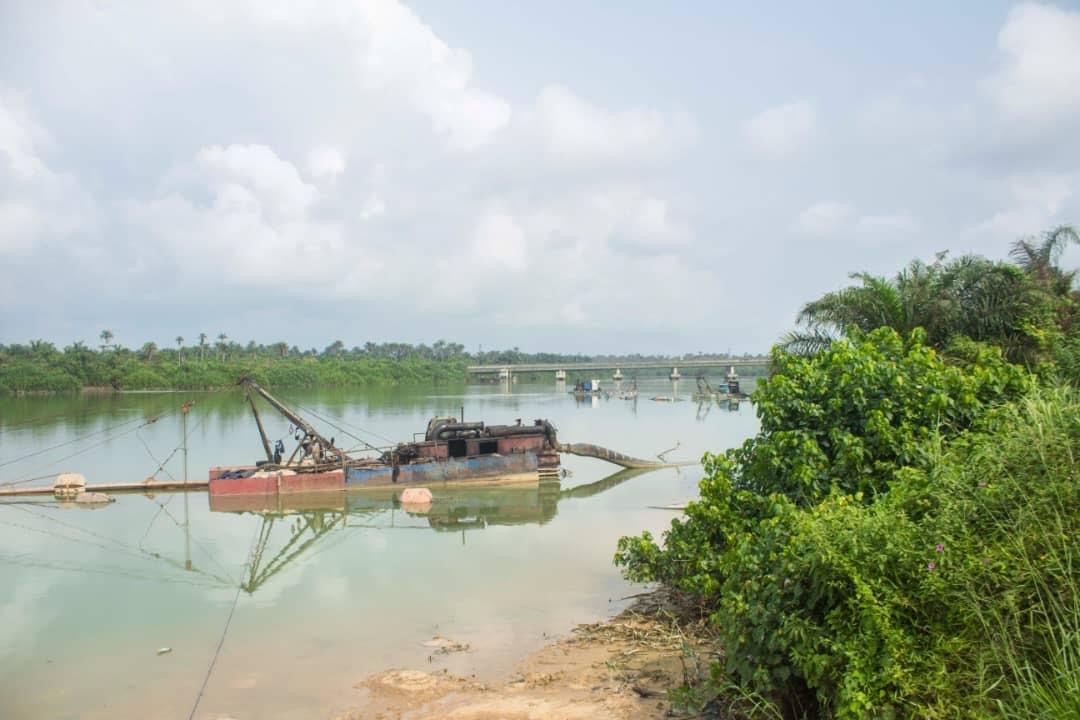 The Akwa Ibom State Government has called on all illegal sand dredging activities across the State to stop forthwith in order to preserve and secure a healthy environment for the people of Akwa Ibom State.

The Commissioner for Environment, Sir Charles Udoh who made this call during an on the spot assessement of illegal sand dredging sites in Eket and Nsit Ubium Local Government Areas today expressed great displeasure on the dredging activities at Qua Iboe river and Usung Inyang in Eket and Ikot Ntung bridge head at Nsit Ubium Local Government Areas.

While addressing the dredgers, He said “As a State Government, we are poised through the Ministry of Environment to ensure that activities of Illegal sand dredging are curtailed and regulated so that the ecology will not be destroyed. We are not saying that people should not dredge but there are laws, criteria and standards that must be met which is why we are here to enforce that”.

At the Palace of the Oku Ibom Ibibio, the Chairman, Akwa Ibom State Council of Chiefs and Paramount Ruler of Nsit Ubium, Dr. Solomon Etuk who expressed concerns over the illegal dredging activities in the area maintained that what is worth doing is worth doing well adding that all must live and operate with unity and strive to maintain the law and order of the land.

Dr Etuk stressed the need for synergy between the Ministry of Environment and the Traditional Council of Chief’s to key into Government policies said “I will never be part of anything that will disrupt the peace and harmony that exist in my community”.

He pleaded with the Commissioner, Sir Udoh to do everything within his powers to ensure that the ecology of the State is salvaged.

In his response, the Commissioner of Environment, Sir Udoh assured the commitment of the State Government to ensure that the environment secures its pride of place in the affected areas.

Speaking Earlier at Eket, a former Minister and Senator in the State, Senator Helen Esuene while commending the State Government for the initiative to stop illegal dredging stated that sinking of boreholes should be regulated by Government through issuance of permit to persons emphasising that some residents of the State are in the habit of digging boreholes close to septic tanks which makes the water contaminated.

Senator Esuene stated that “the environment is all we have, it is what God gave us and we should enjoy it, draw from it and preserve it so that we have what to hand over to the next generation.

The Permanent Secretary of the Ministry, Mr Nsudo Nsudo thanked the Paramount Ruler of Nsit Ubium for the words of wisdom he has dropped to give solutions to the illegal dredging activities adding that the ministry will address every erring dredger who defaults from the State Government’s policies on dredging.

Present with the Commissioner of Environment at Eket was the Vice Chairman of Eket, Rt. Hon. Comfort Emmanuel, the Secretary of Eket Local Government, Hon. Chief Uso Hanson, the DPO of Eket, Mr Sunday Diar.
Also present in Nsit Ubium and at the Palace of the Paramount Ruler of Nsit Ubium was the Clan Head of Nsit Ubium, His Royal Highness Etebom Ukpong Udoewah (JP), Director, State Security Service in Nsit Ubium Mr. Henry Eke and DPO of Nsit Ubium, Mr Cletus Jonathan.

Also in the delegation from the ministry was the Director of Flood and Erosion, Mr. Okon Effiong, the Information Unit and other staff of the Ministry.