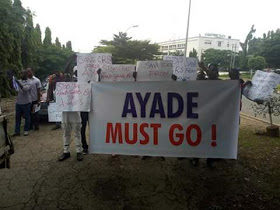 The penultimate week ended with a melodrama on social media following the return of Sen. Prof. Ben Ayade from his  annual vacation and the widespread of photos and videos of protesters in Abuja demanding that ‘AYADE MUST GO’. 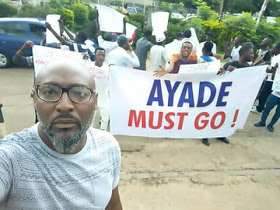 Let me save your data from Google search, Senator Professor Benedict Ayade is the serving Governor of Cross River State duly elected in 2015 on the platform of the People’s Democratic Party (PDP). The Chief Press Secretary to the Governor, Mr Christian Ita was quick to respond to the viral video, rising in defense of his boss in the well written article titled ‘ Cross River 2019: Laughable Antics of the Desperadoes and Failures’. The article to me, is indeed laughable.

First of , Mr Christian should try to ensure the articles from his desk are well read before sent out, a few typographical errors here and there, which is least expected from someone at his level, occupying such critical position in the pen pushing profession. No one is perfect though, we know.

According to the article ‘Yesterday, some failed politicians of Cross River State origin hiding under a faceless group, “Forever Cross River”, made mockery of activism and agitation when they engaged five jobless youths for N1,000  per person, to wave anti-Ben Ayade placards at the national secretariat of Peoples Democratic Party, PDP.’

The protest by Cross Riverians in Abuja is not the reason for this write up, it is rather unfortunate that it inspired a supposed regular act by the media aides of the Governor. Of all the 3,000 plus aides of Governor Ben Ayade, he should be the most popular Governor in Nigeria (In positive light, with emphasis) If all his aides make public his achievements on their respective social media platforms.

As a new media practitioner, I am very aware that it takes as much as 1,000 and above tweets and posts to trend on social media, with all the aides, how many times has Governor Ayade trended ? How are his aides projecting his works outside Cross River?

This gives rise to mind boggling questions; Why must Governor Ben Ayade’s aides be on the defensive ? Why must they pen articles about achievements of their boss only when situations like the Abuja protest arise? Or in response to an attack by critics or opposition.

In the words of the Commissioner for Culture and Tourism, Eric Anderson, it is called ‘Preaching to the Choir’. All the Commissioners and media aides to the Cross River State Governor does is publicising their activities amongst themselves in WhatsApp Groups.

I charge them to take a clue from other states, I site an example with nearby Akwa Ibom, it is a case of over flogging, media critics accuse the Governor’s aides of ‘hyping’ and ‘padding’ activities and efforts of the Governor, Mr Udom Emmanuel, while members of the opposition party critically follow up the activities in search of loopholes. The opposition puts politicians in the ruling party on check, it puts the government on their toes, holding them accountable and leaving the citizens on the receiving end, to enjoy the dividends of democracy.

One video pops up from the blues and they are quick to respond with a long epistle all readers already know is to be in defense of the attack on their boss and benefactor.

Am I the only one who is not current enough to know that Governor Ayade recently won the Business Day Best Performing Governor in Agriculture award? I just discovered that in the article by Mr. Ita, leaving me in shock that Governor Emmanuel did not win the award even with all the hype of the Agricultural Revolution in Akwa Ibom state.

A situation which can only be understood by those who are aware of the fact that ‘the ultra modern Ogoja Rice mill, the cotton farm in Woda, Yala,the cocoa processing plant in Ikom, the Banana plantation in Odukpani, the feed mill and yellow maize farm in Obubra and the ultra modern poultry in Calabar are all verifiable agricultural investments undertaken by Ayade just within three years’.

I put it to the leader of the protesters in Abuja, Bassey Ekpo, can the less than 20 protesters be more correct than the thousands who turned up to welcome the Governor?

I put it to Governor Ben Ayade’s aides, why should ‘5 protesters in Abuja’ according to the CPS, be the reason for this lengthy article?

Instead of constantly reeling out the projects of the Governor on a regular basis, highlighting the impact on the people and economy.

I think if this had been done, or is being done on a regular basis, the protesters in Abuja would be on their way back home to Cross River to key into the projects in any sector which concerns them.

Personally, After spending the last 6 months in the state, traversing the nooks and crannies from the South to Central and up North, I think the achievements of Governor Ben Ayade are underpublicized,

even though I stand to be corrected. I am of the opinion that the Governor’s aides must go, not home, but to the project sites, to propagate the efforts of their boss. Instead of waiting to write long articles only the educated can read and only the people in their circle have access to.

Even in the politics of inclusiveness Prof Ayade is running, it is impossible to engage all and sundry, as such, it is inevitable to experience citizens exercising their fundamental human rights of demanding to be in the know about how their tax is being used.

I drop my pen for now, until I hear the reason for the protest by Mr Ekpo, the leader of the protest in Abuja. I am sure the Governor will like to know why the bearded man wants him out of office.