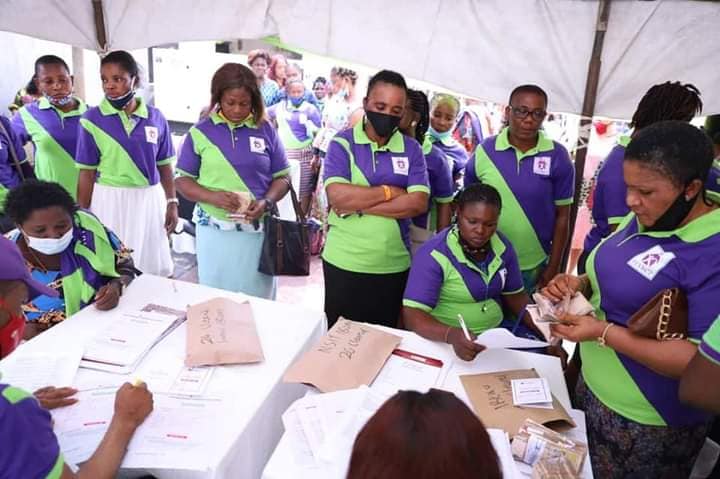 The Pet Project of Wife of Akwa Ibom State Governor, Family Empowerment and Youth Reorientation Path-initiative FEYReP, has provided 4-month interest-free loans to women with small businesses across the state.

The loan facility which is a follow-up to the recently unveiled FEYReP Multipurpose Cooperative Society by the governor’s wife, Her Excellency, Dr. Mrs. Martha Udom Emmanuel, had over 1000 grassroots women from 14 local government areas as first batch beneficiaries.

At the cash presentation ceremony held at the Cooperate office of FEYReP, Ewet Housing Estate, Uyo, the founder of FEYReP charged the beneficiaries to invest the funds received wisely so as to refund within the given period.According to the governor’s wife, the loan which is a revolving one is aimed at improving the living conditions of women especially at the grassroots.

Dr. Emmanuel who stated that it has always been her desire to leave the women better than she met, added that before she quits the stage as governor’s wife in 2023, a large number of women would have been empowered through the loan scheme.

In her words, “Since we came in 2015, I have always said that it is my desire to empower our women to be economically self-reliant. This loan scheme is part of the measures we have taken to inject life into rural communities. I urge you all to be judicious with this loan and ensure you pay back on time so others can also benefit”.

While noting that the amount given depends on the nature of the business, the First Lady also took out time to lecture the business owners on various principles of business and as well urged them to be good Ambassadors of FEYReP Cooperative in their various communities.

Earlier in her tone setting, the Coordinator of FEYReP, Mrs. Ime Inyang said it took a little while for the loans to be given out because administrative procedures needed to be followed for proper documentation. She thanked the governor’s wife for her initiative and for being a bastion of hope to many in despair, saying the interest-free loans will go a long way in improving small scale businesses.

Also speaking, the Special Assistant to the Governor on Trade and Market Matters, Akparawa Idoreyin Raphael, described the loan scheme as the first of its kind in the state, positing that in an era where women are buying money to do business, the governor’s wife has so decided to change the narrative by giving out free-interest loans to women.

He encouraged the women not to disappoint the governor’s wife but to repose the confidence by refunding within the stipulated time.

Some of the beneficiaries, who spoke, thanked Dr. Emmanuel for the initiative and expressed optimism that the loan will go a long way in boosting their businesses. They also promised to repay the loan so others can benefit.