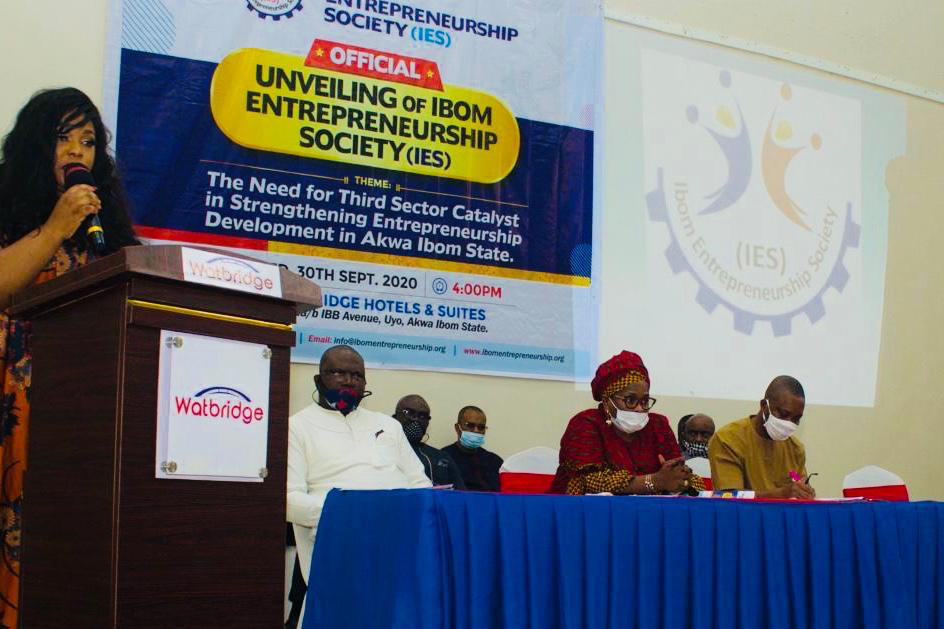 In the meeting he was duly represented by the (SSA) on Skills development, Mrs. Alice Ekpenyong, He commended the contribution and initiative saying it was geared towards the development and forward movement of the State. Gov. Emmanuel promised to acknowledge all development that comes as a result of the efforts and role of entrepreneurs in the state.

In his opening speech, he added that the government will partner with groups and NGOs that are willing to grow Small and Medium Enterprises (SMEs) in the state

He also disclosed that the government was working assiduously to combat the effect of the COVID-19 pandemic on entrepreneurs making effort to alleviate the effect of this pandemic on SMEs, adding that it welcomes suggestions from stakeholders in the sector.

The Chairman on the occasion, Mrs. Meflyn Anwana described entrepreneurship as a critical sector of the economy that must be developed, supported, and encouraged to drive the economic variables that will inturn cause the development of whole sectors. She said, “I believe this is one of the things IES is targeted at achieving and I know by God’s grace we will achieve that in the end.

Mrs. Anwana who is also the Special Assistant (SA) to the Governor on Entrepreneurial development said lending support to a network of entrepreneurs will go a long way to encouraging them to continue doing their good work, also applauding entrepreneurs for their contributions to the development of the society.

She added that entrepreneurs remain one of the key variables that serve as a catalyst for the growth of any economy and the governor is focused on growing and diversifying the economy of the State with entrepreneurs as critical partners, this is why there is a serious effort across different government agencies in promoting and driving entrepreneurship in the state especially during this post-COVID-19 era” She reiterated the government’s resolve to collaborate with IES to support more entrepreneurs in the state in terms of facilitating training and providing Business support and linkages among others.

While congratulating the promoters of IES on the unveiling of the brand, the SA urged them to be focused on advancing the goals and aspirations of entrepreneurs and businesses in the state and ensure unity of purpose and direction. She lauded governor Emmanuel for the Dakkada philosophy which she said has been entrenched in the hearts and minds of all Akwa Ibomites.

The President and Chairman, Executive Board of IES, Mr. Emmanuel Daniels, said Ibom Entrepreneurship Society is coming on board to stimulate sustainable entrepreneurship in Akwa Ibom with membership open to all Akwa Ibomites both at home and in the diaspora who are existing or prospective entrepreneurs.
Mr. Daniels said “in strengthening the entrepreneurship landscape, IES seeks to dialogue and partner with government at all levels, engage the private sector with a view to catalyzing entrepreneurship, modify cultural norms and remove cultural barriers that are antagonistic to entrepreneurship, advocate the removal of regulatory bureaucracy, encourage the celebration of successes, establish strategic capacity building on contemporary issues as well as attract grant and ensure bankable Ibom business plan”

The launch of Dakkada philosophy by the present administration has changed the mindset of the people of the State to embrace entrepreneurship adding that IES which is a third sector platform was established to complement various government initiatives.

He appreciated the entrepreneurs for gracing the occasion, saying that by attending the event, they have not only honored them but have sent a very strong message to Akwaibomites that with the oneness of purpose, we will find the best way to rise.
The President commended the effort of the executive board for making IES move from the drawing board stage that started about two years ago to a full-fledged third sector organization which is duly registered with the Corporate Affairs Commission.

While giving an overview of IES, he described it as a house with one roof, one voice, and one person having seven pillars of Innovation, Support, Finance, Culture, Education, Markets, and Policies.
He identified Re-enforcement, Ability, Knowledge, Desire, and Awareness as the foundation upon which IES is built upon, saying they were fully prepared to ensure the success of the initiative.

Finally, The keynote speaker, Prof Edet Akpakpan, stressed the need to develop the capacity of entrepreneurs to boost the economy of the State.

Mr. Akpakpan who is a professor of economics and former DVC) Administration, University of Uyo said entrepreneurs are critical to the growth of any society, adding that any society without a pool of entrepreneurs will be backward.
“We need entrepreneurs that will create enterprises that will strengthen the economy and we need a strong economy to be able to have a better life

He lauded the government for the quest to develop entrepreneurship in the state through the creation of an enabling environment and encouraged people to take advantage of the infrastructure on the ground to start their businesses.

The Executive Secretary/CEO of IES, Mr. Ufford Ebong while urging the entrepreneurs to embrace the initiative, assured them of their resolve to guide them to succeed in their businesses.The event ended with the official unveiling and cutting of the IES cake.