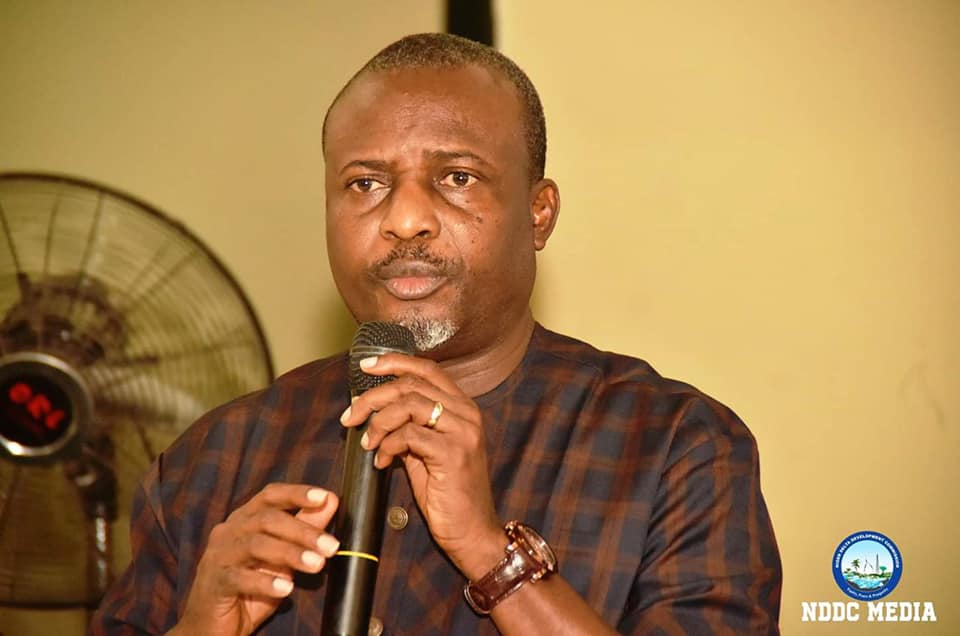 We woke up to see publications by some APC jobless merchants of blackmail, Iniobong John and Clement Ikpatt, allegedly sponsored by Chief Godswill Akpabio, to attack and insult every person who dared asked any question on the controversial death of Chief Ibanga Etang, Acting Executive Director of Finance and Administration of NDDC. Their suggestive and clearly premeditated tantrums, has compelled us to ponder on what they could possibly be trying to cover up? Why would people in the midst of such tragic circumstance, prefer to insult the bereaved family with praise singing and sycophancy on the Minister of Niger Delta when they should have joined to ask questions on this unfortunate scenario.

It is indeed a very difficult and heartbreaking moment for the family of Chief Ibanga Etang. As Akwa Ibom people, the demise of an illustrious brother, a former aide to Gov. Udom Emmanuel on Project Monitoring, renowned youth leader who once held sway as the chairman of local government and former President General of Afigh Iwaad Eket. One can only imagine what the immediate family is going through at the moment, as we all pray God to give them the fortitude to bear the loss.

While it is sad that Akwa Ibom people have lost their own representative in the Interim Management Committee of the NDDC, it is very appalling, shocking, callous, astorgous, stony- hearted, cruel, rude and insensitive for some persons to fly on the wings of the sad incident and make insidious statements, whip up sentiments, give it a political colouration, incite division, leaving the bereaved family despaired, heartbroken and emotionally shattered.

This is the time that answers should be given to critical questions in order to unravel the controversies surrounding the sudden dead of Chief Etang. Akwa Ibom people, the youths and elders, women and men are still asking, why now? Why is it when he was to appear before the Senate to clarify on the alleged fraud in the Commission? Why did the Commission quickly upload on their website that the deceased died of COVID-19 when the autopsy was yet to be released? Is Etang used as a scapegoat to buy time as insinuated in some quarters? Why did the NDDC quickly ask staffers to go on a two week break and disinfection of the NDDC underway while the result of the autopsy was awaited? On a very serious note, these are questions on the lips of Akwa Ibom people and indeed Nigerians. No one is authorized to allege an individual as COVID-19 positive, except the NCDC, so why then did the NDDC quickly paint such picture?

Akwa Ibom is reputed to have the best treatment services for COVID 19, and as Governor Emmanuel bemoaned during the commissioning of the International Isolation Center, it is unfathomable that her son would have died of COVID-19 when people from other states come here for management and treatment. To Governor Emmanuel, it was necessary for everyone to ask question about the fate of an Akwa Ibom indigene, especially when it appears the circumstances of his demise are clouded in controversies? The Governor neither mentioned any name nor accused anyone. He rather advocated a clear process to bring out the truth. As the saying goes, only the guilty is afraid, it leaves one wondering if the noise expressed by the charlatans, do not convey a feeling of guilt.

Under his watch, Akwa Ibom is currently the most peaceful in the country, a far departure of the period before 2015, when the state became a killing field of a sort, and a theatre of political persecution, assassination and kidnapping. Governor Emmanuel, a caring Governor set the tone by asking the same questions that Nigerians are now asking over the demise of his one-time aide and an indigene of the state, some misguided elements who may have sold their conscience to the devil, rose to flimsy opinions that the Governor is not in the same political party as the deceased and should not bother. If a Governor who swore to the constitution to place value on the lives of his people, cannot ask questions, then who is eligible to ask?

Could it be that Clement Ikpatt, Iniobong John and their cohorts have suffocated their consciences, and perhaps replaced their hearts with the hearts of animals? How would you explain that men who should be sober at such a loss are dancing naked in public, launching insults and aspersions on the governor, in the name of discharging their services as house boys? It is sad that some persons in this century have sold their senses of reasoning for financial gains. It’s devilish and sacrilegious to use the sad incident to attempt to divide the state on political lines, when we should all come together to unravel the darkness that surrounded the dead of Chief Etang.

The elders of Akwa Ibom State, the youths, men and women won’t sit and fold their hands and watch the issue swept under the carpet. Already, the social media are awash with expressions of anger, pain, sadness and indignation over the political game being played with a priceless life by the NDDC and the authorities. Whether Etang belonged to APC or any other party, the main thing is that he is an Akwa Ibom son, and so the quest for justice in the quest to unravel his death, should not be politicized. There is obviously no need exerting energies to exonerate Mr A or B, when no one has yet been indicted or accused of the malefic incident.

Well, an end to that silence has come. The people want to know what killed Chief Etang and why he had to die for others, when the Son the God had already paid the supreme price.

They want to know why he had to die now. They are interested in knowing why NDDC was obviously so restless and eager to mislead the people with their false updates?