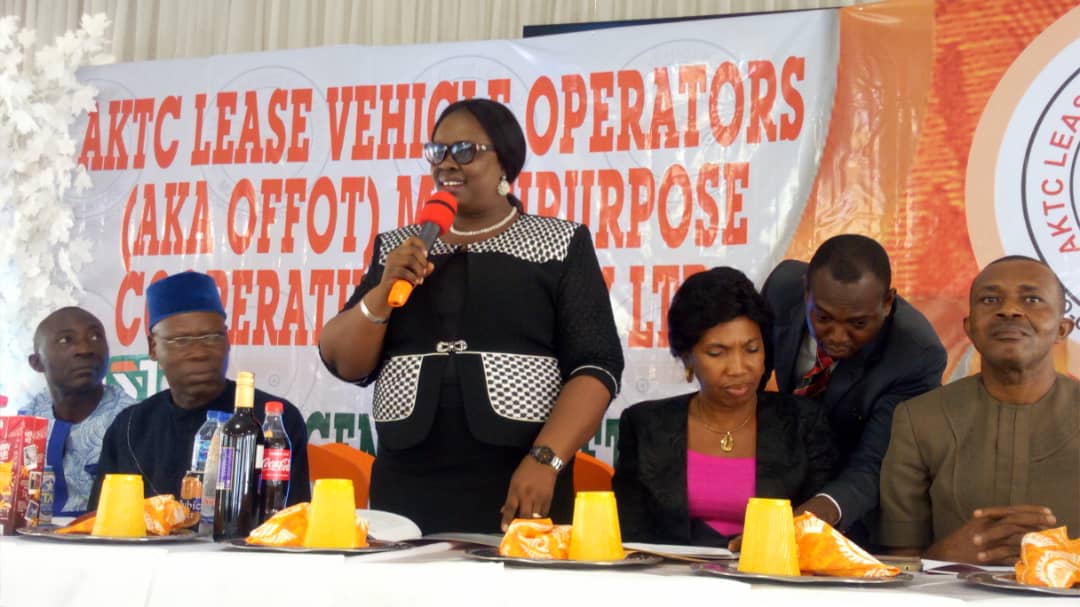 After many years of legal battle and internal crisis over the management committee of Akwa Ibom Transport Company (AKTC) Lease Vehicle Operators Multipurpose Cooperative Society (MPCS) Ltd, Aka Offot, the group has finally buried their differences and joined hands to elect the new management committee to run the affairs of the organization.

The election of the new management committee and other leaders of the group was supervised by the Permanent Secretary Bureau of Rural Development and Cooperatives Akwa Ibom State, Dr (Mrs) Helen Ukpabio, transport stakeholders, and security agents during the first annual general meeting of the group which took place at Bezaleel Hall, Uyo last Tuesday.

The meeting had in attendance the President of the society, Obong Michael Ibanga who was reelected the president of the organization, MD/CEO of AKTC, Mr Nsikan Johnny, represented by the Traditional Manager, and the Vice President of Akwa Ibom Cooperative Federation (AKCOFED), Pastor Asuquo Jonah.

In her remarks on the occasion, the Permanent Secretary, Bureau of Rural Development, Akwa Ibom State, Dr Mrs Helen Ukpabio, commended members of the society for their maturity in operations.

She described the group as one of the best cooperative societies in the state who are very focused and result oriented. And used the opportunity to congratulate the new management committee headed by Chief Ibanga as the president and Akparawa Sylvester Inyong as general secretary on their well deserved reelection, and charge them to keep the tempo higher.

In her keynote address, Director of Cooperative Services, Akwa Ibom State, Mrs Imaobong Ibanga, expressed delight for making the day a reality and thanked members for their efforts to ensure that the annual General meeting of the society held.

She said Cooperative business is generally accepted everywhere in the world as a channel of distribution of input for the reduction of poverty and development of medium and small scale enterprises.

Taking Akwa Ibom for instance, Mrs Ibanga noted that the model has been in terms of choice of areas of investment, management and development of dependable capital base.

“That is why is why we have cooperatives in every facet of life including AKTC and Insurance.”

Mrs Ibanga maintained that the success story of any Cooperative Society is not only the responsibility of the management committee who must operate in transparency, unity and tolerating each other, but also the responsibility of all members because they must play their own roles in payment of their shares and interest on loans.

She assured of government’s commitment to regulate, suppervise and train staff to cope with the nature of jobs and services needed.

The meeting witnessed the dissolution, election and inauguration of Management Committee, Council of Inspections and Head of blowers, as conducted by the Vice President of Akwa Ibom Cooperative Federation (AKCOFED), Pastor Asuquo Jonah.

Council of Inspection has Mr Michael Udoh as Chairman, Elder Joseph Mbaba as Secretary and Emmanuel Akpan as member, while those at the Head of Blowers are Aniekan Nathaniel and Dominic Udoh as Chairman and Assistant respectively.

MD/CEO of AKTC, Mr Nsikan Johnny, who was represented by the Transport Manager of the company said he was delighted to be a part of the gathering… “It shows decency in our doings. Whatever you start, if there is no sacrifice and commitment, you’ll destroy whatever you started. I implore everyone to believe in the management and yourself.”