For the 17th time, the APC in Akwa Ibom has been rebuffed by the President Muhammadu Buhari. In yet another rally held in his honour, the President ignored them, and even failed to sent a representative. After waiting endlessly at the airport for any delegation from the President, it was safer to agree that Ita Enang should stand in as the representative.
The blunder in the protocol, where the representative of the President was not recognised by speakers after speakers, was a clear confirmation that the makeshift Ita Enang arrangement did not hold any water.
For a President who has repeatedly lied about the poor Calabar -Itu-Ikot Ekpene road, since 2015, there was nothing in Akwa Ibom to show for his reign, So why would he come and embarrass himself?
Again, those strange bedfellows who where struggling for Mic against each other on the podium, do not look like they can manage the affairs of 6m people for just ONE term?

And that one term balderdash, forget that thing jare, A promise of doing one term is like telling a lady “lemme just rub my something on the surface, I won’t penetrate, I swear” . 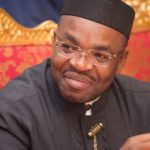