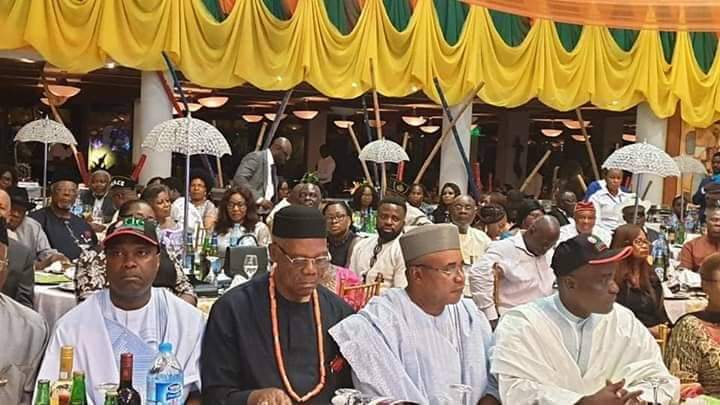 The return of impunity by the All Progressives Congress in Akwa Ibom state reared its ugly head yet again on Saturday night at a state banquet in honour of former Governor Victor Attah by the Akwa Ibom State Government at the Ibom Hotel and Golf Resort.

However the attempt to breach the peace at the event by the APC Governorship candidate, Mr Nsima Ekere, was quelled by the security agents who forcefully bundled out the NDDC Managing Director’s personal thugs led by one Uyo Nathaniel.

“The event would have ran into a hitch with a major security scare, when Mr Ekere arriving the venue late, deliberately caused a scene by not showing regards to the Governor, the celebrator and other very important guests present, but choose to put on his governorship political campaign fez cap and walk right to the table with his personal guards, in flagrant disregard to all the VIPs present,” an eye witness told our reporter.

The event which was greeted with a bipartisan acceptability as a pan Akwa Ibom celebration in view of Obong Attah’s role in the development of the state and his struggle for the emancipation of the Niger Delta region.

At this point, an already furious Ekere and his security aide, Mr Uyo Nathaniel started causing a scene, but officers of the DSS who were to provide security at the venue entertained no such nonsense.

“Mr Uyo Nathaniel was rounded up by the DSS and thrown out of the venue alongside other thugs that came with the former deputy governor.

The Managing Director of the NDDC had to retreat and squeeze himself into a seat close to where his compatriots Don Etiebet, and Ita Enang sat.that was assigned to him and barely sat for up to 30 mins before sneaking out of the venue”, said a source.

He quietly sneaked out of the venue shortly after, without taking part in event of the long night of celebration.

Some APC chieftains who spoke on the security breach by Ekere condemned the incidence.

” I am his friend but Attah’s 80th birthday was a pan Akwa Ibom event where partisanship ought not to have been the issue. I warned him to arrive on time with other APC chieftains but he preferred to listen to Uyo Nathaniel than some of us and see how it ended”, said an ally of Mr Ekere.

The celebrant Obong Victor Attah while giving his remarks warned the oppositions in the State not to play politics as if they are going to war.

He gave example that during his days, himself and late Obong Akpan Isemin used to halt their campaign trains on the way and hug each other.

Obong Attah who was emotional following the renaming of the state airport after him, thanked Mr Udom Emmanuel repeatedly for honouring him, and assured that honour will always come the way of the incumbent governor.

The former Governor, who was using the Ibom Five Star Hotel and Golf Resort for the first time since he completed it 13 years ago, said he was fulfilled and would resist the temptation of shedding tears at the manner his efforts have finally been appreciated in the state.

It would be recalled that his first attempt to hire the Hotel for his 70th birthday was rebuffed by the Godswill Akpabio led administration, and he was forced to use the open field of his church for the event.