In a move that has shocked even his closest allies within the APC, the former Governor is insisting the university be named after his late uncle and former Premier of the the Eastern region, Chief Ibanga Udo Akpabio.

The former Senate Minority Leader is of the opinion that his late uncle being the first educationist of Akwa Ibom extraction, not Obong Attah deserves to be honoured.

The move which came as a surprise to some chieftains of the APC, his new party, seems to have the endorsement of Obong Nsima Ekere, who Akpabio has placed the duty of naming the institution after the late premier as one of his precondition for support come 2019.

Many close associates of Akpabio are expressing shock over the former Senate Minority Leader’s move. According to a source close to Akpabio who pleaded annonimity, “When we first heard this issue of hiring senior lawyers to go to court to stop the Governor from naming the Akwa Ibom State University after Obong Attah, we thought it was a joke.

“I don’t know who his advisers are but Akpabio and Nsima should tread carefully if not they risk inciting the whole state against themselves”.

“Obong Attah has suffered and sacrificed enough for this state and the Niger Delta more than anyone and must be allowed to receive whatever honour the state deems fit for him as he marks his 80th birthday”, he stated. 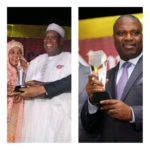