“The Super Eagles of Nigeria must approach their World Cup opener against Croatia with the mentality of a cup final final….focused, determined, conscious of the fact that victory today will see them one leg in the second round” says Governor Udom Emmanuel of Akwa Ibom State, member of the Federal Government Delegation to the World Cup Russia 2018.

The Governor, who hosted the Super Eagles to a historic qualification at the Godswill Akpabio international Stadium in Uyo says Croatia may be the Eagles greatest Challenge yet…” …..this will be a massive confrontation. We should forget Iceland, forget Argentina, remain focused, get the three points at stake and we will be well motivated to approach the remaining two matches with a lot of confidence and self belief” the Sports Governor of the year 2017 said.

In a released signed by Paul Bassey, the Governor’s Senior Special Assistant on Sports, the sports loving chief executive who is the Apostle of the Dakkada Philosophy ( Rising to greatness) said in the Eagles he sees hope, determination, the can do spirit that is the hall mark of the Nigerian youth, one that should be brought to the fore today.

” whenever the Eagles played in Uyo we struggled to turn back teeming supporters after the stadium had been filled to the brim. TodayWe in Akwa Ibom, the adopted home of the Eagles will  join millions of Nigerians at home and in the diaspora to be on our knees praying God to take over from where the Eagles will stop. We are very optimistic that the Eagles we know will rise to the fate of greatness and make us proud by the time the referees final whistle will sound today” he said

Previous UDOM IS A PRUDENT AND TRANSPARENT LEADER
Next Obong Nsima Ekere; Be a Man for Once. 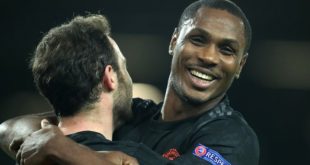