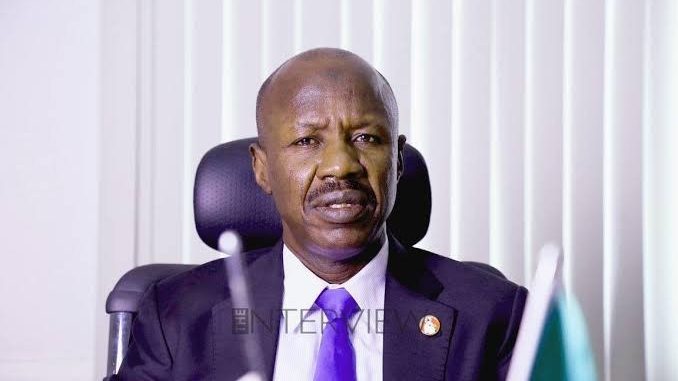 SOME OF THE ALLEGATIONS

•Alleged discrepancies in the reconciliation records of the EFCC and the Federal Ministry of Finance on recovered funds
•Declaration of N539b as recovered funds instead of N504b earlier claimed
•Insubordination to the Office of the AGF
•Not providing enough evidences for the extradition of Diezani Alison-Madueke
•Alleged late action on the investigation of P&ID leading to legal dispute
•Not respecting court order to unfreeze a N7b judgment in favour of a former executive director of a bank
•Alleged delay in acting on two vessels seized by Navy
•Alleged favouring of some investigators called Magu Boys
•Reporting some judges to their presiding officers without deferring to the AGF
•Alleged sale of seized assets to cronies, associates and friends
•Alleged issuance of investigative activities to some media prejudicial to some cases

FOR hours on Monday, Acting Chairman of the Economic and Financial Crimes Commission (EFCC) Ibrahim Magu testified before a panel looking into allegations levelled against him by Attorney-General of the Federation and Minister of Justice Abubakar Malami (SAN).

The panel is headed by Justice Isa Ayo Salami, a retired president of the Court of Appeal.

Magu was detained last night after being quizzed by the panel.

He was whisked away from the Presidential Villa, where he was interrogated to the Force Criminal Investigation Department (FCID) at about 10.15pm shortly after the investigative panel ended its sitting.

His escort mobile policemen and security detail were stood down before he was taken into custody.

It was learnt that shortly after emerging from the sitting, Magu was led into a waiting  white Hilux van marked 371D.

Magu insisted on sitting in the open space at the back of the Hilux.

The police team persuaded him to sit in the first cabin.

The ding-doing over his relocation to the FCID lasted about 25 minutes.

Magu was later allowed to go to the FCID in his official car.

A source said: “In the light of the ongoing investigation, it became expedient to detain Magu at the FCID. We do not want him to return to the office while he is being questioned, because he is likely to have another session with the Justice Salami panel.”

It was also learnt last night that Magu might be suspended from office.

“By not allowing him to go back to his office was an indication that he might be suspended.

“It is obvious that the Presidency has concluded plans to look for a new candidate for the office,” the source said.

At the FCID around 10.50pm, Magu rejected an offer to take him into an office to stay the night.

He told the officers in charge to treat him like a suspect by putting him in a cell.

Sitting on a chair, he said: “I won’t go and sleep in any office, I prefer to be in a cell. Kindly put me in a cell. That is what Allah wants for me. I can’t question God.”

There was drama to Magu’s invitation earlier in the day. He was intercepted on the road along Fomella Street while moving out of the Wuse II office Annex of the EFCC in Abuja.

Invitation was then extended to him by a Chief Superintendent of Police (CSP) from the Force Criminal Investigation Department (FCID).

The CSP’s vehicle had a backup comprising a three-man security team, who closely watched the encounter.

Magu was on his way to the Force Headquarters. He pleaded with the officer to allow him to honour the scheduled appointment.

But he was told the invitation by the panel was superior to his appointment.

The EFCC chairman, who went to the Villa with his full escort and security detail, was not arrested or molested.

While the session lasted, Magu had unfettered access to his mobile phones.

The panel was also polite as he was allowed to pray and given a free lunch.

A source, who spoke in confidence with our correspondent, said: “The CSP was polite. He even allowed Magu to speak with an officer in the FCID to ensure that the invitation was genuine.

“Instead of going to the Force Headquarters, Magu called his lawyer, Mr. Rotimi Oyedepo, and headed for the Banquet Hall of the Presidential Villa.”

The travails of the EFCC chairman started on Sunday night when a source, suspected to be a former EFCC official, posted on Facebook that “next week, Monday-Friday are black days to (sic) Mr. EFCC.”

“And true to his prediction, he got the invitation to appear before the panel.”

Investigation by our correspondent revealed some of the allegations against Magu by Malami.

Some of the 22 allegations are as follows:

A top source said: “Magu and his officers had spent the last two weeks looking at all the allegations and compiled appropriate responses to them with documents.

“It is the compendium of evidence that he took to the panel to prove his innocence. Whatever you may accuse Magu of, it is not corruption or self-enrichment.

“All those who have worked with Magu know him for his incorruptibility. He is also a hardliner who stepped on many toes. It is good that a panel is looking into the allegations.

“Take the case of sales of assets, Magu never sold any assets since he came into office. Instead, the seized properties were allocated for use by government agencies.

“The P&ID matter preceded Magu in office because the judgment debt was during the administration of ex-President Goodluck Jonathan. Magu only investigated the criminal aspect instead of supporting Settlement Agreement. And he gave the case all his strength to get the best for the nation.

“At the appropriate time, the details of what Magu did in office and what really transpired before the panel will be known to Nigerians for posterity.”

The Public Relations Officer of DSS, Dr. Peter Afunanya said: “The Department of State Services (DSS) wishes to inform the public that it did not arrest Ibrahim Magu, Acting Chairman of the Economic and Financial Crimes Commission (EFCC) as has been reported by sections of the media.

“The Service has since 6th July, 2020, been inundated with enquiries over the alleged arrest.”

The EFCC confirmed that Magu went to the Villa to honour an invitation.

A statement by the Head of Media and Publicity of EFCC, Mr. Dele Oyewale said: “Acting Chairman of the Economic and Financial Crimes Commission (EFCC) Mr.  Ibrahim Magu on Monday honoured an invitation by a Presidential Panel reviewing the activities of the EFCC, at the Banquet Hall wing of the Presidential Villa, Abuja.

”He was served the invitation to the Panel, while on his way to the Force Headquarters, Abuja for a meeting.

”The EFCC’s boss was neither arrested nor forced to honour the invitation.  A member of a legal team from the EFCC is also with him on the Panel.”