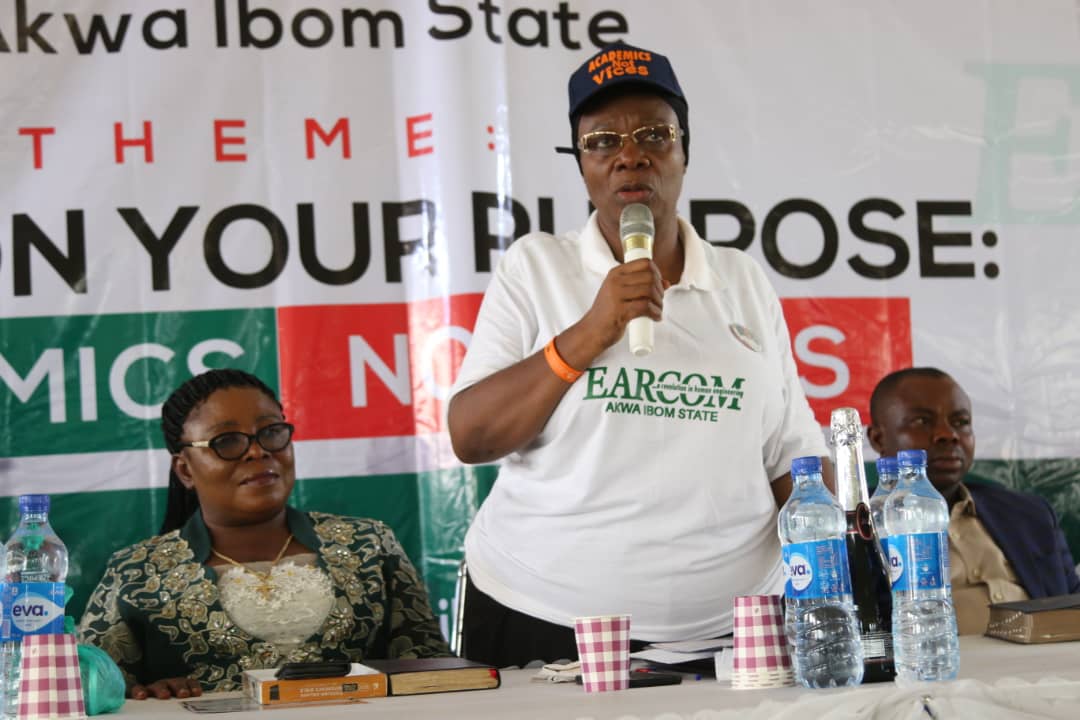 Students studying in Akwa Ibom State University (AKSU) have been advised to focus on their Academic pursuit to achieve better goals, and as well as shun social vices which may destroy their futures.

The Executive Chairman of Ethical and Attitudinal Re-orientation Commission (EARCOM), Dr. Dorothy Thompson, who also represented the Special Guest of Honour and Commissioner for Information and Strategy, Sir Charles Udoh gave the advice in her opening remarks during a One-Day Sensitization Campaign Against Social Vices in the Institution.

Speaking on the Theme ‘Focus On Your Purpose: Academics Not Vices, Dr. Thompson decried the menace of Cultism and other vices in Nigeria, especially in the University community.

Dr Thompson expressed gratitude to the State Governor, Mr Udom Emmanuel for his uncompromising Policies and war against Cultism.

She expressed worry over the character and attitude of Students who have allowed themselves to become distracted and have thus diverted thier focus from their academic pursuit to join bad gangs in schools. The EARCOM Boss stressed that, students should shun social vices which may seem right in a their eyes, but usually end in evil.

She however pointed out that the secret of success is focusing on the purpose of learning and character formation, urging the Students to live a good life so they can better the society.

She equally thanked the Management and Students of the Institution for the opportunity granted EARCOM to hold the Sensitization Seminar in the school.

Also, the Guest Speaker, Professor Effiong Johnson while addressing the gathering described the key word ‘Focus’ as “to hold something continuously, steadily for a time”, adding that, as students, they should understand their purpose, adjust, adapt and focus all their energies in achieving good success in their academic pursuit.

Prof Johnson emphasized that, “The primary purpose of Education is for the illumination of one’s mind, so he/she becomes self-empowered to make qualitative decisions that make life more meaningful. He charged the students to imbibe what he observed, is the cardinal rule of safety, which he said is, “if you ever want to stay out of trouble, follow the rules.”

Prof Johnson who is a former Dean of Students Affairs of The University of Uyo identified the commonest vices in higher Institutions to include Examination Malpractices, drugs abuse, cultism and others, and charged the students to desist from unwholesome acts that may frustrate their lives in the future.

EARCOM Ambassador and popular musician, Mr Xto also charged the students who turned out in their numbers to shun cultism, rascality, prostitution and other vices, but become creative and incline their hearts to wisdom. He said cultism is unprofitable and only leads to failure.

In his exhortation, the Guest Preacher, Pastor Michael Onah, said, the only way the students can achieve their purposes in life is by returning to God and trusting in Him alone.

Others, who spoke during the event were; the Assistant Commandant of Nigeria Civil Defense Corp, E. E. Peters, Elder Isaac Michael, the Representative of the Vice Chancellor of the University, Professor Idongesit Isaac, the Dean of the Student’s Affairs and Dr. Imoh Ita, amongst others.

Earlier, the EARCOM Board, Management Staff and Resource Persons led by the Chairman, Dr Thompson paid a courtesy call on the Vice Chancellor of AKSU, Prof Eno Ibanga in his office.
The Vice Chancellor commended EARCOM for the good work the Commission is doing and described the seminar as a welcome experience for the AKSU Students community, adding that, his administration has zero tolerance for cultism and social vices in the institution.
Prof ibanga said AKSU remains ever ready to collaborate with EARCOM to achieve the goal of eradicating social vices in the society at large and AKSU in particular.