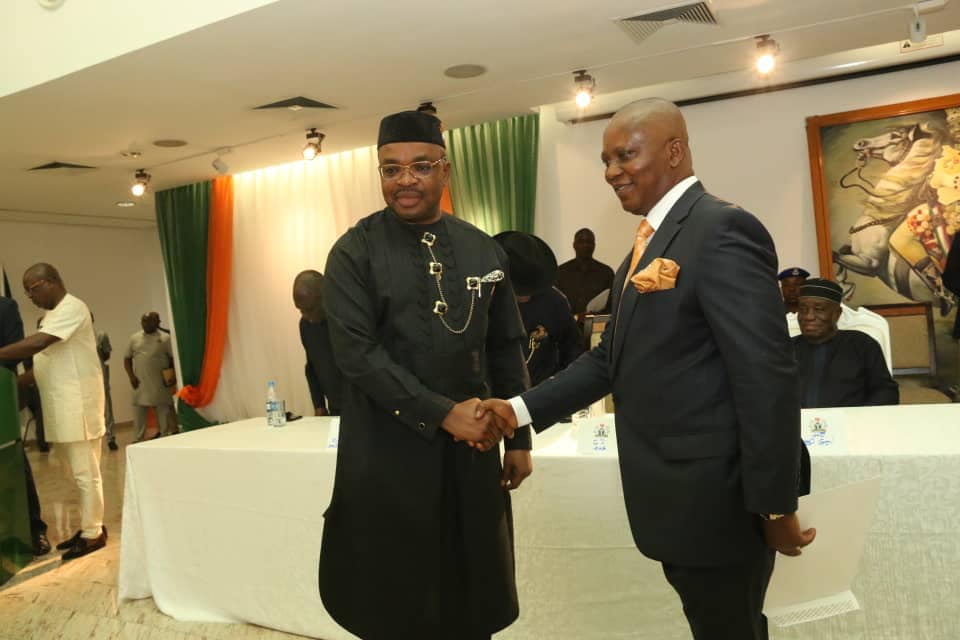 Administering oath of office at the Government House Banquet Hall on Monday, Governor Emmanuel charged the new appointment to raise the bar of excellence in the discharge of their responsibilities.

He announced that more permanent secretaries would soon be appointed, and warned politicians to refrain from lobbying for any candidate to avoid disqualification of the person who may have been appointed.

Governor Emmanuel disclosed that the newly appointees were selected on merit from among the various directors and deputy directors who he personally interviewed.

He restated his commitment to promote excellence and merit in appointments and warned Akwa Ibom stakeholders and political leaders to refrain from mounting pressure on him over political appointments.

The Governor used the occasion and hinted that there is possibility of retaining most members of the immediate past Executive Council because of the numerous projects he needs to complete under their supervision.

He said “Once I receive a name of any director from a stakeholder, it means the person is not qualified and lacks self confidence.”

He expressed his desire to spread the appointments across the Local Government Areas of the State, but decried the absence of qualified personnel from some Local Governments Areas, an issue he said should be of serious concern to stakeholders in such areas.

While congratulating the new appointees, the Governor expressed optimism in their ability to deliver and further urged them to exhibit a high level of professionalism and tolerance in the discharge of their responsibilities.

Governor Emmanuel appreciated the immediate past Head of Service, Mrs Ekerebong Akpan, for her meritorious services to the State and the improvement witnessed in the State’s Civil Service.

The swearing in ceremony was attended by the Deputy Governor,  Mr Moses Ekpo, the State PDP Chairman, Obong Paul Ekpo, former Governor, Idongesit Nkanga, the PDP National Legal Adviser, Barr. Emmanuel Enoidem, past and present government officials as well as families and friends of those appointed.