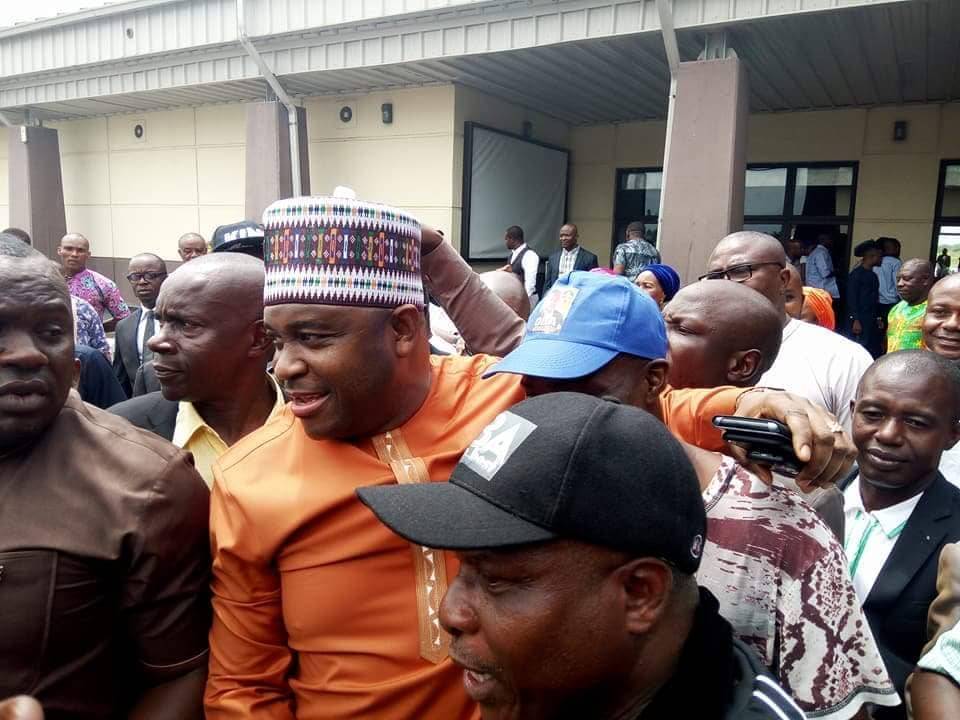 The trial, vilification and traducing of Obong Bassey Albert aka Oba, the once beautiful bride of Uyo Senatorial District is a lesson in history.

As a matter of fact, he doled out cash to many Akwa Ibom people – men, women, youths, less privileged like an ATM machine without ATM card. His philanthropic gesture is second to none after the likes of the current Senate majority leader Chief Godswill Obot Akpabio.

His popularity with the people skyrocketed him to an enviable position as a strong contender for the Akwa Ibom State number one seat in 2015. He had a massively threatening support base. But the zoning system of the PDP disqualified him from contesting. As a loyal partyman, Oba, as he is fondly called opted to serve his people as the Senator representing Akwa Ibom North East Senatorial district. With massive support of the people at his disposal, observers say only rapture would have stopped him from clinging the seat.

However since assuming office as Senator representing the Uyo Senatorial District, Oba has been bedaubed with one polemics or the other.

Firstly, was the Federal High court sitting in Uyo, which gave an unfavourable judgment in a pre-election dispute between him and Hon. Bassey Etim declaring that by estimation of the court, Hon. Etim was the rightful candidate of PDP in the Uyo Senatorial primary of 2015, hence Oba should vacate the seat for Etim.

As he was battling to save his political career in the courts, some members of the Uyo Federal Constituency led by Engr. Uwem Ita Etuk held a conference at the hall of Uranus Hotel, Uyo

calling on him to jettison any plans to run for a second term in office. Ita Etuk noted that “it was time for Uyo Federal Constituency to take up the Senatorial Seat and so far, he has been consulted by a few, and that the region parades one of the best candidates with great capacity to run the race in the 2019 polls.” They later on in separate messages threatened that that “if PDP denies them ticket and gives to OBA, there will be mass defection and support to another Party to Ensure that the rights of Uyo Federal Constituency is not denied”, warning further that “the time to give justice to Uyo Federal Constituency is now or PDP should forget winning election in Uyo Senatorial District.”

Oba, who had consolidated his hold on the Senatorial District through the initiation of live touching projects as well as empowering hundreds of constituents was taken aback by their statements but very confident of the future.

This was at a time when some members of the Uyo Senatorial District led by Sir Val Attah, Hon. Enobong Uwah among others had endorsed Oba to return back to the Senate for his superlative performance which has seen him given scholarship to hundreds, graded and tarred rural roads in the state, and installed street lights and solar-powered boreholes in many communities in Uyo Senatorial District.

As Oba tried to find a balance between his litigation with Etim, and that of the Uyo Federal constituency agitations, the social media space were taken over by news that Senator Oba has been arrested by the EFCC for taken kickbacks in a deal with Mr. Jide Omokore who is under investigation for corruption. As the story spread like wild fire, citizens of Akwa Ibom North East Senatorial District – many of who had benefited from Senator Oba went into a frenzy jubilation.

Though observers noted that it was not uncommon for Akwa Ibom people to celebrate the predicament of one of their own, pundits wonder how these people could forget the good deeds of Oba whose ordeal they are now celebrating. Not withstanding human perceptiveness as political animal in a free-cage, it is disheartening to reconcile the actions of these people which reminisced one of a popular German word called Schadenfreude – meaning “malicious joy in the misfortunes of others”.

Espoused as “damage-joy,” in 1922 in Germany, Schadenfreude, literally exponentiate that people derive joy, “fraude” from the misfortune or damage and harm “Schaden” of others, thus the only explainable thesis for their actions.

However not everybody were hoodwinked by the shred of “Schaden”. One of those persons who stood firm, denouncing those who in their black minds, rejoice over the Senator’s call by the EFCC to clarify “grey” issues was Mr. James Abang, a public affairs analyst. Abang condemned their distasteful habit and gave the resourceful Oba a vote of confidence noting that there was nothing to celebrate about Oba’s invitation by the EFCC which is a routine procedure when there is any gray area that needs clarification. He deposited that Oba is a monumental blessing to the people of Akwa Ibom state who derives his support and backing from God hence no one can bring him down.

On Oba’s rising profile as an ex banker, Abang who is also an ex banker said: “there is nothing fictional about Albert’s banking records. Luckily he spent part of his banking career in Uyo. Apart from the likes of Ben Akabueze who became commissioner in Lagos State and currently the Director General of the Budget office for the Federal Republic of Nigeria, and Henry Seminetari among a few others, I can remember, Albert was one of the fastest growing banker. Check out his age and where he is today. How do you assess God’s blessings on someone’s life,” he asked rhetorically?

Continuing Abang stressed further and philosophical too, that: “by the way EFCC is only questioning him for allegedly accepting a gift. But back home people are talking of looting. Is everything Ok? Abeg, Albert is blessed. If a man have a bigger manhood than yours it’s not because he worked harder than you. God simply blessed him with it. The best you can do is not let your sister get close to him but you can’t take it away from him”, he concluded.

With those wise words of the ancient Athenian days, Abang was able to deal a big blow to those who stood to celebrate falsehood and bring down grace. Looking deep into Abang thesis, Oba albatross may give him many of his supporters sleepless nights but it cannot hurt him. They say, he who God has blessed, no man can curse. Oba may be besmirched with dozens of troubles like Gulliver (in Gulliver Troubles), but know that he will be like a sandpaper which when roughly scratched, hit carelessly, scrubbed on floor and anywhere but at the end, the sandpaper ends up smooth and beautiful.

Bassey Etim litigations haven’t distracted Oba from performing. Uyo Federal Constituency call against his second term is an opinion well noted. EFCC invitation does not mean indictment. As Oba walks through the various compelling albatross, nothing can be further from the truth that, the likely “fear of Obong Bassey Albert,” is the beginning of wisdom. 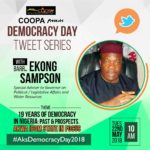