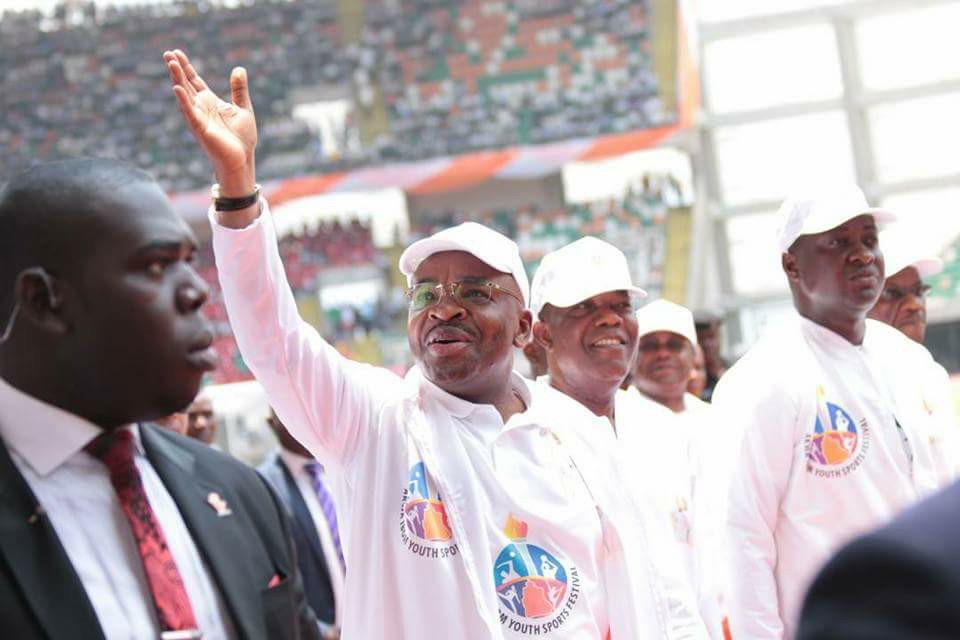 The Akwa Ibom Youth Sports Festival 2018 was ecstatic to the young and nostalgic to the old. Being a second edition, it corrected obvious lapses of the first and consolidated on the gains that edition recorded. The event therefore achieved great feats that has again placed the State firmly on national and continental sports map.

Governance is in every sense omnibus. It takes a leader with insight to discern and identify areas of engagement where the people can usefully apply themselves. When the Udom administration came into being, it opted for a holistic approach with emphasis on areas that would not only engage but would also build the youths, as the slogan goes, and provide them with a secured future.

One of the areas identified by Governor Udom Emmanuel of Akwa Ibom State is sports. But the governor also appreciates the fact that in Sports, investment is directly proportional to output. He has therefore not only shown a willingness to encourage sports, he has also demonstrated remarkable zeal to invest in both sport infrastructure and people who have inclination and talents for the games of sports.

Governor Emmanuel believes that the difference between accomplished celebrities in sports and others is exposure to facilities. With this understanding, he spares no breath in his support for sports. His vision, which he has declared at different fora is to ensure that the national team would be incomplete without Akwa Ibom children. Sounding confident and ambitious, Emmanuel avowed that in no distant future, the national teams of male and female would always have at least five Akwa Ibom sons and daughters respectively. That is where the Most Sports Supporting Governor in Nigeria is taking the State of Akwa Ibom to.

Being a man who walks the talk, he commenced his yearning for sports development with an all out support for Akwa United FC which hitherto was struggling at the bottom of the national league and oftentimes threatened with relegation. Governor Emmanuel’s support and encouragement changed the fortunes of the once drudgery team. For the first time in its existence and even that of clubs from the axis of Cross River and Akwa Ibom States, in the almost 60 years of FA Cup, Akwa United FC clinched the cup in 2015 and repeated the feat in 2017. The Chairman of the Club, Elder Paul Bassey attributes the successes recorded by Akwa United FC to Governor Emmanuel’s financial and moral support. He said that the governor has given the Club the needed wings to fly. Currently, Akwa United FC is representing the country in a continental fiesta and is giving a good account of itself.

Apart from building sports facilities, reinvigorating Akwa United FC, extending support to sports through encouragement and funding, Governor Emmanuel’s rejuvenation of the School Sports Festival would go down as one of the most ingenuous and result oriented sports policy enunciated in the State. The Akwa Ibom Youth Sports Festival is a multi-prong project that is comprehensive in scope and scale as well as reach. It is open to Primary and Secondary Schools in all the 31 local government areas of the State. And so it covers a broad scope, large in scale and is far reaching. It is a platform for the discovery of talents while young with the advantage of a longer duration of engagement. It is also an opportunity for the identification and expression of those latent talents that were hitherto unknown in the children and youths. The reinvention of the sport festival has come to provide the opportunity for young people to appraise themselves to see what talent they can take to the market place and excel. suffice it to say that Akwa Ibom children are maximizing the opportunity as those talents are coming to the fore preparatory to attracting income. Example is Aniekeme who was discovered recently and who is currently undergoing training in the United States. She is already soaring with every likelihood to become a national phenomenon soon.

The Akwa Ibom Youth Sports Festival which returned in 2017 after decades of abeyance if sustained would turn the State into the sports capital of Nigeria. Infrastructure and talents are capable of translating this vision. The first edition of the youth sports festival which debuted in 2017 gave the State a leapfrog in national competition that followed with her clinching a second position in the national fiesta. The Akwa Ibom athletes defeated their counterparts from highly rated States to achieve that feat giving the first edition of the festival a place in the sports history of the State. In that first edition, Oruk-Anam Local Government Area topped the medal table.

In that edition, the Minister for Youths and Sports, Barrister Solomon Dalung who attended the event himself made prophetic avowals about the place of the State in the nation’s sport calendar. He described the State as a model in Sports development hinting that Akwa Ibom is Nigeria’s hope for athletes in 2020 Olympics. In the second edition of the youth sports festival in the State, the minister, who was represented by the Permanent Secretary, Dr. Esther Aluko spoke in the same vein, describing the event as the State’s Olympic game. She said as grassroots sports, the competition is an opportunity for youths to showcase their talents. The representative of the minister said that with what she was witnessing, Akwa Ibom is already on its way to sports excellence adding that the programme is germane to identifying talents. She advised participants to put in their best, remain disciplined and demonstrate team spirit to enable them ascend heights in sports.

The competition which had 26 sporting  activities for the secondary school cadre, 13 for primary school level and 12,000 participants across the 31 local government areas seems purposed to meet Governor Emmanuel’s ambitious goals. According to him, in the next 6 years, Akwa Ibom should produce between 5 and 6 players for the national team. He also pledged that Akwa Ibom would not rest until it produces the Serena Williams, the Usain Bolts, the Ronaldos and the Messis of this world. Being a man who pushes his desires beyond rhetorics, it is just a matter of time before we begin to see the manifestations of this lofty vision.

Sport Festival was conceived in 1973 by the Federal Governor post the civil war as a unifying tool across ethnic divides. The 39 year old competition even though irregular had once achieved its objective. States also tried to replicate same to forge a strong social cohesion across the ethnic groups extant in such States. The competition therefore achieved both the prospecting of talents and forging of unity. The defunct Bendel State maximized youth sports festival to produce national icon in sports and football. Governor Emmanuel is travelling that road with determined gait and renewed vigour to take the State to that limelight in sports and football where it would rightly be referred to as the Sports capital of Nigeria.