The 19-year-old Nigerian designer and founder of the menswear label, started the brand just two years ago with the intent to generate impactful statements through his work

The New York Fashion Week which took place few days ago, came with a historical achievement and it was made by a 19-year-old Nigerian boy, Taofeek Abijako.

Taofeek Abijako became the the youngest designer to present a collection at New York Fashion Week: Men’s this year.

The 19-year-old Nigerian designer and founder of the menswear label, started the brand just two years ago with the intent to generate impactful statements through his work. Previous collections entitled, “Cruel Hands” and “Hooligans,” consisted of apparel with these thought-provoking statements: “Disorder: In Mutiny We Trust” and “Palaver Child.”

“I approach Head of State+ as less of a brand and more of a case study. It’s me digging into my cultural upbringing while trying to have a firm grasp and understanding of it. My belief is furthering a philosophy of thoughtful, inconspicuous, and honest design across the board,” the Nigerian-born designer shared with the CFDA.

According to CFDA, his label “pays homage to his past by celebrating his West African culture through a contemporary perspective, or, as he Abijako puts it, ‘minimalist streetwear approach with social and political commentary.’”

“My dad was a trained fashion designer while living in Nigeria and dealt mostly with local traditional garments. Growing up in an environment like that sparked my curiosity in design,” Taofeek said.

When asked about his inspiration for the street wear brand’s upcoming “Genesis” collection, he shared that it’ll portray “the vibrancy of West African youth culture in the ‘70s and Fela Kuti.” The new collection is guaranteed to be groundbreaking in design and social impact.

The menswear label will be debuting its Spring/Summer ’19 collection at Men’s New York Fashion Week.

Abijako was still a senior at Albany High School when he released the look book for his first collection on his Twitter feed. A few weeks later, when an email from a buyer for the Japanese luxury retailer United Arrows arrived, he assumed it was a prank perpetrated by friends. The buyer asked to visit his studio; since Abijako was working out of his childhood bedroom, he demurred, and instead they met in Manhattan. 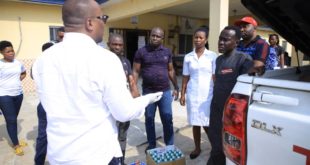 In a bid to help prevent the spread of the Novel Coronavirus disease, The Ini …