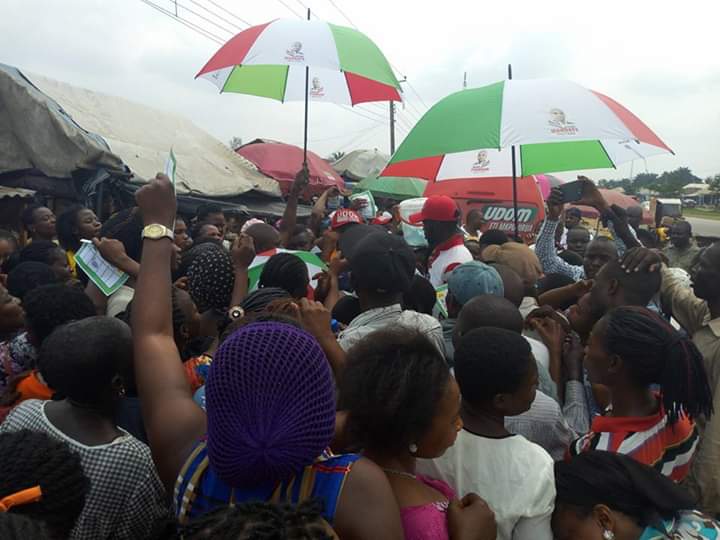 Traders in Akwa Ibom State, who at various fora reiterated their stand regarding the forthcoming general elections, have once again reaffirmed their resolve to mobilize their votes for Governor Udom Emmanuel, the Peoples Democratic Party (PDP) and all its candidates.

The traders who made their position known once more on Monday when the Special Assistant to the Governor on Traders and Market Matters, Akparawa Idorenyin Raphael, and his counterpart on Project Monitoring, Comrade Martins Inyangetoh, stormed Ikot Ambang and Etaha Itam Markets with empowerments packages including disbursement of another phase of Interest-free loans to marketers, reaffirmed for the upthinth time their unwavering resolve to vote en masse for Udom Emmanuel, PDP and all its candidates.

Addressing traders at the respective market grounds, Akparawa Raphael thanked the traders for their solidarity and support for Governor Emmanuel’s administration, informing that over 500 traders from each market will be given the sum of N1,000,000,N500,000,300,000,200,000,100,000interest-free loan to aid their businesses from Wednesday, February 6, 2019.

According to Raphael, “over 1000 traders from Etaha Itam and Ikot Ambang Markets respectively will benefit handsomely from the next batch of Free Interest loan, depending on their respective trading items, as some will go home with over or little less than N1000,000,000, some will go home with atleast N50,000. This gesture according to him, “will render the N5,000 vote buying gimmick of APC led Federal Government meaningless as this has been a tradition since the inception of Gov Udom led state Government, adding that there will continue to be a new dawn for economic boom in the state as Traders will have items in surplus to engage in their respective trading activities”.

He further said ” Your votes for Udom and PDP will be votes for peace, unity, progress, adequate security, economic prosperity and safety”.

On his part, Comrade Inyangetoh, who took time out to sensitize the traders on the rudiments of elections, solicited more votes for Governor Emmanuel and all the PDP candidates.

“It is true that democracy could be described as a government of the people, for the people and by the people, thus the key to victory in any elections lies in the hands of the people. So, since we are in a democratic setting, it was necessary that we the representatives of Government have frequent interface with the people who are the electorates so as to bring dividends of democracy to you in appreciation of your unwavering support in the past years of our being in Government. So, as the period of elections draw near, we are here to tell you the many reasons why you all must continue to vote for a party and government that has done well for the traders. When you vote Gov Udom back to the hilltop mansion again, he will do more for you. More free interest loans, free ticket days, appointments, New market structures and other empowerments. So, Vote Udom Emmanuel, vote PDP, Vote the Umbrella, ” Inyangetoh maintained.

Responding, the traders expressed gratitude to Governor Emmanuel and lauded him for keeping to his promises, saying “we thank you for being a promise keeper, a man of peace and goodwill. Be assured that our votes are intact for you.”

It is worthy to recall that over 50,000 traders have so far benefited from the first, second and third phases of the Akwa Ibom State Government’s N2billion revolving interest-free loan, which commenced in 2016.

Highpoint of the visit was the distribution of Aprons, Hat and Umbrella, other empowerment packages and cash gifts appreciation to Traders.