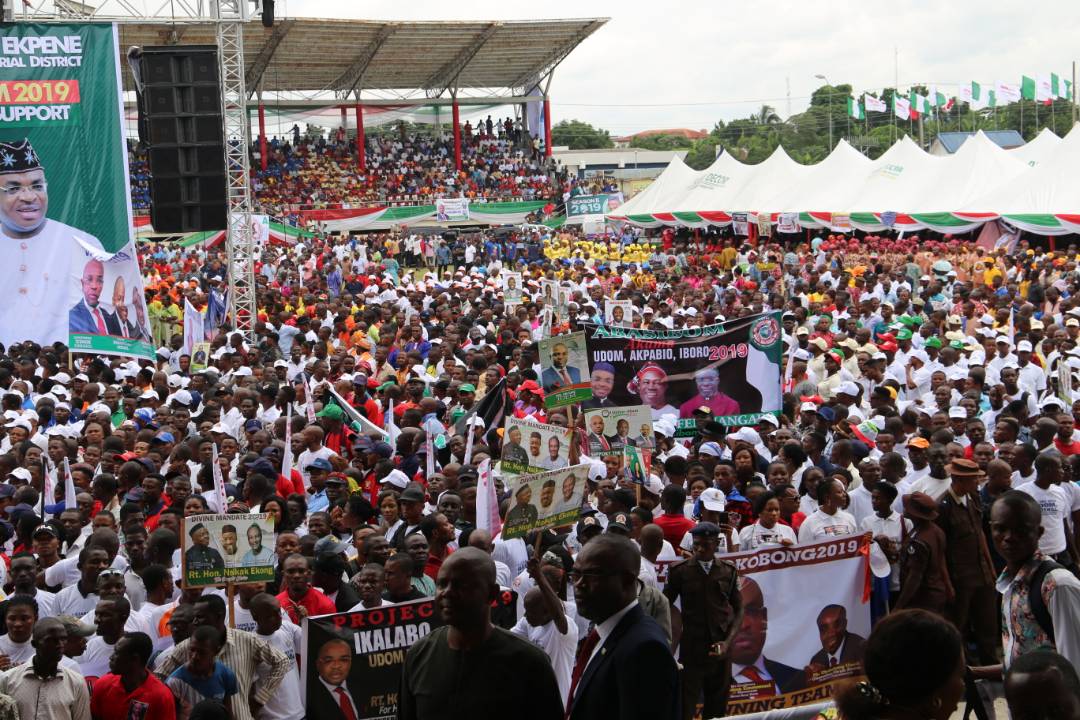 The people of Ikot Ekpene Senatorial District of Akwa Ibom State have announced their resolve to shore up support towards the re-election of Governor Udom Emmanuel for a Second Term in Office.
Also endorsed for a second term in office, is the Senate minority Leader, Senator Godswill Akpabio.

It was a gathering of several thousand of women, youth, Socio-political and Cultural groups, the PDP family and lovers of good governance who trouped to the Ikot Ekpene Township Stadium in colourful attires to demonstrate their support to the Governor and the Senate Minority Leader.

Setting the tone at the event, the chairman on the occasion and former deputy Governor of the State, Dr. Chris Ekpenyong described Governor Udom Emmanuel as their worthy leader and Son -In-Law.

He maintained that Mr Emmanuel was a strategic planner, strategic thinker and strategic leader, who has lived up to his billing, hence their decision to support his election for a second term in office.

He also announced their endorsement of Senator Godswill Akpabio’s re-election, expressing the belief together that together with the Governor, they would continue to bring more benefits to the people of the district.

Other who also spoke included Senator Emmanuel Ibok Essien, who said the Governor has defied the economic challenges in the country to make the state the best among other states, assuring that the entire votes in his federal Constituency will be emptied into PDP.

On his part, Obong Eno Akpan a former House of Representatives member who spoke for the people of Ukanafun/Oruk Anam Federal Constituency, said his people with over 200,000 votes are resolute in supporting the Governor and their Senator for a second term in office.

It was not a different verdict for a financial expert and former Commissioner of Finance in the State, Sir Sunday U. Akpan who described the Governor as the best financial manager and a role model to other states, and threw the weight of his people Ikono and Ini Federal Constituency to the Governor for a second term.

Sir Akpan also clamoured for Senator Akpabio’s Return as a voice that can echo the widespread call for restructuring and restoration of true federalism in the country.

This view was corroborated by Barr Emmanuel Enoidem, the PDP national legal adviser, who spoke for both the PDP headquarters and the Abak Federal Constituency as he expressed the Confidence of the Party in the Leadership of the Governor and the Senate Minority Leader.

He said the Duo would have no opposition in the September primaries ahead of the 2019 general elections.
Responding, Senator Godswill Akpabi, who was accompanied by his wife Mrs Ekaete Akpabio, thanked the people for the support to him and the Governor.

He recounted his numerous Senatorial Office empowerment schemes to the people in the district, while many projects including roads, school blocks, and mini water projects, among other have been brought to the district.

Governor Emmanuel, who could not shield his emotions, expressed gratitude to the district for the show of Love. He thanked the party for accepting o stand by the decision of the people
The Governor recounted the Strides his administration in the District, maintaining that the enablers and infrastructure in place, were meant to make the industries realizable.

“You don’t build industries on nothing and that is why we are building the roads, the power substations and ensuring security in the state.”

Among the projects, the governor cited were the Fertilizer Blending Factory in Abak, The first digital hospital in the State located at Ikono, the ongoing remodeled General Hospital at Ikot Okoro, the proposed bamboo factory at Oruk Anam, the Naval Technical College at Ikot Ntuen, the Palm Kernel and Cassava processing centers in the district as well as the Rice farm and mill at Ini which is producing the best homemade rice in the country.

“ When we came in, two cups of Garri were sold for 200 naira, now, we are able to get 11 cups by 200 naira,” the governor announced, adding that, “by December this year, we will get all the rice we need from Ini.”

He said his investments in roads and electricity in the district are catalysts for industrial boom, adding that his efforts have opened up the state, linking the local government areas and also linking the state to other neighboring States for upsurge in economic activities.

Highpoint of the event, were presentations of symbolic souvenirs to the first family and the senate minority leader, by the people, to seal their resolution. 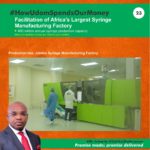