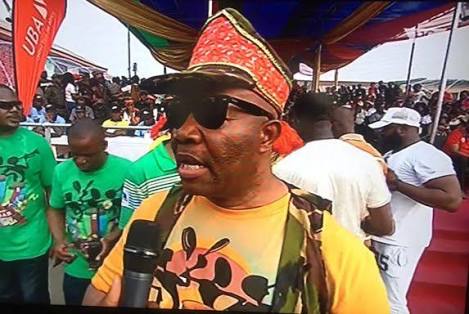 If laughter is the music of the soul, Senator Godswill Akpabio surely knows how to modulate its tempo. He is at best when he is laughing at us while getting us to laugh with him. A cool, calculating satirist, he trains his eye on our hidden howlers and famous foibles, making jest of our mannerisms, from the way we reach for each others throat in political pugilism.

Akwa Ibom is today full of drama and Akpabio is even fuller of drama, as if he and the state were made for each other and for drama. He will never miss out on the theatre. If he does not meet with the theatre, he would have to invent it. He loves the fight. He dares his opponents.

Every political drama must have a climax. If any political scientist is interested in researching the facts that predispose the collapse of political empires, he does not need to go far. Akwa Ibom appear inviting to the hopeful scholar and Akpabio may turn up a treasure throve of remote and immediate causes.

As Akpabio finally unravels, stumbling from one political misjudgement to another, he reminds one of a dazed boxer who is unable to gather his scrambled wits together. If he doesn’t end up biting the referee in frenzied disorientation, he may yet set the rigged canvas ablaze in a desperate act of terminal frustration.

It is no longer news that the honeymoon between Akpabio and Governor Udom Emmanuel has ended, though not totally unexpected. But Akpabio elevated the faceoff to a bizzare dimension when he said his imposition of Udom as Governor in 2015 was a mistake. Even Aristotle would chuckle. Less than 24 hours, he recanted.

In far away Enugu where he went for the burial of his grand mother in-law, he likened the 2019 governorship election to Adolf Hitler’s invasion of Poland. He was not under any obligation to speak on the 2019 guber poll in military terminology but he chose to. He sounded the drum beat of war. Governor Udom Emmanuel, the man at the center of the storm fired back, threatening in less than subtle terms that he’ll expose Akpabio’s if dared. One thought to be incapable of belligerency, Governor Emmanuel of today seems to be a Rambo, taking on Akpabio as well as the Ukana cabal in one fell swoop.

The rtheotics has heightened the tension index of the state. Bloodshed appears inevitable. At least so it seems. Nothing could be more interesting.

There is nothing that has a beginning that does not have an ending. In the ebbs and flow of history, civilizations and empires rise and fall with unfailing rigour, leaving only their monuments as benchmarks.

The gift of sincerity is one of the most wonderful assets any man can possess. However, a man who is insincerely wrong and is blissfully unaware of his predicament is in a very precarious situation.

Just when we thought some false peace has returned to Akwa Ibom, a play, synonymous to the type written and directed by Papa Ajasco went viral on the social media on Tueaday, August 21, 2018 at about 7:36pm.

Putting it sardonically, like a line well-rehearsed from a satirical play, it continued; “Divisional Police Officer and Commissioner of Police should intervene”.

It is not just the fallaciousness of this claims that offends but the philosophy that accompanies it. All these to achieve what, many asked.

What results from these dramatic figurations is a rib-crackingky funny reaction from Nigerians and Akwa Ibom indigenes with a sobering tragic under current. If Akpabio cannot lighten our yoke, he must not increase it because truth is like oil, no matter how much water you pour on it, it will always float. We have to reconcile reason with truth, so that the argument that will follow may be truth and just.

Akpabio should know that Akwa Ibom people will never remain fools forever or what the Americans call cheerleaders. When they laugh, we laugh. When they smile, we smile and when they cry, we cry also. We are not zombies.

A keen observer of the ongoing Akpabio drama is likely to react to this latest joke coming from our own Pentagon in Ukana with a shrug of the shoulder. Even a child knows that Akpabio’s residence in Ukana as a former Governor and now Senator is “fortified” with a Mobile Police base just meters away and he moves with DSS, Army and Mobile Policemen. No fool, in his right senses will dare to attack. Besides no one, not even his worst critics will want him dead. Not even God because even God wants Akpabio to be alive to see the manifestation of God’s glory with the outcome of the 2019 elections.

Agreed when the center can no longer hold, you need to do everything possible to prevent your hopes and aspirations from falling apart. After all, a desperate disease needs a desperate cure. But we must exercise caution at the rate we tend to fake security breaches and sex up intelligence reports for possible frame ups. We have as a people travelled this road before. Let us in God’s name avoid this road to Kigali.

No where is the lack of civility and the descent to barbarity in our polity better demonstrated than what is playing out in Akwa Ibom today. The absence of civilised rules of engagements to guide the actions of political actors is once more placing the state on war footing. We don’t need Warsaw neither do we need an Adolf Hitler. Casting a purely electoral process in military signs and symbols should not come from a man who should ordinarily be seen as a statesman.

A return to sanity can restrain the darkness which is already so visible in the horizon; a gloom that threatens to hold the light of our state once again in preventive detention to our collective detriment. Our politics of 2019 is getting so bad that it is not only what is said or what is done that raises the tempo of fear and trembling, but what is plotted.

To the security agencies, what is playing out does not require extraordinary brilliance to guess that given the pre-election build up in Akwa Ibom, some segment of the state could be susceptible to politically instigated violence by some politicians. This moment calls for patriotism and professionalism on their part. Anything to the contrary may spell doom.

Politics is a game of number, superior strategies and issues. Not a game of killing, maiming, assassination and destruction. Though every Rome has its own barbarians, this state has seen too much blood already. It should be allowed to see no more. Whoever orchestrated this propaganda surely do not wish my Senator well.

Peace to our fatherland!