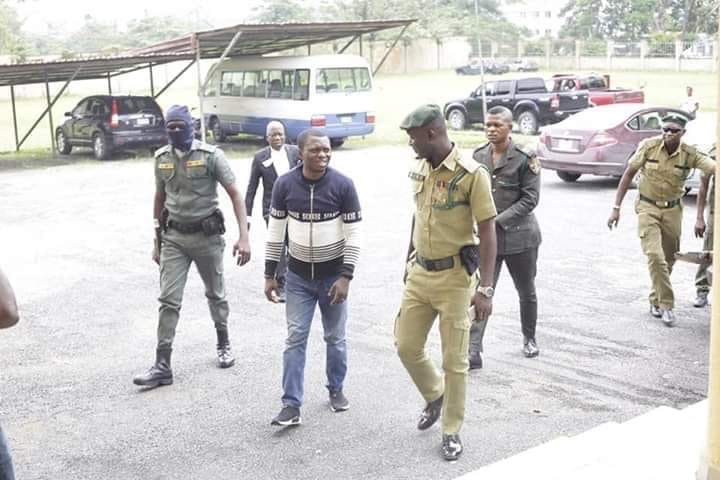 A Federal High Court sitting in Calabar, the Cross River State capital and presided over by Justice Simon Amobeda on Wednesday granted leave to the prosecution to mask its witnesses in a case against journalist and rights activist, Agba Jalingo.

Justice Amobeda in his ruling on relied on Section 33 and 34 of the terrorism prevention and amendment act 2013 as well as international conventions including those of the United Nations and African Commission of Human and People’s rights among others to grant the plea of the prosecution.

The public and the press will not be allowed into the Courtroom when the witness is testifying, Justice Amobeda ruled.

He also held that the witness will testify behind curtains in a cubicle and to a camera. The defendant and his counsel will also not be privy to the name, alias or any other detail of the witness.

The prosecution counsel, Dennis Tarhemba had on October 11, 2019 filed a motion seeking the amendment of charges and to protect witness.

The order was sought based on Sections 33 and 34 of the terrorism prevention and amendment act 2013; section 216 sub section 1 of the Administration of Criminal Justice Act and Section 6 of the Constitution of the Federal Republic of Nigeria as amended.

The motion was supported by an 8 paragraph affidavit deposed to by Inspector Ihezuo Ibe and accompanied by a written address.

During the hearing, the counsel to the defendant, James Ibor submitted that the defendant does not constitute a threat and faulted the application for the masking of the witnesses as there was no proper evidence as to when, where and how the witness was threatened. He also said that the person said to have carried out the threat was not named even as he posited that masking of the witness will not be in the interest of justice.

The matter was adjourned till Wednesday, October 30, 2019 for commencement of trial with Jalingo remanded in the custody of the Nigerian Correctional Service where he has spent 29 days so far.

The trial could not commence on Wednesday as scheduled due to the absence of the prosecutor. The Court had ruled on Tuesday that it will begin sitting on the matter by 10:00AM on Wednesday. However, Mr. Tarhemba arrived the court at a few minutes to 11:00AM shortly after the Judge had concluded his ruling and adjourned the matter.

Jalingo had in a published article in July, queried the whereabouts of the NGN500 million approved and released by the Cross River State government for the floating of the Cross River Microfinance bank.

In August, the Police invited him to answer to a petition bordering on the article. Originally slated for August 19, 2019, it was rescheduled to August 26th and later September 9, 2019.

But, he was arrested by the Intelligence Response Team of the Nigerian Police Force at his Lagos residence on August 22, 2019 after staff of his wife were tricked and held hostage for more than four hours to provide his whereabouts.

He is reported to have endured a whole day’s journey by road to Calabar after the police officers refused traveling with him by air and spent 34 days in police custody of which 32 were at a black site facility with controlled access.

He was arraigned for his bail hearing on September 25, 2019. And, after two more Court appearances, Justice Amobeda ruled on the fourth appearance on October 4th that there was no sufficient evidence to prove his failing health, therefore, cannot be admitted to bail.