According to a release by the State Deputy Governor, Mr. Moses Ekpo, MFR, and Etop O.F. Ekpo, son to the deceased, the funeral arrangement will commence tomorrow, Tuesday, March 6 with the opening of the mourning house at the deceased compound, 32 Ikot Okoro Road, Abak by 9am.

This will be followed by condolence visits to the family immediately from 12 noon of the same day and continues through Thursday, March 8, 2018.

Accordingly, the release enjoins members of the public, family, friends, associates and sympathizers to join in bidding Elder O.F. Ekpo, a final farewell as his remains will be laid to rest after a funeral service to be conducted by the Qua Iboe Church Nigeria led by its General Superintendent, Rev. Ekpedeme Moffat, which will be held at the Government Technical College grounds, Abak by10 am, after the lying-in-state ceremony at the deceased compound between 8 am to 9 am, on Friday, March 9.

The funeral program will be rounded-off with a Memorial Thanksgiving Service at the Qua Iboe Church, 47A Ikot Okoro road, Abak by 10 am on Sunday, March 11, 2018.

The late Elder Ekpo, a devout Christian, was a veteran teacher, an astute Public Servant and a renowned oil industry expert who retired as a Senior Manager, Technical Services Department of the Port Harcourt Refining Company, PHRC, a subsidiary of the NNPC, in 1995.

Previous FICTION: INNOCENT BUT BURNT ALIVE
Next Why Akwa Ibom is a dream come true for Sports Tourism in Africa. 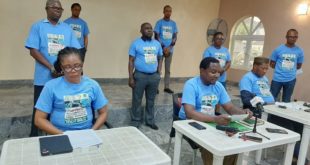 Health Workers in Akwa Ibom State, have called on the government to apply a partial …