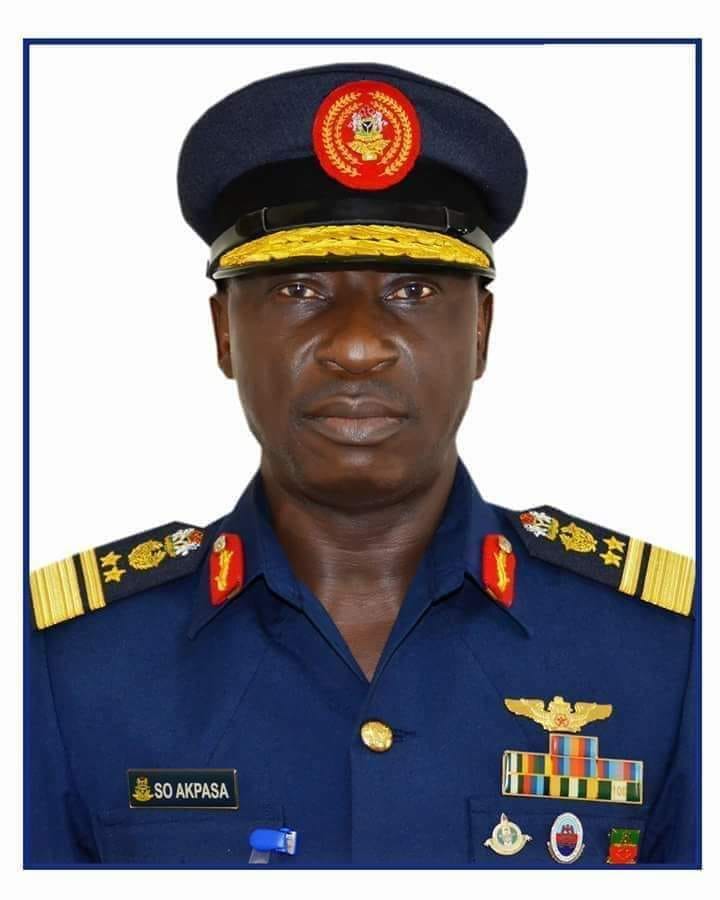 Akwa Ibom has recorded another major military feat with the appointment and assumption of office of a two-star general from the state, Air Vice Marshal (AVM) Sampson Okon Akpasa, as the Air Officer Commanding (AOC) the newly-established Ground Training Command of the Nigerian Air Force (NAF), Enugu.

AVM Akpasa’s appointment, announced recently as part of a major shake-up in the NAF by the Chief of Air Staff, Air Marshal Sadique Baba Abubakar, is the latest in a series of strategic military appointments that have come to Akwa Ibom since President Muhammadu Buhari assumed office two years ago.

A command in the Air Force and Navy is an equivalent of a division in the Army.

Those units are the Military Training Centre, Kaduna, the Regiment Training Centre, Kaduna, the Base Services Group, Enugu, the NAF Station, Jos, the NAF Hospital, Jos, the Senior Non-Commissioned Officers Leadership and Management Academy, temporarily in Kaduna, the NAF School of Finance and Accounts, Badagry, the Communications Group, Enugu, and the NAF Institute of Administrative Management, temporarily in Kaduna.

Contacted on telephone, AVM Akpasa, said he hoped to put up enduring structures and set standards in the new command.

The indigene of Nkwot Etok village in Odoro Ikono (Ikono North) community of Ini Local Government Area (LGA) said he was not intimidated by the enormous challenges of starting the newest of the NAF’s six commands because “we are trained and brought up to handle situations like that.”

Speaking when he received the new AOC in Government House, Enugu, on Friday, Governor Ifeanyi Ugwuanyi of Enugu Statecongratulated AVM Akpasa on his posting to “this new and obviously very important and strategic office”, which is equivalent in status to the General Officer Commanding (GOC) of an Army Division, noting that the feat was demonstration of the confidence the hierarchy of the Nigerian Air Force reposed in him to provide effective leadership for its formations in the new platform.

He added that his administration has always maintained and enjoyed a cordial working relationship with the Force through its pre-existing formations and establishments in the state “all of which have consistently partnered with and assisted us in many areas of necessity more especially, security and education”.

“As a matter of fact, I consider myself privileged to have received the pioneer head of the new Command and therefore, on behalf of the good people of Enugu State, I welcome you to the state and I assure you of our warm wishes, goodwill and friendship”, Gov. Ugwuanyi pledged.

A seasoned pilot trained in Nigeria, the United States of America and the United Arab Emirates, AVM Akpasa holds a Bachelor of Law degree from the Ahmadu Bello University and a Master’s degree in Strategic Studies from the University of Ibadan.

Before his new appointment, he was the Director of Safety at the NAF Headquarters, Abuja, a position he held since August 2015.

AVM Akpasa, who was promoted to his present rank in December 2014, previously served as the Commander of Quick Response Force, Minna, the Director of Plans at NAF Headquarters, Abuja, and the Senior Air Staff Officer (second-in-command) of the Tactical Command, Makurdi, the NAF’s number one command.