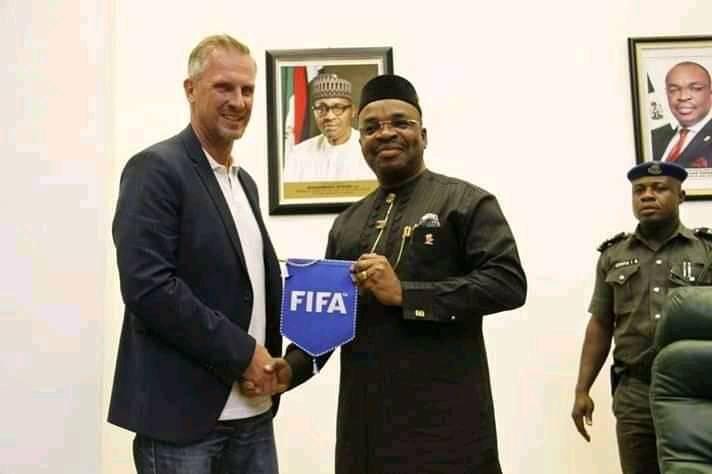 Governor of Akwa Ibom State, Mr. Udom Emmanuel has assured the visiting Fifa delegation led by the NFF President, Amaju Pinnick, that the state is ready to host the 2020 Women World Cup tournament.

Emmanuel gave the assurance when the Fifa delegation paid him a courtesy call at the Government House, Uyo.

He solicited for Akwa Ibom to be given the right to host both the opening and the closing ceremonies when the Mundial commences.

The governor noted that the choice
of Uyo as one of the stadia earmarked to host the Mundial is a mark of appreciation for the State’s contributions towards the development of football in Nigeria.

He informed the visitors that the state has three teams currently in the Premiership.

He remarked that Uyo has a functional Airport and a good network of roads for easy air and road transportation.

The governor also intimated the Fifa delegation that apart from owning an airport, Akwa Ibom is the only state in the country that runs a commercially viable airline with a business model that allows visitors from outside to come in, transact business and can return the same day.

Besides, Emmanuel also assured that the state has good medical facilities that can cater for any number of teams and visitors expected in Uyo during the tournament.

In terms of security, the governor disclosed that Uyo will be the first city to have a safe city security system in Nigeria which is expected to be operational from the end of this year.

Earlier the President of the Nigeria Football Federation, NFF, Amaju Pinnick told the governor that they in the state to inform him on the choice of Uyo by Fifa as one of the cities that will host the under 20 Fifa women World cup tournament in 2020 in Nigeria.