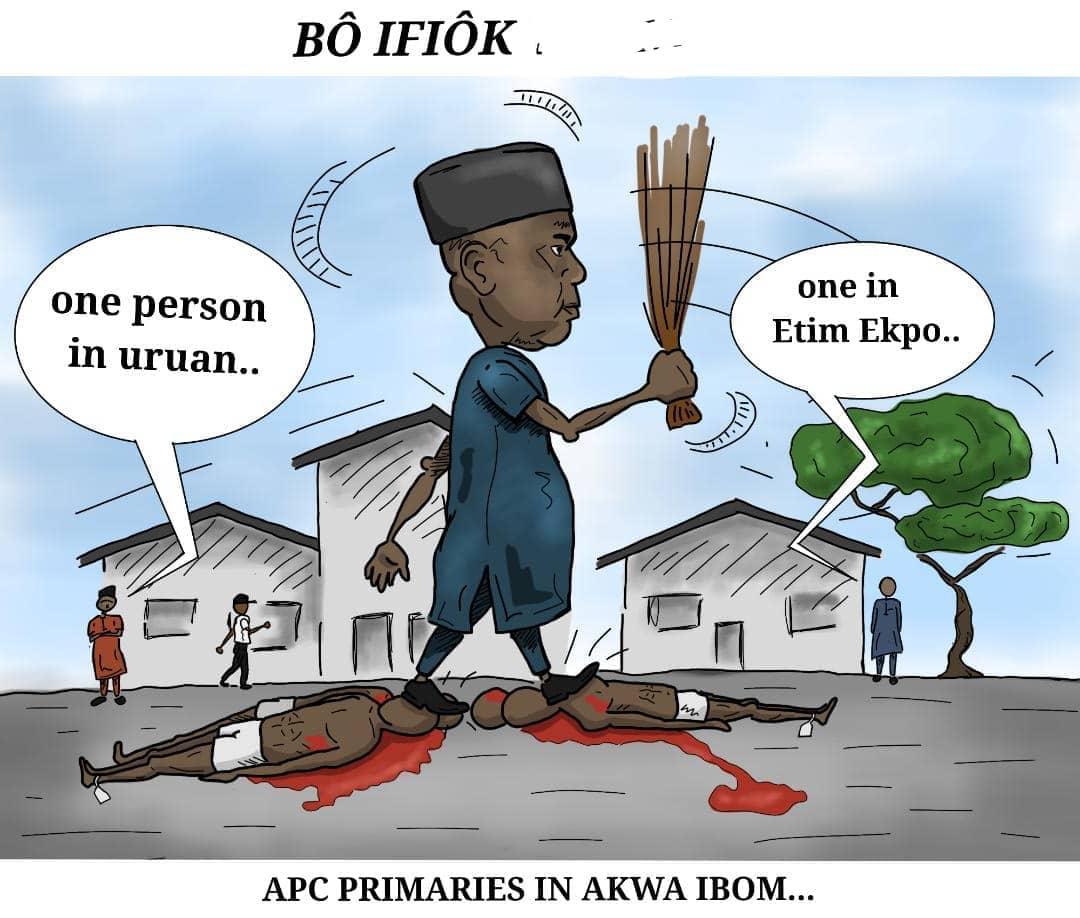 APC is founded on the blood of Nigerians. In Akwa Ibom State, the recently conducted primaries of the party showed glaringly that APC was incapable of promoting the security and welfare of Nigerians which is the primary objective of government.

The modus operandi of the party, its composition and aspiration jog my memory to the reign of terror in France orchestrated by an ambitious statesman and member of the Committee of Public Safety, Maximilian De Robespierre. During the French Revolution, the young man initiated a new order through which those opposed to the new regime were killed by guillotine or ‘National Razor’.

By the time the Reign of Terror ended in July 1794 with the death of Robespierre, some 17,000 people had been officially executed by guillotine or ‘National Razor’, and as many as 10,000 had died in prison or without trial.

One of the greatest lessons of The Reign of Terror (1793-94) is the need for structural frameworks to protect society from the desperation and uncontrollable zeal of renegades, because as the English- Catholic Historian, Lord Acton posited, “power corrupts, absolute power corrupts absolutely”.

Political analysts, historians, lawyers and rights activists are in congruence that the period May 2015 in Akwa Ibom was the apogee of blood politics. Otto Von Bismarck, the Prussian Chancellor was the first to officially make ‘blood” an instrument of foreign policy.

It is believed by majority in the state that the regime thrived in oppression, annihilation and ultimately the blood of Akwa Ibom people. Media reports indicate that the regime subverted every opposing and dissenting voice. For instance, the murder of Okon Uwah, a former Deputy Speaker of the State HOA, Albert Ukpanah, Effiong Ononokpono, the Ekpenyong brothers, Madam Udonwa, Charles Umanah, a former Chairman of Uyo Capital City Development Agency, among others, demoralized the state and questioned the the inability of government to protect the citizenry.

It has been posited that a little above 1000 Akwa Ibom people were openly and remotely murdered through ‘the razor’ of killers, kidnappers and armed gangs.Although this figure appears huge and seemingly speculative to the writer, truth is, it was the black era in Akwa Ibom history from which the state hasn’t recovered.

From available data, the difference between the Reign of Terror in France and the catastrophic pogrom in Akwa Ibom was that, while the former lasted for just 11 months, the later thrived for about 8 solid years.

Again, the event took the form of pogrom and ethnic cleansing. Unfortunately, the Ibibio were the worse- hit. On the whole, the Machiavelian -styled leadership was aimed at subverting opposition by instilling fear in the people. It worked for Atilla De Hun, Adolf Hitler and Joseph Stalin. It succeeded too in Akwa Ibom.

Social change has both functions and dysfunctions; the era witnessed an upsurge in infrastructure and political awareness. However, the essentials of development were against the people, who were meant to be the ultimate beneficiaries, as there was no conscious effort at engendering sustainable livelihood.

A livelihood, according to Chambers & Conway,”is sustainable when it can cope with and recover from the stresses and shocks and maintain or enhance its capabilities and assets both now and in the future without undermining the natural resource base”. Sure the picture is getting clearer!

Now, the crux of my writing. Isn’t it ironic, reprehensible and horrifying that members of the dreaded gang of killers who hitherto were at conflict with each other due to the egoistic preponderance of their gang leader have re- united for the goal of reintroducing a system that would encourage ‘primitive accumulation’?

Would any peace- loving person in Akwa Ibom chose to sacrifice the tranquility being enjoyed in the state under Udom Emmanuel on the alter of self- aggrandizement? It’s the impression of the writer that “more money cannot buy peace and unity…

Historically, perpetrators of oppression equate their actions with Justice, because, in their thought, “anything other than their private interest is injustice”. For instance, Robespierre had this to say, as justification for Terror, “Terror is nothing other than justice, prompt, severe, inflexible…”. Of course, to Adolf Hitler, the war he took to Warsaw was a ‘defensive action’.

So, in the Akwa Ibom context, the anticipated bloodletting is the egoistic battle for political survival and control of state resources.
The view of Senator John Akpan- Udoedeghe, an APC leader in the state, that ‘all the killers of Akwa Ibom people are now in APC is instructive . Flowing from the above, the choice of Nsima Ekere by the blood- thirsty APC is to complete the reign of terror in Akwa Ibom and deepen primitive accumulation.

Pundits have argued that Ekere’s blueprint is not only to decimate the population of Akwa Ibom through intimidation and killings as exemplified recently in his party’s congresses, but ultimately to “donate” Akwa Ibom and its resources to the Hausa/ Fulani imperialists and the Yoruba Capitalists under Bola Tinubu. If this thought holds any water, then APC is the real enemy of Akwa Ibom people.

The crisis that ensued in the LGAs of Ukanafun and Etim Ekpo were most likely the vestiges and hangover of the terror regime. Many believe that the perpetrators of the gruesomeness were bandits who were used as ‘political executioners’ during the dark age in the state, thanks to Udom Emmanuel, a child of necessity and destiny.

Under Governor Udom Emmanuel, there is security of lives and property. There is prosperity and hope for all indigenes and residents in the state. The last three years in Akwa Ibom has witnessed an upsurge in industrialization, job and wealth creation and above all, political tolerance. Also, with the proscription of cult groups and cultism in the state, ‘blood’, no longer determines the social relations in the state. Put differently, it has ceased to be an instrument of governance.

As Akwa Ibom people go to polls to elect their Governor and other representatives, it behove them to throw their hat on the side of destiny. They should vote for whoever would ensure they sleep with both eyes closed. They should choose a leader whose ambition is founded on the Akwa Ibom project as conceptualized by our forebears. The Akwa Ibom project is about the unity, peace and prosperity of all groups and shades in the state.

Uwemedimoh Umanah is an Historian