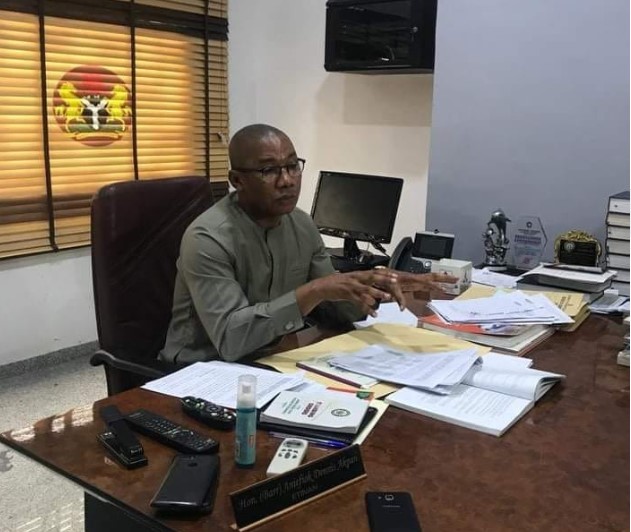 The Deputy House Leader and Chairman of Akwa Ibom State House of Assembly Committee on Information Hon. (Barr) Aniefiok Dennis has cleared the air on the powers of the House of Assembly to suspend erring Local Government Chairmen in the State.

Briefing Assembly correspondence immediately after today’s plenary, the Etinan Lawmaker and spokesperson of the 7th Assembly who has over twenty (20) years post-bar experience before assuming public office highlighted his points citing relevant sections of the 1999 constitution as amended and the Akwa Ibom State House of Assembly’s Standing Orders (6th Edition)

He pointed out that section 128 of the 1999 constitution (as amended) provides the house such powers as quoted;

“(1) Subject to the provisions of this Constitution, a House of Assembly shall have power by resolution published in its journal or in the Office Gazette of the Government of the State to direct or cause to be directed an inquiry or investigation into –

(a) any matter or thing with respect to which it has power to make laws; and
(b) the conduct of affairs of any person, authority, ministry or government department charged, or intended to be charged, with the duty of or responsibility for –
(i) executing or administering laws enacted by that House of Assembly, and
(ii) disbursing or administering monies appropriated or to be appropriated by such House.”

The Etinan Lawmaker further pointed out that the law guiding and having to do with the administration or otherwise of the Local Government i.e Akwa Ibom Local Government Administration Law 2017 (as amended) was enacted by Akwa Ibom State House of Assembly. This inherently gives the assembly the legislative competence to the aforementioned matter.

For purposes of clarity and avoidance of doubt, Order 9 Rule 20 states as quoted:

“(1) There shall be a committee to be known as the committee on Local Government and Chieftaincy Affairs.
(2) The functions of the committee shall include:
(a) Overseeing the activities of local governments in the state.”

Section 3 of this rule further gives the committee jurisdiction over local government matters which clearly shows the nexus between the Local Government Councils and the State House of Assembly.

He thereafter said that the position of the state assembly is to give a fair-hearing in the matter making reference to the Late Justice Chukwudifo Oputa. Hear him;
“Justice is not a one-way traffic but a three-way traffic which is justice for the petitioner, justice for the accused and justice for all (the society).

“It is interesting to note that Section 44 of the Akwa Ibom Local Government Administration Law 2017 (as amended) clearly stipulates the role of the legislative council in (subsection 1 – 4) and the House of Assembly in (subsections 5 – 14) in the removal of Chairman or Vice-Chairman but we are talking about investigating of misconduct here and not removal. It therefore goes without saying that the House of Assembly has unfettered legislative competence to assume jurisdiction over this matter.”; Hon. (Barr) Dennis said.

In conclusion, the spokesperson of the 7th assembly said it was pertinent to throw more light to the public that the action of the assembly is not to remove the council chairmen but to rather give them a fair hearing and by doing this, the affected Chairmen has to step aside during the course the committee’s investigations.