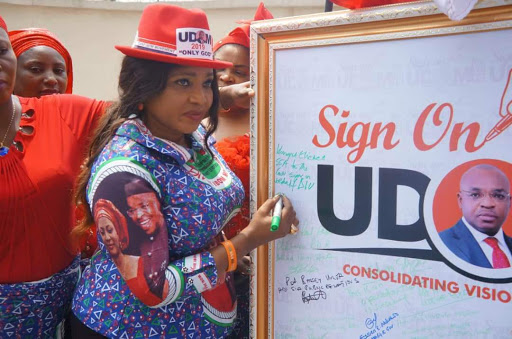 Featuring in a live Radio interview, Monday, the Governor’s aide maintained that the vision of approving a ‘school on Radio’ programme to avail students an opportunity to receive learning while observing temporary school lockdown stands the Governor out as a very competent leader.

Opening up on the implementation of the education on radio programme, Mrs Etiebet explained that
” The Education Commissioner, Professor Essien, after the Governor’s approval, immediately set machinery in motion to kick off the Radio programme.

Etiebet who is a member of the Production team of the programme, maintained that “We deliberate on the topics and curriculum to be presented. I belong to the production team, I go to AKBC radio to join in supervising the production.”

The SSA furthered that the programme has so far received plaudits from members of the public, but noted that government has equally taken note of some observation and inputs for a better service delivery.

She urged parents to avail their wards and tune in 10 minutes before the commencement of the radio programme and also ensure that their children do the assignments given.

Etiebet said “the tutors give out their phone numbers at the end of the class to enable feedback and so far it’s been encouraging.”

The Governor’s aide noted that upon his assumption of office in 2015, the Governor paid premium to quality and efficient healthcare delivery by revamping the health care system in the state.

Etiebet explained that as if the Governor saw ahead what was to befall the world, he wasted no effort in revamping existing healthcare facilities in the state and also went ahead to build and equip new General Hospitals in the state with standard facilities.

The Education Monitoring boss, expressed displeasure towards the behaviour of some citizens of the state as it pertains to the pandemic as she warns that disease is real and has killed over a hundred in the country.

She urged them to wear their mask properly, practice what’s in the COVID-19 guidelines as well as admonished everyone to pray at home as the church is in the heart and not in the church building.

Etiebet thanked the Governor, Udom Emmanuel, the Commissioner for Health, Dominic Ukpong, the State Secretary General Emmanuel Ekuwem who is the chairman of the COVID-19 Response Committee and the entire team for their selfless efforts in salvaging this pandemic.

She said” excellent grade, the Governor and his team have done superbly well. They work round the clock to ensure we are safe even late at night. I want to thank the team.”