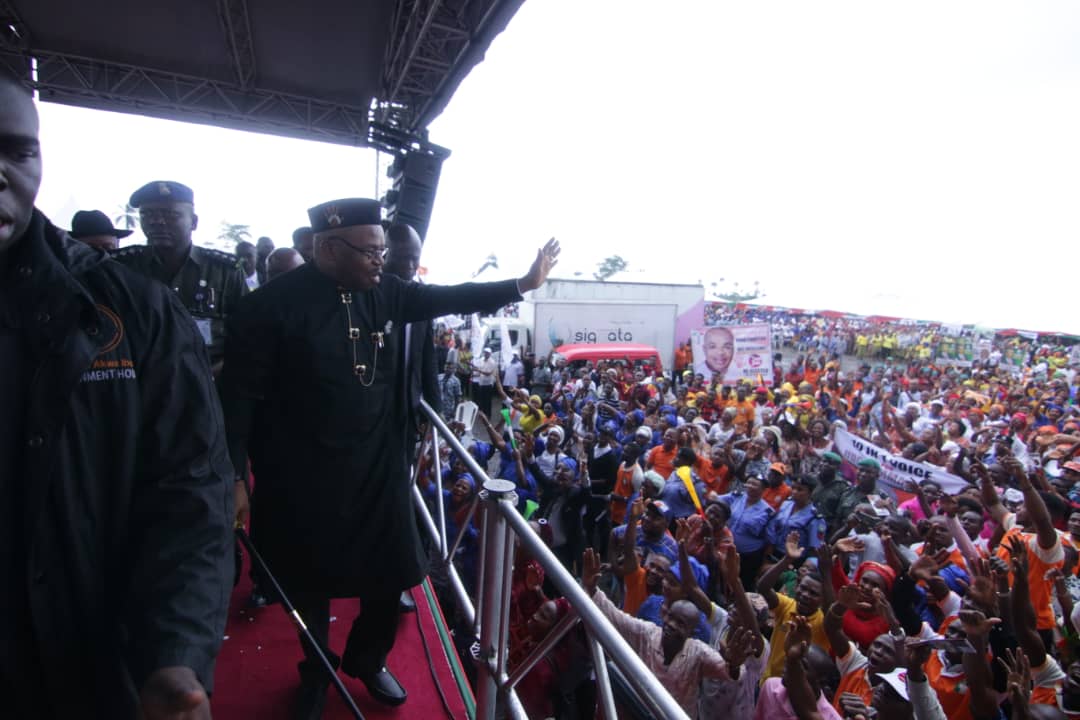 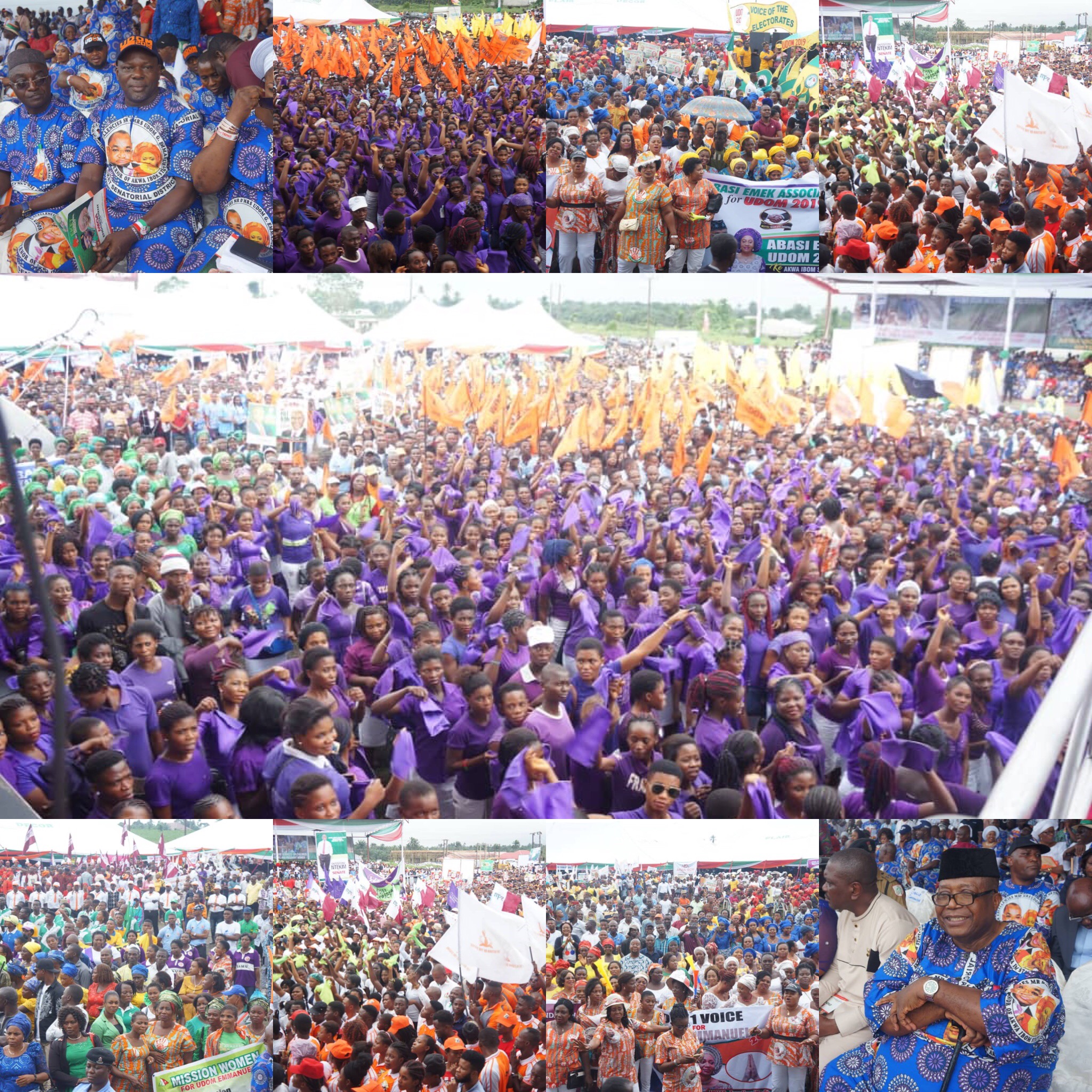 The state-wide heavy downpour of Monday could not deter the people of Eket Senatorial District of Akwa Ibom State from expressing their unalloyed and unwavering support for the state Governor, Mr Udom Emmanuel, in a mega endorsement rally.

Held at the Onna Township Stadium, the rally witnessed a large crowd of people across the 12 local government areas of the senatorial district to tell the Governor that they are solidly and fully behind him come rain come shine to return him to the Hilltop Mansion for second term come 2019.

Goodwill messages stressed the need for Eket Senatorial District and indeed all Akwa Ibomites to support Gov Emmanuel for a second term to consolidate on his remarkable and sterling achievements in just three years in office, which surpassed expectations.

Speaking, Senator Anietie Okon frowned at the statement by the immediate past governor of the state, Sen. Godswill Akpabio, that the emergence of Mr Udom Emmanuel as governor was a mistake. “Last night, I was disappointed to hear someone said that our Governor is a mistake. We all know who the mistake is, because we have always known the Annangs to be brave people, we wonder where this particular person came from, that he ran away from our fold out of fear. We all know God has never made a mistake in sending him to us, and our Governor is not and can never be a mistake.”

Also speaking at the event were former Minister of Lands, Housing and Urban Development, Chief Nduese Essien; Distinguished Senator Helen Esuene; Senator representing Uyo Federal Constituency. Sen. Obong Bassey Albert Akpan (OBA); and Member of the Federal House of Representatives, Hon. Francis Charles Uduyok; warning against rig the forthcoming general elections in 2019 against the wish of the people, saying that you can’t change a goalpost in the middle of a game.

On his part, Speaker of the State House of Assembly, Rt. Hon. (Barr.) Onofiok Luke, stressed that anybody who tries to stop Gov Emmanuel is working against Abak 5. Describing the Governor as a luxury yurt, he charged the people of Eket Senatorial District to rise up to defend what belongs to them and other senatorial districts will be on ground to back them up.

Gov Emmanuel, in his remarks, thanked the people of Eket Senatorial District for the show of love and confidence in him, saying that the overwhelming encouragements from all parts of the state has indeed boosted his determination, not just to declare but to do more for the unity of Akwa Ibom State.

The Governor stated that his administration has, within the last three years, touched areas that were never touched in the state, enumerating such areas to include Mbo, Ini and other interior parts of the state which have been visited with dualized roads, improved healthcare facilities, power infrastructure, International market and a modern sports facility in Eket.

Highpoint of occasion was the reception of former chieftains of the All Progressives Congress (APC) in the state including the Chairman of the party in the state, Dr Udoma Bob Ekarika, with his deputy, Eld. Emmanuel Udoh, and the 2015 Director General of the party’s campaign organization, Obongifiok Annie Asikpo, into the PDP family.

Dr Udoma Bob Ekarika said they were back to the PDP to celebrate Udom Emmanuel’s already concluded victory in 2019. “You cannot change the goal post in the middle of the game. Come rain come shine, Udom Emmanuel will be sworn in come May 29, 2019 because when the will of the people is galvanized for action, no stone or steel can stop it, be rest assured. I am coming from a very useless party and I will tell you more about them when we settle down.”

While addressing the Eket grand endorsement rally, one of the APC bigwigs, Asikpo described the APC as a party of bad people, saying that having identified some good people within the party, he decided to pull them all back to root to enable them contribute to the development of the state.

According to him, “APC is a party with majority of bad people, but I discovered that there are still very many good people in APC, so I decided to shake the party and bring every good person back to the PDP,” he said

Receiving the decampees, State Chairman of the People’s Democratic Party, Obong Paul Ekpo promised to ensure same rights and privileges to the returned members, and informed them that Gov Emmanuel has been adopted as sole candidate of the party.