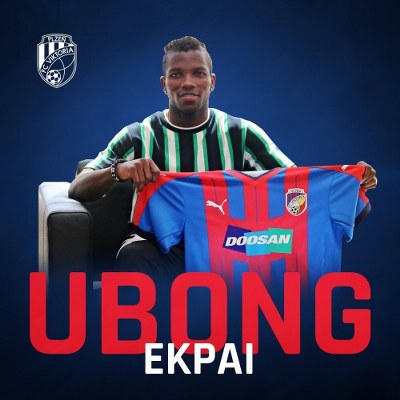 By Adeboye Amosu:
Nigerian midfielder, Ubong Ekpai, says he is delighted to link up with the best club in Czech Republic following his move to Viktoria Plzen, reports Completesportsnigeria.com.

Ekpai, 22, penned a three-year deal with Plzen on Monday ending his one year stay with another Czech Republic club, Fastav Zlin.

“I thank God for everything. I think Plzen is the best club in Czech Republic,” Ekpai, who once featured in the Nigeria Professional Football League for Akwa United and Kano Pillars told the club’s official website.

“It is like joining Real Madrid or Barcelona. For me, this is my Real Madrid.”

Meanwhile, the former Nigeria U-23 international thanks his former teammates and fans at his former club, Fastav Zlin, for their support during his time with the modest side.

“Thanks to all my teammates and the fans that supported me in fastavZlin. I will always remember you guys🙏🏼l love you🙏🏼,” Ekpai tweeted on his Twitter handle.

That offers Ekpai the chance to feature in the UEFA Champions League for the first time in his career next season.