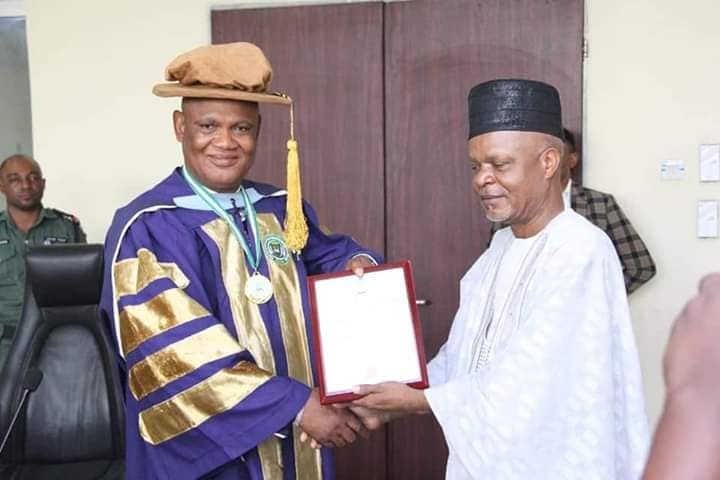 The developmental trajectory of the Governor of Akwa Ibom State, Mr. Udom Emmanuel, is being applauded and celebrated in far away Ghana.

This was made known earlier today when a renowned institution in the West African country, The Chartered Institute of Public Resources Management and Politics inducted and recognized the Akwa Ibom State Commissioner for Works, Akparawa Ephraim Inynageyen, with a Lifetime Fellowship Award in recognition of his ability to interpret the blueprint of the governor in driving development in the State.

The award was given in a special ceremony at the Conference Hall of the Akwa Ibom State Ministry of Works, Udoudoma Avenue, Uyo.

Dr. Kpoku Aquarte disclosed that, Inyangeyen was selected for the honour following two years of intensive research on his personality and service record.

He said the Institute looks out for highly resourceful and well meaning individuals in any part of the world who have written their names in Gold and greatly distinguished themselves in their respective areas of stewardship towards nation-building and development to honour and found Inyangeyen qualified.

Receiving the award with thanks, Akpawara Ephraim Inyangeyen, who disclosed that this is the first time he would come in contact with the Institute said he was surprised that an organization in far away Ghana could take the pains to study the blueprint of Governor Emmanuel’s development agenda and thus recognize his aide with a prestigious award.

Commissioner Inyangeyen stressed that, as far as his services as Commissioner for Works were concerned, nothing would have been achieved on his part without Governor Udom Emmanuel having given him the opportunity and supported him every step of the way for the record that is on ground.

He described the Award as an international endorsement of Governor Udom Emmanuel as the visionary and driver of the good governance enjoyed currently in Akwa Ibom State and also thanked Directors and Staff of the Ministry for their support, harping that, the Award is dedicated to them.

He however added that, the Award will inspire him to continue to do more for the state and the service of humanity.

The climax of the event was the adorning on the Commissioner in full regalia of the Institute, presentation of a Plaque of Excellence and a Gold Medal.

The Commissioner was flanked by the Permanent Secretary, Engr. John Itiat and senior Directors of Ministry of Works, while the official delegation of the Institute to Akwa Ibom State for the event led by , Dr. Richards Kpoku-Aquarte included an international columnist, Ambassador (Dr.) Tom Ohikere; and Head of Administration & Correspondence, Nigeria, Mr. Lanre Sadiq.