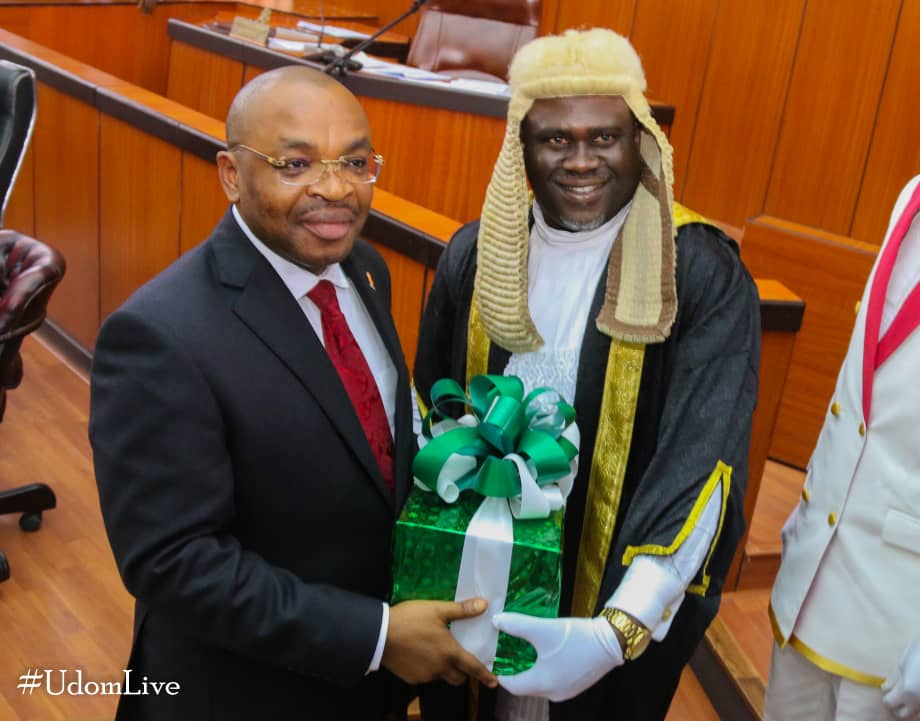 Governor Udom  Emmanuel has presented a budget proposal of N597, 800billion for the 2020 fiscal year to Akwa Ibom State House of Assembly.

A breakdown of the budget estimate as presented at the chambers of the state assembly in Uyo on Wednesday indicates that capital expenditure has N369, 642b,  recurrent expenditure is estimated to take N111,225b, while N116,933 has been estimated for consolidated revenue fund charges.

The 2020 budget which indicates a shortfall from the 2019 budget with its approved provision of N672,985, is according to the governor, predicated on an oil benchmark of $55 per barrel at a production rate of N2.18 million barrels per day, and with an estimated exchange rate of 305/USS, in line with the national budget benchmark projection.

Mr. Emmanuel said the 2020 budget christened “A budget of industrialization for poverty alleviation Phase II” has a  total projected revenue estimated of N381,556b as against the approved provision of N374,758b for 2019.

Emmanuel said the 2020 budget is further anchored on his  Eight-Point policy thrust which rests squarely on his  initial Five-Point Agenda  that shaped his First Term in office to wit; Job Creation, Poverty Alleviation, Wealth Creation,  Economic and Political Inclusion, and Infrastructural Consolidation and Expansion for continuous transformation of the State into an industrialized entity.”
“We are committed to complete all our ongoing projects and other star projects in our completion agenda”, he assured.
The Speaker, Akwa Ibom State House of Assembly, Mr. Aniekan Bassey applauded Governor Udom Emmanuel for the purposeful implementation of the 2019 budget and pledged to ensure a speedy consideration and passage of the 2020 appropriation budget.

He, however, charged the various Ministries, Departments, and Agencies (MDGs) to ensure they provide all the necessary supporting budget data and stick to the time table that will be announced by the house for their appearance.

On his part, the leader of the state Assembly Udo Kierian Akpan said the Governor has been able to bring about accountability in governance and promised that he and his colleagues will continue to support his efforts in service.