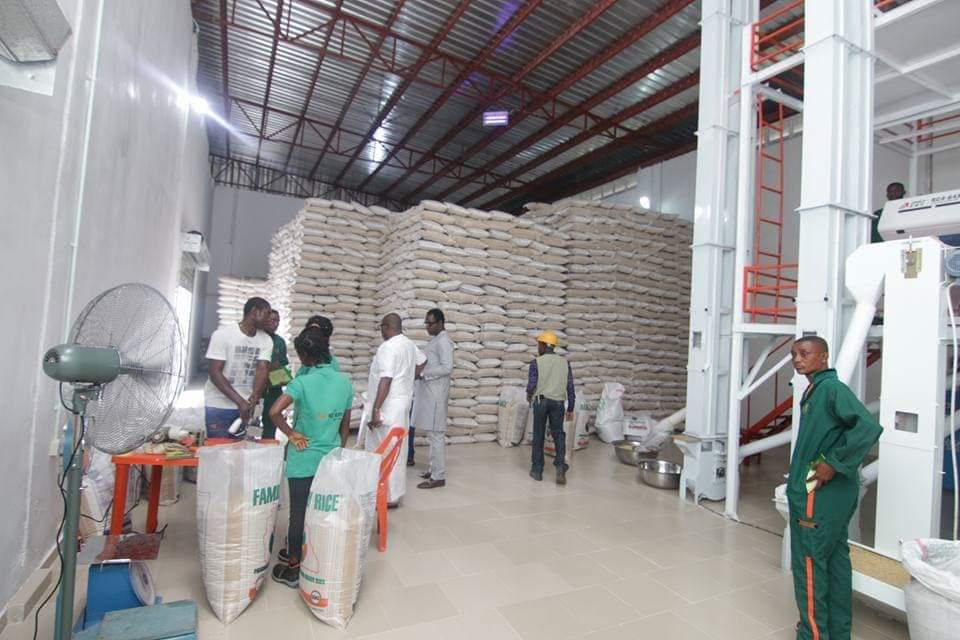 By Promise Etim
Friday 14th December, 2018, capped a new dimension for Agricultural revolution of Akwa Ibom State, as the Governor Udom Emmanuel, yet again demonstrated his willingness to push for a food sufficient Akwa Ibom, when he led thousands to the commissioning of a two metric tonnes per hour rice processing factory in Odoro Ikpe, Ini Local Government Area.
News of the commissioning was characterized with pomp and cheers, as the commissioner for Commerce and Industry, Barr. Ukpong Akpabio, disclosed to the media, that the rice mill was the 16th Industry facilitated by the Udom Emmanuel administration, since it took power in 2015.

Agonizingly, days after, what seemed an economically viable project, was almost turned to a political tool, as many dissenting opinions coined a narrative that products found in the factory were imported from elsewhere and portrayed as if they emanated from the factory. This was the same narrative that literally characterized the existence of other working Industries earlier established, some of which I have personally visited.
As a Food Process  Engineer and one with some knowledge of Agricultural Products and Processing and Storage Engineering, having majored in the field all through my career, it felt indebted to the masses, by embarking on a fact finding mission to establish the true position of things, as regards the newly inaugurated factory.

First, I would love to draw attention to the fact that rice is initially harvested is referred to as rice paddy, and come with huge level of chaff. Practically, if the processing center is a distant from the harvest point, they are usually transported to the processing site, where the paddy and chaff are initially selected and graded.

Worried by different assertions turned in by several individuals online and offline, as regards what an Adamawa bagged rice paddy was doing in the newly commissioned factory, I decided to embark on a thorough investigation to ascertain whether or not the plan was to be serviced by rice grown locally from the state or not. Preliminary investigations revealed that for a round to round operation of the mill, the quantity of rice grown in the state may not be enough to service the mill.

This further moved me, to consider talking to some rice farmers in the state, and in the process got a reliable, reputable and valuable lead from a farm-assist, Ime Usoro, who offered direct answers to the very many begging questions and speculations that made the ranks in the past two days.
Ime, who is the CEO of Integrated Agro Consult Services, has been an active rice farmer for more than a decade, and a graduate of the University of Uyo. His exploits in the Agricultural Sector, particularly in the area of supply of input to farmers in States across the Federation, earned him some reputation within and outside the State, particularly in the North region of the country.
The Agroprenuer was employed by FADAMA III AF in Akwa Ibom State, as the service provider for farmers during the cassava intervention project facilitated by Governor Udom Emmanuel in 2016, to increase production capacity of farmers. The relationship between Ime and FADAMA III grew stronger and better off, but Ime had to return to Adamawa State to continue his dry season paddy production.
Fast forward to 2018, the coordinator of FADAMA III in the State, Dr. Ephraim Okon, through the Ministry of Agriculture and Food Sufficiency had contacted Ime, to help them make inquiries about rice paddy production, as well as milling machines, which he responded and accorded them the necessary information required at that time.
In November, the FADAMA programme coordinator, asked Ime to help them send some samples of rice paddy, so to enable them test run the mill efficiently, as well as supply them with foundational seeds that would be used mainly for planting purposes, which he obliged and offered to help.
For the purpose of clarity, rice milling machines are primarily used for: cleaning; sorting; dehulling (dehusking); polishing; grading; mixing; weighing; bagging etc, before rice can used for domestic or commercial purposes.
It was necessary for the mill to be tested at full capacity, before its commissioning, to examine if the theoretical efficiency of the mill, when compared to actual efficiency in the field gave some significant difference, hence the need for rice paddy of good quality to be brought in for the process. It is also worthy of mention, that quality of the rice paddy to be brought in much be excellent in terms of its characteristics and its engineering properties.
These and more guided Ime on the variety of paddy he should get across for test running of the mill. Of the four varieties at his disposal (Faro 38, Faro 39, Faro 44 and Faro 45 – IITA 257), Faro 44 appeared the most favourable for the condition, given its high resistance, unique taste and early maturity (usually within 90 days). Some samples of paddy were sent to the mill by Ime, from Adamawa State (Harvest Location) for the sole purpose of test running the mill.

Of the truth, the paddies used were not obtained from any farm in Ini or elsewhere in the State, as speculated by many. Interestingly, samples of the improved Faro 44, used for test running of the mill, have been widely distributed to farmers across the state, with focus on increasing capacity and encouraging more local production of rice.
Referencing the 120,000 metric tonnes per year rice processing factory in Kebbi State, established through a PPP initiative in 2017, the number of rice farmers have increased by more than 40%, with a target of doubling that figure in 2020 and correspondingly increase the production capacity to a projected 500,000. Similarly feat, though on a low scale will be achieved in the State through the mill.

Genuine efforts of the Udom Emmanuel administration in such magnitude, should be encouraged and not undermined in the name of politics, as the Ibom Agricon Rice Mill will create Jobs for teeming Akwa Ibom Youths and also increase the production capacity of rice farmers in the State.
Etim is a Lecturer in the Department of Agricultural Engineering, Akwa Ubom State University and a Bio Process Engineer.