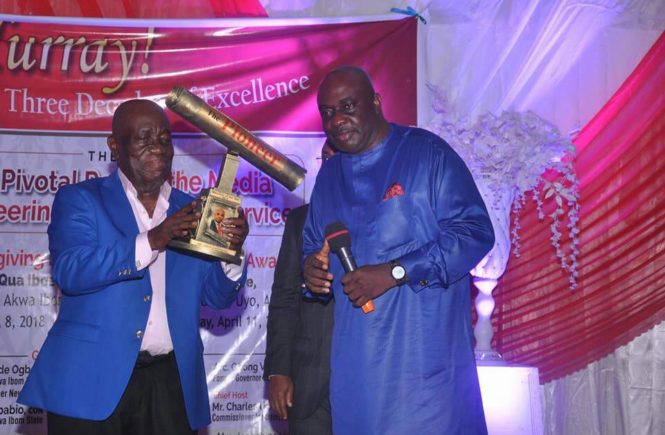 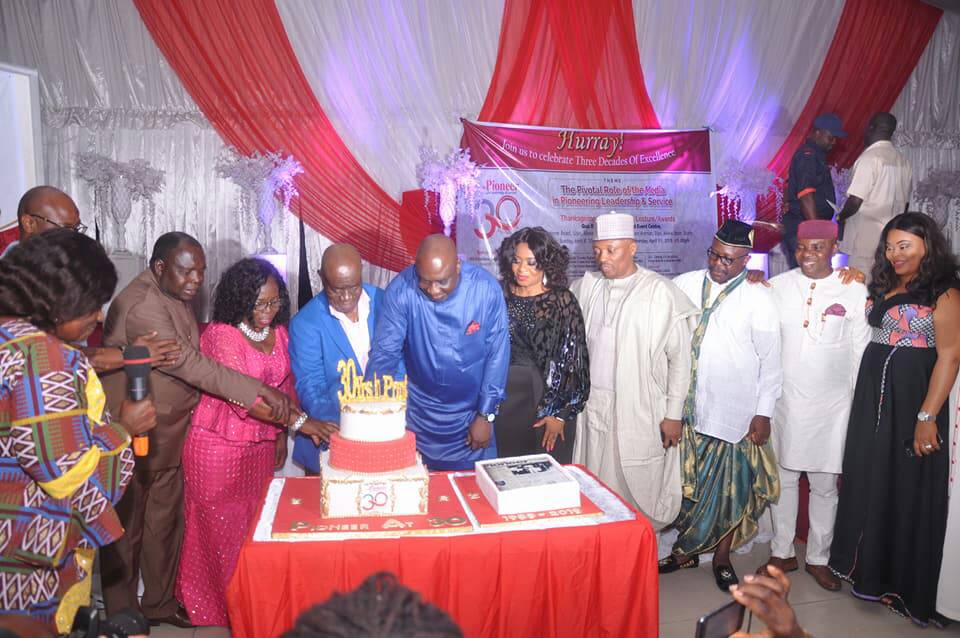 The celebration which started with a thanksgiving service at the Qua Iboe Church, 112 Ikot Ekpene Road, Uyo, the Akwa Ibom capital, Sunday, April 8, 2018 climaxed with a lecture/award night, Wednesday, April 11, 2018, the exact day and month the newspaper hit the news stand in 1988.

Gov Udom Emmanuel at the event congratulated The Pioneer on the feat, noting that the medium since inception has been telling the Akwa Ibom story and has also helped in defining and redefining the Akwa Ibom character and identity, struggles and achievements.

He saluted  the management (led by Mr Umoette Umoette) for not deviating from  the mission of the newspaper and expressed delight  that  The Pioneer was not only still standing strong,  but thriving due to the  courage and  dedication to duty by the past and present management as well as staff  of the establishment .

Represented by his deputy, Mr Moses Ekpo, the governor  called on the media community to partner the state government on its development strides.

He warned against criticisms that were based on malice and with the intent to destroy.

“Let us disagree on  policies without  adopting the kitchen  sink approach, let us build our state irrespective of our political leanings, let us celebrate  our common  values and where there is need  to disagree, let us do with love and mutual respect”, he stated .

The commissioner for information and strategy, Mr Charles Udoh observed that The Pioneer has been playing pivotal roles in information dissemination, maintaining that it has contributed greatly to the growth and development of both the state and the country.

The information boss lauded the progenitor of the Newspaper, Mr Moses Ekpo, the current Deputy Governor of Akwa Ibom State,who was the Commissioner of information during the military administration of Col. Tunde Ogbeha in Akwa Ibom State which established the Newspaper, adding that it was pleasing for him to share in the euphoria today while on the saddle as the number two citizen of the state.

The member for Onna State Constituency in the State House of Assembly, Mr Nse  Essien, noted that  The Pioneer,  which was established  on the basis of leadership and service, has not deviated from the vision of its founding fathers and called on other media establishments to emulate the  newspaper  for responsible press as against yellow journalism.

The chairman on the occasion, Professor  Enefiok Essien, said at 30 the medium has done great things and congratulated the staff for their hardwork and dedication to service

Essien, who is the vice-chancellor of the University of Uyo (UNIUYO), commended the past state military administrators and governors for their foresight and for sustaining the newspaper to live beyond its name.

He described the tabloid as a credible news medium which has enjoyed good circulation within the state and beyond.

In a  public lecture titled;The  Role of the Media in Pioneering Leadership and Service, the rector of Catholic Institute of  West Africa, Port Harcourt, Prof. Sylvanus  Udoidem, noted that with three decades of  existence, The  Pioneer as a government medium  has justified  the message in its motto: For leadership and Service.

Udoidem reasoned that leadership and service bring changes in the society, and if the media does not change the mindset of the society positively, then they do not fulfill their obligation.

The don  commended  Governor  Udom Emmanuel for bringing the spirit of  re-awakening through  dakkada in the state .

The general manager/editor in-chief, Mr Umoette Umoette, said since inception the newspaper in discharging its primary function of information dissemination, education and entertainment has been providing constructive guidance to the public on matters of public interest, presentation of problems, aspirations and achievements of the government and the people as well as guiding against unlawful invasion of liberties and rights of the indigenes and beyond.

Umoette, who is also the senior  special assistant to the governor on media, remarked that  with the strong  commitment of the present administration to  strategically transform  and re-position  AKNC to an enviable height, the newspaper was poised to deliver on its prime responsibility of  conveying  information  and knowledge to the public domain in a timely,  strategically  and  politically correct  manner.

He appreciated the governor for taking special interest in The Pioneer and his deputy   for laying a solid foundation for sustainable growth, and pledged to repay the trust and confidence reposed in the management by maintaining the high standards that have kept the newspaper afloat for the past 30 years. 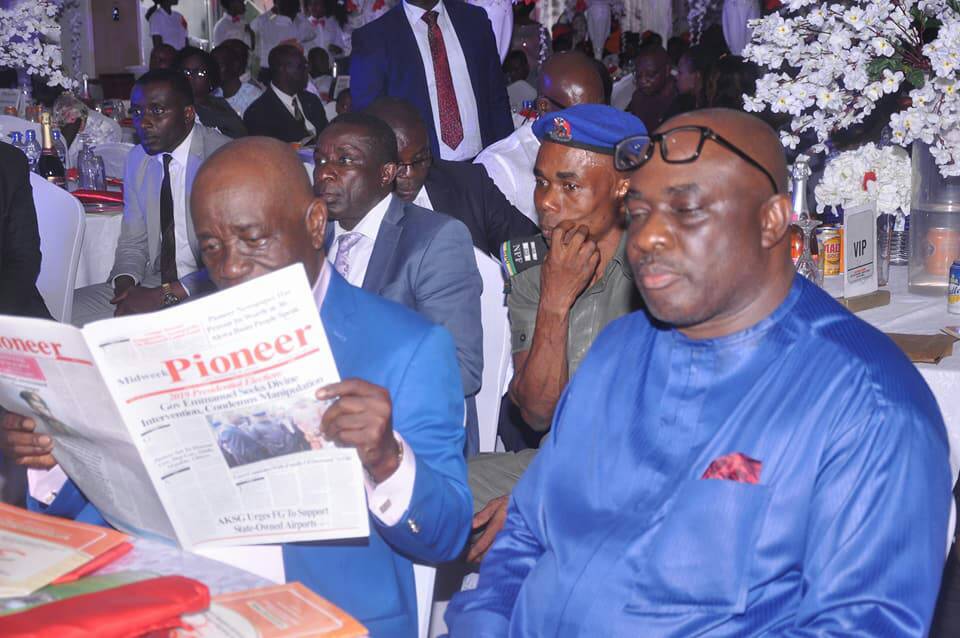 The AKNC boss acknowledged the reading public for patronage, the multinationals, non –governmental and governmental institutions as well as corporate organizations for their tremendous support to keep alive the establishment.

Also bestowed with awards were; Mr Nsikak Johnny of Nsik Motors, Samuel/Isabella Foundation, Prince Anniekan Etuk of the Oliver Tweests and the Aka community, landlord of the newspaper house.

Pix 1: The Akwa Ibom Deputy Governor, Mr Moses Ekpo reading the April 11, 2018 edition of The Pioneer newspaper at the grandfinale of the 30th anniversary of the paper in Uyo, recently while the general manager/editor-in-chief, Mr Umoette Umoette (left)  looks on.

Pix 2 : The Akwa Ibom governor, Mr Udom Emmanuel, represented by his deputy, Mr Moses Ekpo receiving the Governor of the Year /Man of the Year 2017 Award presented to him by the general manager/editor-in-chief of the Akwa Ibom Newspaper Corporation, (AKNC), Mr Umoette Umoette at the grandfinale of The Pioneer @ 30 celebration  in Uyo, recently.