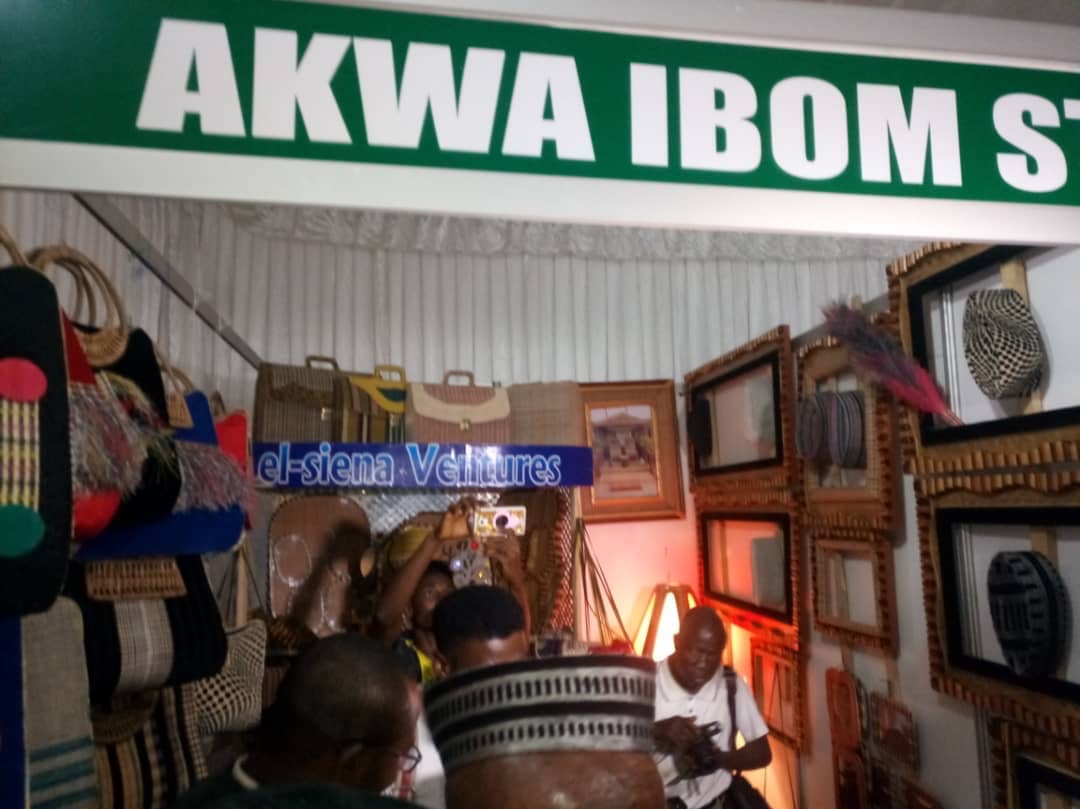 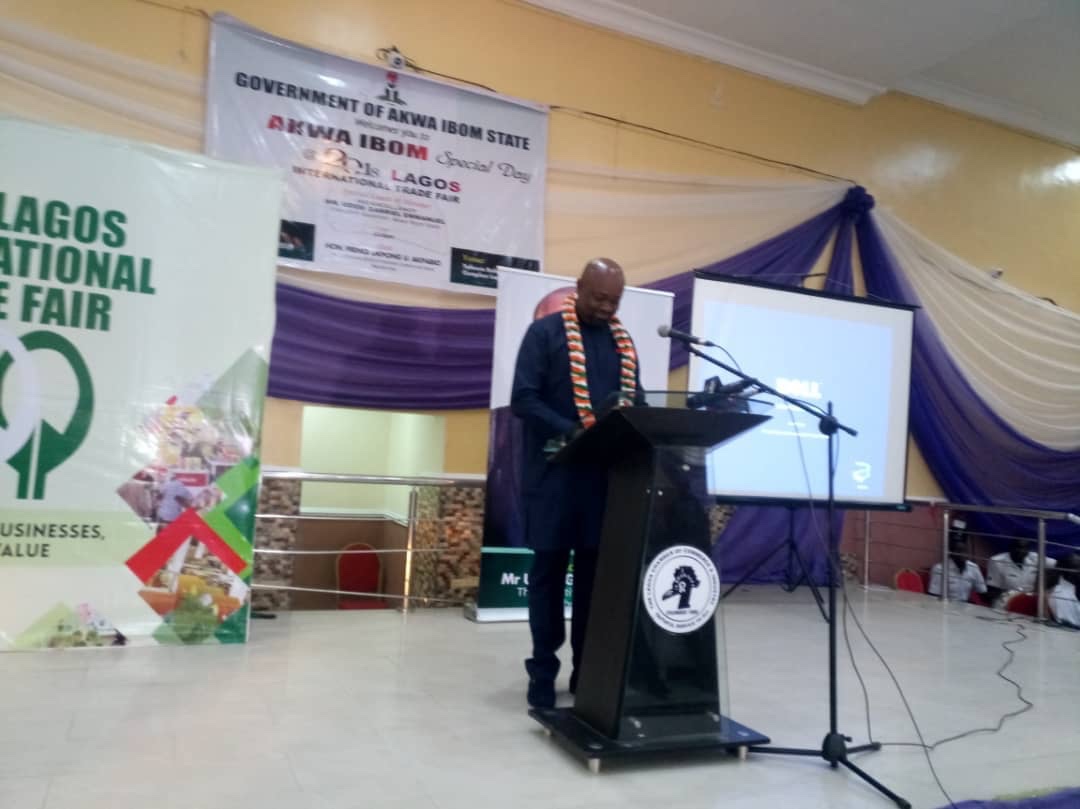 Akwa Ibom State Governor, Mr. Udom Emmanuel says his administration is irrevocably committed towards the industrialization of the state. He stated this on Thursday in Lagos, while declaring open the Akwa Ibom State Special Day at the ongoing Lagos International Trade Fair, holding at the Tafawa Balewa Square in the nations commercial capital.

Represented by the Honorable Commissioner for Investment, Commerce and Industry, Prince Ukpong Akpabio, the Governor listed the achievements of his government in the area of industrialisation in the past three and a half years in partnership with the private sector to include, the first ever Syringe Manufacturing Company in West Africa (Jubilee Syringe Factory) with capacity to produce 400 million syringes in a year, and as well as create employment opportunities for thousands of Nigerians through direct and indirect jobs, the Meter Solutions Factory, AKEES Cottage Industries, Fertilizer Blending Plants, reactivated Peacock Paints, as well as numerous ongoing industrial concerns, and called on potential investors to key into the industrialization drive of his administration by taking advantage of the wealth of opportunities that abound in the state.

“Our commitment to Industrialization is irrevocable. The Ibaka Deep Seaport will be one of the most veritable platform to rewrite the Akwa Ibom state story in wealth creation and employment generation. The St Gabriel coconut plantation/Refinery is on course. The Electric Meter Assembly plant, fertilizer Blending plant and peacock paint industry are in full operation. Several other world class industries will soon be established in our state through the PPP arrangement to develop our socio-economic life”

The Governor who was conducted round the various exhibition stand where various products produced in Akwa Ibom were on display, hailed the entrepreneurs for contributing to the economic wellbeing of the state, and assured of his administration’s continuous support to the private sector to boost industrial growth in the state.

He commended the Lagos Chamber of Commerce, Industry, Mines and Agriculture for organizing the Lagos International Trade Fair which he noted has offered Akwa Ibom entrepreneurs the opportunity to showcase and market made in Akwa Ibom products to the international market.

“I am proud to identify with our entrepreneurs who are part of this fair. They have responded to the Clarion call of Government to DAKKADA, (“Arise to Greatness”). I appreciate your commitment to contribute to the economic wellbeing of our dear state”.

“I wish to commend the Lagos chamber of commerce, industry, mines and Agriculture for their thoughtfulness and expertise in organizing this fair which has offered our entrepreneurs the opportunity to showcase, and market made in Akwa Ibom state products to the international market”.

“Recent global economic challenges as a result of the weak value of the Naira in the global economic market has raised many critical issues and economic questions. The Government of Akwa state having fully understood the dynamics of economics, has painstakingly annexed her lean resources towards creating an industrial hub in the state which will stimulate industrial development of the state thereby creating jobs and wealth for her people”.

“The Government has created an enabling environment for business sustainability, and vigorously pursued public private partnership (PPP) initiatives with renowned international organizations to develop the industrial sector if the state”.

“The Government in partnership with VKS Nig. Ltd, has established the first ever syringe Manufacturing company in west Africa with the capacity to employ over 20,000 direct and indirect staff. The Ibaka Deep Seaport is an audacious attempt to rewrite the story of Akwa Ibom state and Nigeria in the maritime sector. It holds the promise of an industrial revolution for our state as it would also create a self sustaining commercial city with oil and gas support services. It is a project too dear to us. We are fully committed to putting every energy required to see to its actualization in no distant future”.

“Once again, I salute the Lagos state chamber of commerce, industry, mines and Agriculture for putting up this world class event. I salute all the exhibitors for participating in this fair and particularly the ministry of investment, commerce and industry for an excellence outing”.

” I pledge the continuous support of Government to help develop genuine entrepreneurs and manufacturers. We will continually partner with you to develop and sustain industrial development of our state”.

“I hereby put a call to potential investors to make Akwa Ibom state their investment destination by taking advantage of the wealth of opportunities available in the state”.

“I wish to formally declare the Akwa Ibom state special Day at the Lagos international Trade fair open. As you go ahead with this Trade fair, I urge you to make this event worthwhile”.

In his address, the Commissioner for Investment, Commerce and Industry, Prince Ukpong Akpabio whose message was message was read by Permanent Secretary in the Ministry, Mr. Oliver Udoukpo, said the administration of Governor Udom Emmanuel since inception till date has been embarking on a holistic industrialization of the state, which has yielded fruits.

He commended organizers of the trade fair for putting up an excellently packaged fair which meets global best practices and standards.

Prince Akpabio expressed hope that the trade fair would offer Akwa Ibom entrepreneurs the opportunity to interact and share ideas with members of the international community participating in the trade fair.

Ruwase explained that the chamber believes the role of government is to create enabling environment for the private sector to thrive, and praised Governor Udom Emanuel for the feat he has achieved in Akwa Ibom state in the area of industrialization.

The trade fair which began on Friday 2nd November, 2018 will be brought to a close on Sunday 11th November.

Others include, Directors and some staff in the ministry, members of Uyo Chamber of Commerce, Mines and Industry, members of the business community within and outside Nigeria, Akwa Ibom Indigenes resident in Lagos among others. 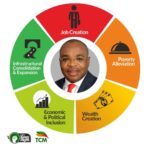