Press statement: Hold AIG Musa Kimo responsible for any violence in Akwa Ibom during the elections

Gentlemen of the Press,
We are constrained by emerging disturbing circumstances to invite you for this briefing. We know as usual that you will discharge your duties of informing the citizenry of these very disturbing occurrences which if left unchecked may grossly affect the credibility of the elections.

It is common knowledge that security can make or mar any process, elections inclusive. In fact, security can define the exact color of an election. Away from the electoral umpire, the next most critical state actor is those in charge of security. They determine voter apathy and level of participation, aid in voter confidence during collation and ultimately confer credibility on the final result. Their role is therefor every critical and in civilized climes, such people Manning such critical positions should be manifestly seen to be neutral and non-partisan.

In Akwa Ibom state, reverse is the case, as some security chiefs are clearly partisan, remaining only to have their name in the party’s register. They do not hide their partisanship, in fact they wear it as a replacement for their official beret. Worthy of specific mention are AIG Musa Kimo, CSP Brown and SP Idorenyin Akpabio who have displayed unbridled partisanship with the APC in Akwa Ibom state. Two days ago, intelligence reaching us is that policemen of varying ranks were invited to Georgetown hotel beside Tropicana Event Centre and told by the AIG to show sympathy to the government in power at the center. We learnt that the were threatened with delayed promotion and punitive postings if they failed to cooperate, while the pliant officers and men are to be favoured in preferential postings and accelerated promotion.

It will be recalled that under the commissionership of Kimo, he posted out officers who were professional in their duty in preference for officers who had sympathy for the APC. He deployed Godswill Akpabio’s cousin, Idorenyin Akpabio to man the Anti-Robbery Squad of the police Command and shielded CSP Brown from transfer and queries.
His decision to permanently and immovably relocate to Akwa Ibom state for the election is most worrisome and can only be a pointer to his avowed commitment to use his offices to curry illegal favours for the APC.

To this end, having reviewed the situation, the party is hereby alerting foreign and local observers, the Police service commission, INEC and the entire global community to the ignoble roles that the trio of Kimo, Brown and Akpabio have assigned to themselves in the forthcoming elections. They are acting in concert with Senator Godswill Akpabio who now has the details of police deployment, not available to other candidates, even the Chief Security officer of the state. This clearly shows the unholy romance between the AIG and the Warsaw General and uncommon defector cum national Comedian, who’s election is due on Saturday. The police is also planning to arrest APC hired thugs, who will implicate PDP bigwigs, by naming them as their sponsors, in a bid to have legitimate reasons for the wanton arrest and incarceration of our party’s chieftains.
Despite the huge awareness of the civil population aware of their devious schemes, they are hell bent in manifesting their plans irrespective of the opposition to it. This will therefore the catalyst for crisis. We want everyone to hold the trio responsible if there is any crisis or violence before, during or after the elections( especially the Governorship elections ) in Akwa Ibom state.

We also appeal to foreign observers to attach at least 2 personnel each to these characters who must listen to their calls, monitor their conduct and generally accompany them at all material times to this elections. This looks like the only means of preventing the manifestation of their evil plans.

As a party, we are deeply committed to participating in a free, fair, credible and most importantly, peaceful elections that must reflect the wishes of the people. AIG Kimo must not be allowed to cause a rat race in our state, like Ras Kimono sang in his reggae album. The peaceful blues in our state must not be disturbed by the Kimo’s reggae.

We call on Akwa Ibom people to remain vigilant and gallant in the face of these banal schemes, to ensure that our votes are protected, as they must count.

Thank you for your time.

Previous More Reasons To Keep Right Till 2023… PHOTOS
Next Why We Postponed Nigeria’s Election to Feb. 23rd – INEC 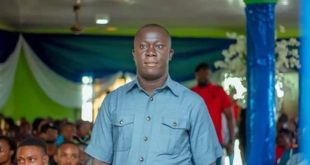