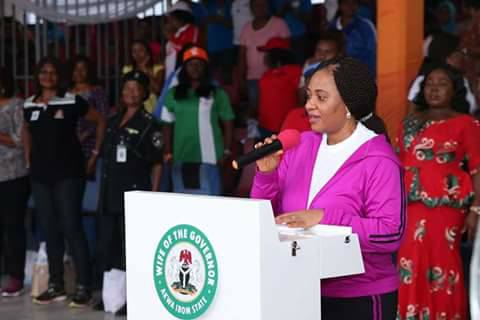 The First Lady of Akwa Ibom state and founder of Family Empowerment and Youth Reorientation Path initiative (FEYReP), has cautioned male students of secondary schools across the state against destroying themselves by involving in cultism, drug abuse, sexual promiscuity, and rape.

She said the future of the family and the state would be bleak unless concerted efforts are made on social evils in the society to save the boy-child.

Mrs. Emmanuel gave the warning Thursday, during the inauguration of the Boy-child project of her pet-project tagged: “BRIGHT FUTURE FOR RESPONSIBLE BOYS” which held at Ibom Hall, Uyo.

In her words, “the family unit is the greatest gift from God to humanity, hence, neglecting the needs of the boy and girl child will be failing the society and God.”

Mrs. Emmanuel further stated that her desire to look into issues relating the boy-child was “borne out of the need to protect the boy-child from the harmful forces of the society.”

She noted that it was pertinent to balance the efforts of her pet project regarding the welfare of the girl-child, by sanitizing and bringing the boy-child to a place of ample awareness and confidence to excel to greater heights.

“Having taken time to educate the girl-child in recent times, I thought it would be wise to follow suit for the boys in order to achieve the desired results.” Said, Emmanuel.

While acknowledging that the joy of every parent is to see his/her child live responsibly and grow into a successful adult, the FEYReP boss assured that she will continue to use her voice to engage in conversations that would better the lots of families in the state.

Seasoned resource persons such as the State Commander of National Drugs Law Enforcement Agency (NDLEA), Mr. Mohammed Sokoto, Pastor Ezekiel Attang of God’s House of Refuge Church, Uyo, Pastor Runcy Mike of the Evening Church, among others were on hand to take the students through special topics like “Consequences of Drugs/ Substances Abuse and Addiction”, “Cultism: Deception / Enticement and Gender Identity” and “Sexual Orientation”.

There were also goodwill messages from political office holders and youth stakeholders, who expressed appreciation to the governor’s wife for the first of its kind project, saying the initiative is timely and apt and as well as pledged their support to further the advocacy.