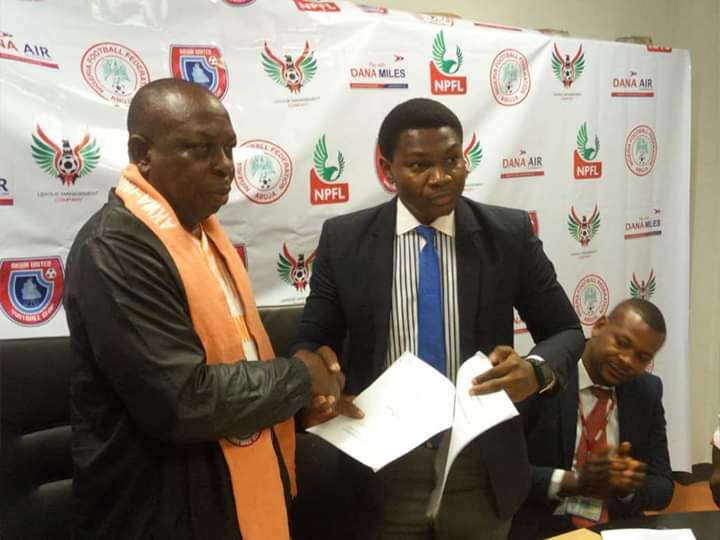 Nigerian Professional Football League side, Akwa United FC and Airline Operator, Dana, have extended their partnership for a year.

Signing the agreement at the Godswill Akpabio Stadium in Uyo, Wednesday, representative of the Airline, Kingsley Ezenwa, said the company decided to renew the deal based on the club’s antecedent.

“We are here again to renew what we started last year. We believe in Akwa United. Akwa United did well last year. They were in pole position for the league. We believe in the State. It is our commitment to contribute to sports development and the state. We will continue to partner with the team in anyway we can, we are back here to support the team”, Ezenwa added.

On his part, Chairman of Akwa United FC, Elder Paul Bassey, said he was delighted with the new deal, and lauded Dana Air for finding the club worthy to partner.

“I was excited, when they (Dana) called that we should renew the contract. For anyone to invest in you, he must be convinced that you are worth investing on. The NPFL is difficult, you have to travel to Yobe, Maiduguri, etc. We have carried the Dana to Kano and Maiduguri, waiting for them to arrive”.

“It is always a rewarding experience flying Dana Air last season. We (Akwa) thank Dana for the gesture and assure them that we are going into this season with so much optimism. Dana Air will sure be one of those enterprise we will celebrate the trophy with this year. I believe that they will get value for this deal”, he said.

Dana, was the official airline of the Uyo based club in the 2017/2018 season. The Promise keepers reached the quarter finals of the Aiteo Cup and were second on the log before the campaign ended on matchday 24, due to the crisis that rocked football administration in the country.