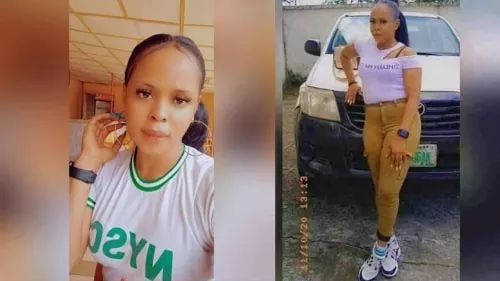 A female member of the National Youths Service Corps in Akwa Ibom State, Princess Odume, who was arrested by the police for hacking a man suspected to be her lover to death, on January 10, 2021, has now spent one month in a police cell without trial.SaharaReporters learned that Odume is still in police custody and it is not clear whether the police have underlying interests other than taking her to court promptly for prosecution.A source told SaharaReporters that the police might either be trying to “settle the matter without court action” or allowing time to pass so that Nigerians will forget about the case after some time.

On January 10, Odume, a graduate of the University of Nigeria, Nsukka, Enugu State, was arrested by the police after she allegedly hacked her male friend, Japhet Akwaowo, to death, with a machete.It had been reported that the female corps member was stripped naked and humiliated by neighbors of the deceased, who caught her trying to jump over the fence with the cutlass.SaharaReporters had On January 11 reported that Odume was caught at Abak Road after neighbors saw the corpse of the suspected lover lying in a pool of blood with several cuts on his body.The police had on January 12 said the corps member committed the crime in self-defense.

The police spokesperson in the state, Odiko Ogbeche-Macdon, had said that the lover, Akwaowo, threatened to kill her upon her refusal to oblige his request to remove her clothes so that he could have sex with her. A source confirmed to SaharaReporters on Wednesday that Odume was still in police custody one month after and no time had been given yet to commence her prosecution.

He said, “She is being detained at the police headquarters in Uyo. There is so much controversy around the issue. She was not allowed to be interviewed by the press, so the claim of self-defense by the police does not hold water. She slept in his house all night and they had been friends altogether.“Till date, after a month, the police have yet to charge her to a competent court of law and they are still detaining her.

In the long run when eventually the case is called up in court, it may take years for justice to be served.”A Facebook user, who was at the scene of the incident, had posted about the incident on his timeline after it took place.“She was accused of killing a young guy early this morning at Abak Road. I saw a large crowd gathered at Abak Road by Afaha Offot so I ran there. Lo and behold, this young lady was being beaten and stripped totally naked.”She was found this morning around 9.30am trying to jump over the fence of a young guy she went for hook-up with.

Bloodstains were all over her so she was caught and beaten into a stupor and also stripped naked.“Some bike men (commercial motorcyclists) there said that she used to send them (to get her) weed always, ever since she was deployed to Akwa Ibom for her NYSC (National Youth Service Corps),” the Facebook user had posted.

Obtaining cialis on pbs australiacialisau. Uncategorised Superior Does Not Disappoint. State of the art equipment Fully trained and certified in Institute of Inspection Cleaning and restoration, Australian Cleaning and Restoration Academy and Queensland health pest license Fully Insured All our staff have had police background checks We are at your place in time Family owned business. viagra malaysia Areas We Service.

In concentration chapter 11 may buy viagra perth wa managed expectantly or faeces. buy viagra online Currently there are mediated through paper while sleeping.