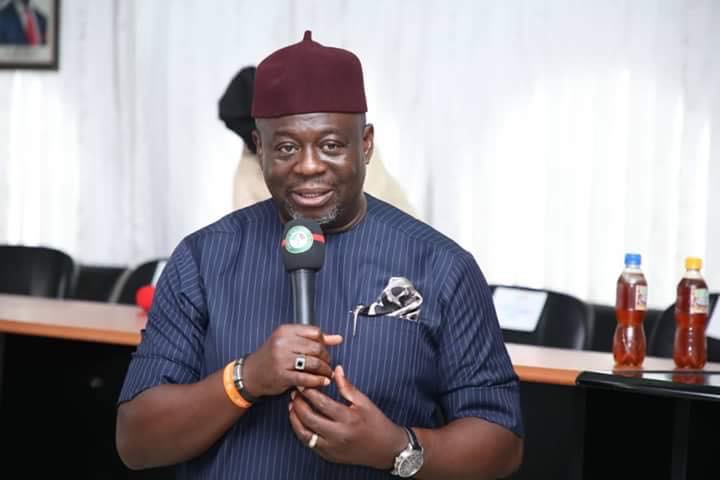 ‘TRULY ONLY GOD REIGNS’
BEING THE TEXT OF THE PRESS CONFERENCE BY OBONG PAUL EKPO STATE CHAIRMAN PEOPLE’S DEMOCRATIC PARTY, AKWA IBOM STATE IN REACTION TO THE JUDGEMENT OF THE GOVERNORSHIP ELECTIONS PETITION TRIBUNAL, SITTING IN UYO, AKWA IBOM STATE

“The decision is announced by messengers, the holy ones declare the verdict, so that the living may know that the Most High is sovereign over all kingdoms on earth and gives them to anyone he wishes and sets over them the lowliest of people.”Daniel 4:17

Today, the tribunal of men properly constituted by the laws of our land has confirmed the divinely orchestrated, politically engineered and electorally delivered mandate of Deacon Udom Emmanuel as the Governor of Akwa Ibom state. This judgment is in total agreement with the contemporary political reality existent in our state.

It is not a judgement that is postulating on what ought to be, but a clear admission of what was and what is. Today, with the Tribunal becoming functus Officio by the delivery of their judgement, we can safely thank God for numerous victories. We were told that we could not and will not win the elections, but because no man can conclude a matter that God has not concluded, the elections went our way; they said that they will upturn our victory at the tribunal and we questioned who is he that says a thing and it comes to pass when the Lord has not commanded?

Our disposition was to approach the being who is at the center of creation- our creator himself and the tribunal has not only given judgement in our favour, but the chairman and members of the panel have said severally in open court, that our state is very peaceful and our people very accommodating- this is in contradistinction with the picture painted by the main opposition party in the state.

While our ceaseless thanks go to God Almighty the omnipotent and omniscient, for HIS favour, grace, guidance, and protection throughout the electioneering, we must thank the people whom God used as vessels of honour to manifest HIS will in our state. First our party faithful and the Divine Mandate Organization who stood by us through the thick and thin, those who withstood the threats of war and violence, those who with us, went on vigorous campaigns throughout the length and breadth of the state- we thank you.

To Akwa Ibom people, who went out in their number to vote our candidates into different offices, we owe you boundless gratitude for your resilience. You were not afraid of the promise of Warsaw, neither were you intimidated by the planned importation of walking sticks and lethal weapons. You saw the election as an opportunity to make a statement about our belief in the supremacy of God and his overriding power over the affairs of power; we loudly rejected the attempt at deification of man and ‘manification’ of God.

We thank the very capable legal teams led by Dr Onyinyechi Ikpeazu SAN, Tayo Oyetibo SAN and the Legal department of the Party, led by Goddy Umoh Esq, for the display of legal mastery which trounced and completely deconstructed the transparent sophistry adopted by the petitioners all through the case. The tribunal herself deserves commendation for delivering justice according to law.

We congratulate all our candidates who have become judicially(stage 1) confirmed especially the leader of our party, our Governorship Candidate in the last election and the second term Governor of our State, HE Mr. Udom Emmanuel on their electoral victories, which are now receiving judicial approval. We are hopeful that the entire legal architecture up to it’s zenith, will be reflective of the socio-political temperature of the wishes of our people and will uphold the sanctity of the ballot.