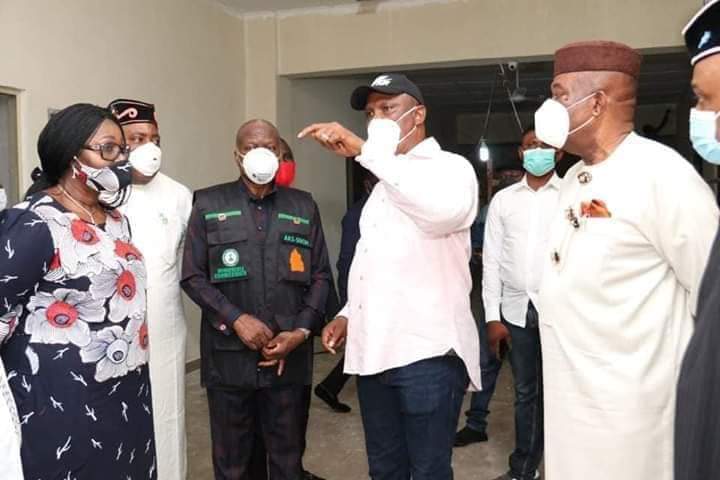 The date was October, 23, 2011. Football lovers and particularly, fans of the English Premier League were treated to a feast of the spectacular.
The usually hotly contested derby between the two Manchester based rival clubs turned to a One man Spectacle.

Mario Ballotelli was that man. He popped up and stunned the ecstatic Old Trafford home crowd into silence when he set Manchester City on the path to a a 6-1 thrashing of Manchester United. This turned out to be one of the most impressionable derby of all times between both clubs.

What made that very evening, that United were humiliated with their worst home defeat since February 1955 special, was, Ballotelli’s curious celebration that left tongues wagging for years to come. He raised his jersey up and revealed an inner wear with the caption, “Why always me?”.

To crown it all, that sweet victory shot City five points clear at the top of the Premier League ladder.

Asked why he celebrated that way, Mario, as he is fondly called, revealed, he had become the butt of all talk shows, commentaries and analysis by the English press for a long period. Some abused him, some questioned his talent, some were cynical about his capabilities or being worth his price tag. Others made jokes of him. Many more however lauded his incredible potentialities.

I made this allusion because I really wanted to talk about the Honourable Commissioner for Works, Akwa Ibom State, Mr Ephraim Inyangeyen. Like Mario, he is the most talked about appointee of His Excellency, Governor Udom Emmanuel. Indeed, only his boss has surpassed him in mentions in the Press, electronic, Print, and online platforms. They always do. That’s what I want to resolve.

This summation was well manifest in a piece written by my favourite public analyst, Dan Etokidem, which he titled, “Random Thoughts! ..300 bed Ituk Mbang Isolation Center & the Ephraim Inyang in all of us”. In his first paragraph, he wrote, “He is not new to controversy, neither is he afraid to be involved in one once his convictions aligns with his passion and zeal. While his predecessor was hardly heard but seen, Inyangeyen is not only heard but loudly heard and visibly seen- that’s his style and he gets results with his own methods.” I tell you, for free, he is speaking the general sentiment.

I am not unaware that, many people have wondered aloud, why Inyangeyen gets the nod of his boss, to anchor, supervise and executive critically urgent and time- barred project’s. “Why Always Inyangeyen?”, can be heard from the unspoken words of other high ranking Government officials, Career Critics, Cynics, Opponents, Detractors, Commentator’s, Onlookers, Bystander’s, and yes, those they also call, Crumb eaters.

I don’t envy Commissioner Inyangeyen if you do. Uneasy lies any head that wears the crown of the vote of confidence from the King. You can’t imagine the pressure this man goes through and the grudge wars he has to contend with in the line of duty. Good enough, as the lbibios say, ‘adong eyén utöm, isi top’ô nkē, translated, the kings messenger does not speak in parables. Reason, he has to hit the ground running.

The incontrovertible truth is that Governor Emmanuel is not being nepotistic by banking on Inyangeyen to yield to and deliver on those emergency driven top jobs. The Governor is smart and has profoundly weighed the pro’s and Con’s. He knows who has the structure, the stamina, the fidelity, and commitment to deliver with no excuses.

It’s just 28 days since the actual commencement of the 300 bed Isolation Centre project and the 20 ensuite Doctors Quarters at Ituk Mbang. You will be amazed, the job is 95% complete and will most likely meet the 30 Days deadline given by Governor Emmanuel for the project to be made available for the massive fight against COVID-19.

Inyangeyen has used his goodwill and clout to mobilize corporate social responsibility support or back up from construction giants like, Hensek, VKS Construction, Bulletin Construction, Cossel, Nigerpet Structures, and DPL to facilitate the speedy execution of this project with their heavy equipment’s. Governor Emmanuel made a smart choice in saddling him with this task.

When H. E. Distinguished Senator Chris Ekpenyong led the National Assembly Caucus to inspect the job among many other interest groups and Stakeholders who have come to, what analyst’s now label, the ‘Mecca’ in Akwa Ibom state, they registered high praise for the governor and his aide, Inyangeyen.

So, Why always Inyangeyen? I revert to Etokidem in the afforestated piece, where he also wrote: “Ephraim Inyang to achieve the timeline of beating the deadline for the completion of the Isolation Center has personally spent hours on the project site – supervising, coordinating, advising, intervening, explaining, etc. Give it to him that once he directs his energy to something he believes in, he gets things done. Does he even sleep at all these past few weeks or does he sleep at the construction site?”

Having reported on this workaholic in the last four years and counting, let me answer his question and say, Inyangeyen works relentlessly around the clock. Never rests on his oars. Doesn’t brook excuses why it can’t be done. Abhors mediocrity. Uncompromising with deadlines and doesn’t take No for an answer. All these, while remaining resolutely, a perfectionist.

That is Ephraim Inyangeyen for you. The Isolation Centre as i write is almost ready. Like him or hate him, he has never failed in any critical task assigned him by his boss. So, it is not really his making, it is all about Governor Udom Emmanuel and what he wants to get done.

You can connect with the Commissioner via his Facebook on https://www.facebook.com/ephraiminyangeyen