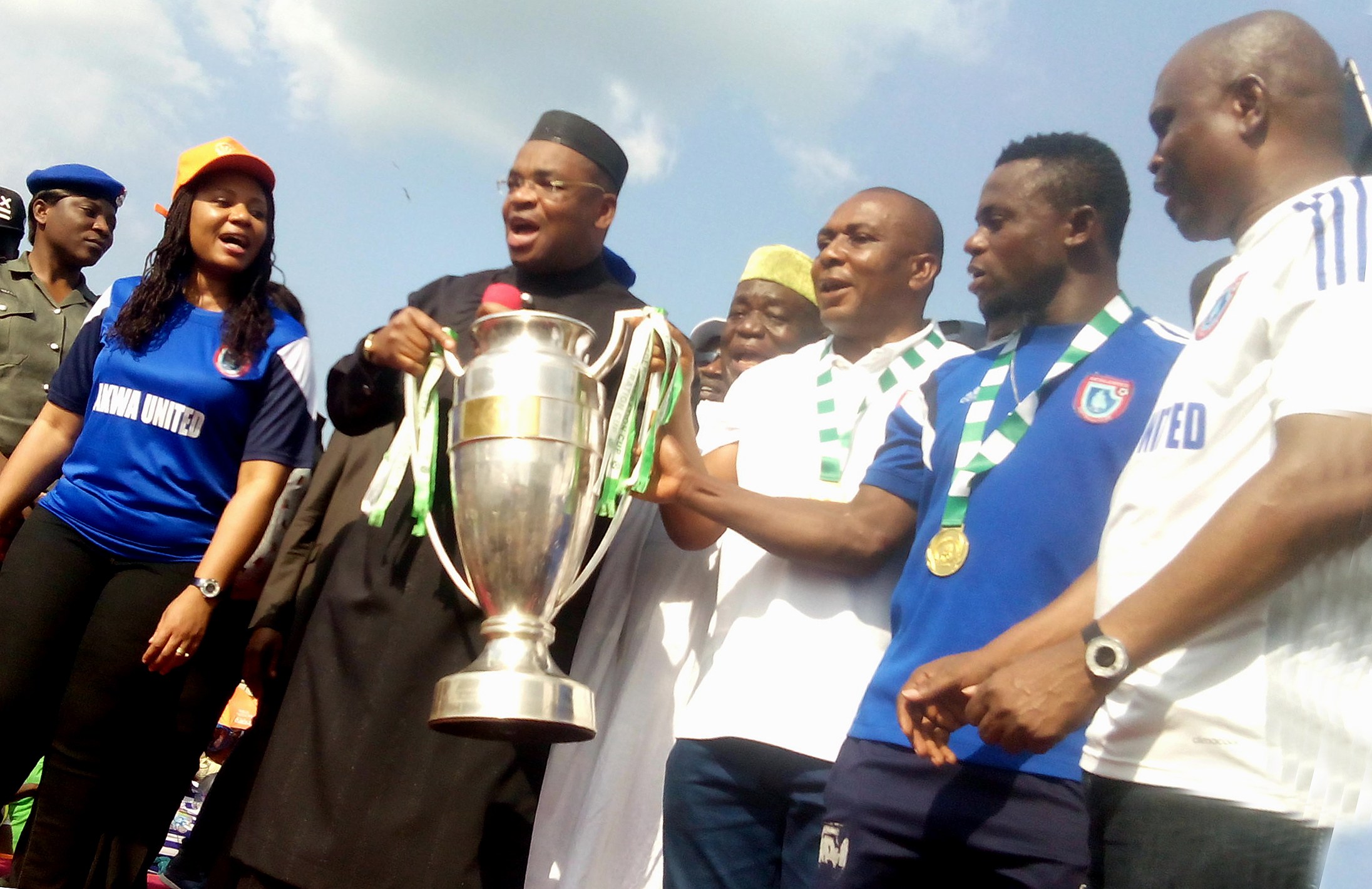 The 10 days sporting event which was held at the University of Ilorin, Kwara State began on the 7th – 17 September, 2018. 29 States out of 37 States including the Federal Capital City registered for the games.

Before the beginning of games, there were insinuations as it concerns the credibility of screening of athletes that would participate in different sports. While some people who have been in sports administration over the years where poundring on how the 4th edition of National Youth Games will contribute to the development of grassroots sports, some were expecting the best in all ways as well as improvements compared to previous editions.

As preparation for the games were in top gear for the games to kick off proper, the Director of Grassroots Development in the Federal Ministry of Sports Development, Dr Ademola Are had a media chat with pressmen. Speaking, he promised that he will do everything possible to ensure all overage athletes registered by their different States are disqualified during screening exercise.

He had told the press that this year’s National Youth Games would be different from previous editions and as such the Federal Ministry of Sports Development will take necessary steps to ensure some of the challenges faced in the previous editions dose not repeat itself.

He had noted that one of the things that will make the 2018 edition of NYG successful would be the checking of age groups of the participating athletes, assuring that the screening committee will do a thorough job.

While maintaining the Ministry’s determination, Dr Ademola Are said, “We are not after any birth certificate of any athletes, rather we will see their faces and know how old they are.”

The Federal Director of Sports stressed that the aim of the National Youth Games was to identify talented athletes across the country which would be handed over to various Sports Federations for them to be groomed for future competitions both within and outside Nigeria as the case may be.

Days later, Dr Ademola Are called for a media chat again. This time around he spoke on the ineligible athletes. He disclosed that the screening committee had disqualified over four hundred (400) athletes from across the participating States including athletes from Akwa Ibom State because of one reason or the another especially overage athletes.

Dr Are also said that though some were disqualified, some of them were readmitted by the Local Organising Committee after screening when the State had presented documents to corroborate the athletes age claims.

Going further to read a press statement that was singed by the Permanent Secretary Federal Ministry of Youths and Sports, Dr Olusade Adesola on the challenges faced at games, Dr. Ademola Are also admitted that there were initial issues about the quality of accommodation at the University hostels (camps where all athletes were checked in and registered), but the issues were quickly resolved and the games had proceeded without further hiccups.

According to the press statement, “There were mechanisms put in place to handle routine complaints that may occur in the organization of events of this magnitude. Remarkably, the complaints have been minimal. Under Rule 16 of the National Youth Games, each athlete or official that stays in the Games Village pays a N15,000 fee to augment the cost registration, accommodation, and feeding for the 10-day duration of the Games. The objective is to lessen the burden of participation by the States and Federal Capital Territory.”

“The Ministry, in realization of the important of the Games in talent hunting great athletes for our Country’s future presence in international competitions, is investing millions of Naira in subsidizing the participation of the States and Federal Capital Territory. In line with the expectations’ of the Ministry that excellence should be exhibited in the organization of its events, the Ministry has noted the lessons from these Games amongst other inputs for the planning of future Games.”

However, the Ministry is introduced a lot of new things in order to make sure athletes have a memorable participation in the games. Some of such, was the provision of accommodations, excellent prompt feeding of the athletes, souvenirs to the registered athletes and Akwa Ibom athletes were not left out.

With all this, one would have expected an improved performance from Akwa Ibom athletes. But the opposite was the case. Akwa Ibom State after finishing 2nd on the medals table last year, came out 5th in this year’s edition. So many challenges played out. Beginning from camping, preparations to the screening exercise.

As one of the pressmen who was part of Akwa Ibom State contingent to Ilorin, comprising of a total number of 178 athletes and 76 officials including coaches, organising secretaries, camp commandants, medics and other supporting staff, it didn’t work out as planned. Reason was because so many of the State’s stathletes were screened. Some were disqualified with reason that they were overage, while others had one issue or the other that led to their disqualification. Another challenge the State faced was the officiating by the officials.

This really distabilized Team Akwa Ibom. For instance, in female football, all the players were disqualified except three, and in the male category of football, most of the players were disqualified except eight. The coach had no choice than to filled out the eight players against eleven in the opposite side. Same situation happened not only to football, but other sports. Upon all this, Team Akwa Ibom did not relent effort. They fought till the final day.

In as much as I don’t blame the athletes or coaches for not taking the State to the first position that Akwa Ibom deserves after finishing 2nd last year on medals table, I will suggest that those concern should go back to the drawing board. They should come up with a new strategy that will help the State win more gold medals in subsequent edition of National Youth Games.

Akwa Ibom had tough 2018 edition of National Youth Games , with their initial planned suffering set back after most of their athletes were disqualified and pressure being on the remaining ones to win medals, and it seems likely the same will be repeated in subsequent edition of the game if the State failed to start now to groom future athletes.

Not only grooming them, the government should motivate and have a good relationship with them (athletes and the coaches). This I believe will go a long way in papering the State for future sports games

I will not also want to channel my blame to the screening committee since I was not part of the screening. But at the same I was monitoring the process. But each time I sighted a verbal protest by one or two coaches at the screening point, I began to asked myself what was going wrong. That is by the way.

What my eyes saw at Ilorin was individual determination my the athletes and not a team work. But speaking separately with the Akwa Ibom media team shortly after the closing ceremony, the Permanent Secretary, Coach Aniedi Dickson said though the results were not good as expected, no blame should be portion to anybody. He maintained that the screening really affected the team because some of the star athletes we screened out.

The PS promised that the team will prepare on time for next year edition. Hear him, “I thank the Governor and the Commissioner for Youth and Sports, Sir Monday Uko for the opportunity given to us to lead the contingent. We have done what order States have done. I promise that next year, we will improve”

The Director of Sports in the Ministry, Coach Lawrence Iquaibom said “I’m not happy with the 5th position. But we have learned our lessons. The were some mistakes but we will correct them in subsequent editions. We will surprise everybody next year. It was a tough competition. Coach Iquaibom said.

Personally, I want to thank the Commissioner for Youth and Sports, Sir Monday Uko for his support and also making sure that funds were made available and the Senior Special Assistant to Governor on Sports, Elder Paul Bassey for ensuring Akwa Ibom State participated in the games.

I will not fail to commend the leaders of Akwa Ibom State contingents, the Permanent Secretary, Ministry of Youth and Sports, Coach Aniedi Dickson and the Director of Sports, Coach Lawrence Iquaibom for their selfless determination to ensure Akwa Ibom State had success in games. These two men were running from one game centre to other as well as the games village (University of Ilorin) which is as big a Local Government interms of landmass.

However, Team Akwa Ibom tried thier best in Ilorin. Their individual impressive performances was highly commendable by spectators. Generally, the games was very successful and a memorable one.