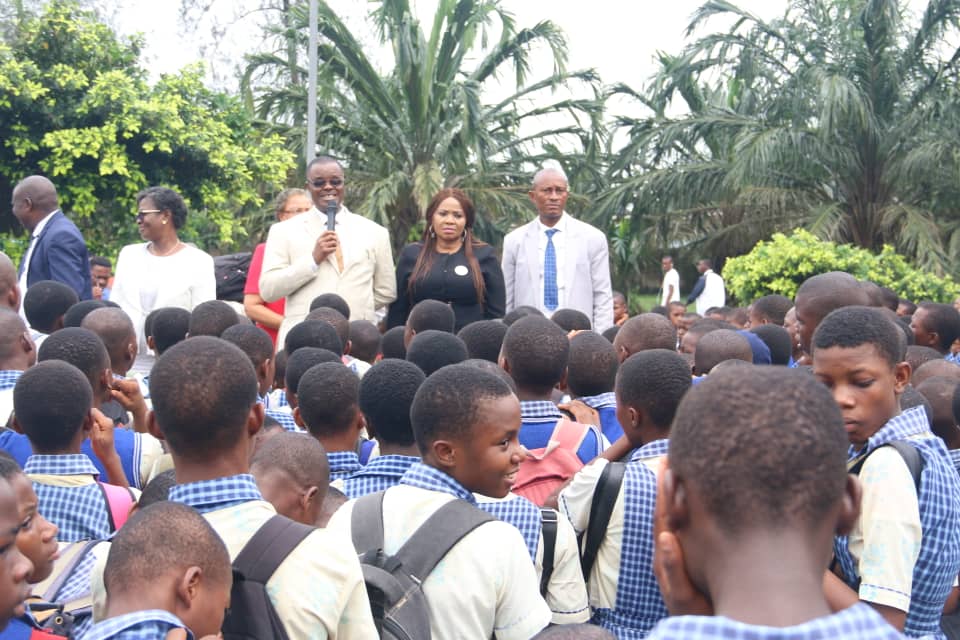 In what can be described as a timely intervention, the State government today took steps to quell the recent crisis and uproar that rocked Secondary School Etoi in Uyo LGA. The Honourable Commissioner for Education, Prof. Nse Essien led management staff of the Ministry and other Education stakeholders to assess first hand the situation of things with a view to proffering lasting solutions.

It was gathered that some senior students of the school attempted to burn down the school building, destroy the school farm and properties, held the Principal hostage and fought security personnel who arrived to calm the situation, however some of them were apprehended.

The Commissioner who decried the dastardly misbehaviour of the students stated that the school was the right of everyone and as such should be protected. Government he said will not fold its hands and allow hooligans take over the school as members of the student and staff population found culpable will be severely punished.

The Commissioner noted with dismay that some of the students who perpetrated the violence reported in the school were not bonafide students but paraded themselves as such. He therefore sued for the cooperation of everyone including the security agencies to ensure the bad eggs are thrown out.

Prof Essien reeled out the names of 71 students of the institutions to be suspended indefinitely for violent acts and insubordination except proven otherwise. Some of the names he said were gotten from intelligence, stressing that further names will be revealed in due course. This he said was a measure to sanitise the system and serve as deterrent to others.

He stressed that the final year students among them will have their names removed from the WAEC list to further buttress government’s zero tolerance for indiscipline. He maintained that punctuality was of utmost importance and that government was averse to loitering during school hours. Essien advised the students to take their studies seriously, maintain good conduct and go about their normal academic business without fear while expressing optimism that the school will make the State proud in the near future.

While addressing teachers and staff of the school, The Education Boss instructed that no student should be admitted without a transfer certificate from his previous school stating the reason for the transfer accompanied by a behaviour report. Teachers he said share a blame in the ugly incidence as their conduct was also called to question.

He decried lateness among the teachers stressing that serious action would be taken to correct the anomaly. “As teachers, you share a blame in this menace as its your job to instill discipline and forestall a breakdown of law and order in our schools. Any teacher who is accustomed to lateness, negligence of duty and other forms of misdemeanor will face serious sanctions”, he said

Afterwards, the Commissioner paid a visit to Uyo High School were he cautioned the students against lateness stressing that Uyo High school was notorious for truancy and inter school clashes. He urged students to make available any information that would assist government get rid of the bad eggs among them. Addressing the teachers, he enjoined them to be good examples to the students and also contribute immensely to character development. Teachers he said were liable for any behaviour portrayed by the students, urging them to consider their responsibility as a service to God and humanity.

Delivering the vote of thanks, Principle Uyo High school, Mr. Michael Iwok lauded the Commissioner for the timely visit and promised to redouble effort in ensuring the negative impression about the school is corrected. The school he said was reputed for churning out quality academic ambassadors while giving assurances that his staff would remain committed to sustaining the trend.