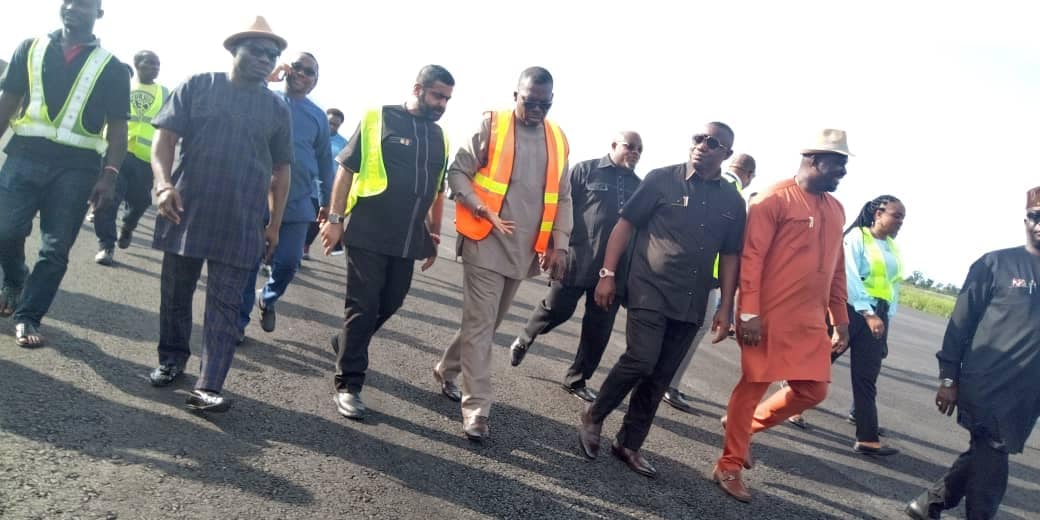 The Member representing Esit Eket/Ibeno State Constituency, Dr. Usoro Akpanusoh, has advised the contractor handling the 3.6km 2nd Runway at the Victor Attah’s International Airport not to play politics with the project, stating that the project is so dear to the people of Akwa Ibom State and the entire world.

Dr. Akpanusoh, who is a member of the Special Projects Committee which is chaired by the member representing Ibesikpo Asutan State Constituency, Rt. Hon. Aniekan Uko, expressed dissatisfaction over the delay in the project completion despite government effort to have provided funds as was agreed and signed between the government and the contractor (Gitto Construction).

Akpanusoh, stated this yesterday when the House Committee Chairman on Special Projects, Monitoring and Implementation, Rt. Hon. Aniekan Uko, led members of his committee to Victor Attah’s International Airport on a fact finding tour to enable the committee determine level of job done at the ongoing 2nd Runway.

“I understand that this contract was awarded long ago which is yet to be completed and the contractor cannot specifically brief this Committee on when this project will be completed. The whole state, nation and the entire world are anxiously awaiting the completion of this 2nd Runway”. Akpanusoh said.

Akpanusoh who equally is the chairman House committee on Rural Development and Public Utilities emphasized that every contract has its terms and duration, adding that the 2nd Runway contract may be terminated should the contractor (Gitto Construction) fail in delivering the project accordingly as was agreed and signed between the company and the State government.

“I want to advise you not to play politics with this very project. The Governor of Akwa Ibom State is very hopeful that this project be completed within the time frame as was agreed”. Akpanusoh added.

He went further and expressed optimism that the Victor Attah’s Airport may likely be changed to a Cargo Airport in the future. He advised that quality of materials used and specifications as well as global regulatory standard be adhered to by the contractor. He commended the efforts of the commissioner for Special Duties, Mr. Okpolupm Ette and his counterpart at the Ministry of works, Akparawa Ephraim Inyang, on their competency and capacity showcased in their respective Ministries for ensuring that the quality and standard of materials used for the project are within world class specifications.

“If you delay further, we as a committee will also take our own decision, let me commend the Management of the Airport because from what we have seen so far as compared to the last time we came here, we have not heard of any accident. This however shows high compliance to safety standard and growth”.

On his part, Mr. Ghanen Rasbech, of Gitto Construction company explained that the delay by its company was caused by a faulty heavy duty equipment (Paver) which he said has been sorted out. He assured the committee that the 2nd RunWay project would be completed without any further delay.

Earlier in his remarks,, the Chairman of the Committee, Rt. Hon. Aniekan Uko, whose delegation was received at the Airport by the Commissioner for Special Duties, Rt. Hon. Okpolupm Ette, alongside top management of the Airport, urged the contractor to ensure prompt and quality job delivery owning to the fact that the State government have kept to its own part of the contract agreement in terms of fund releases and provision of an enabling environment.

Other special projects inspected by the House Committee on Special Projects, Monitoring and Implementation include; Four Points By Sheraton Hotel and the Ibom Towers (21 Storey Building)