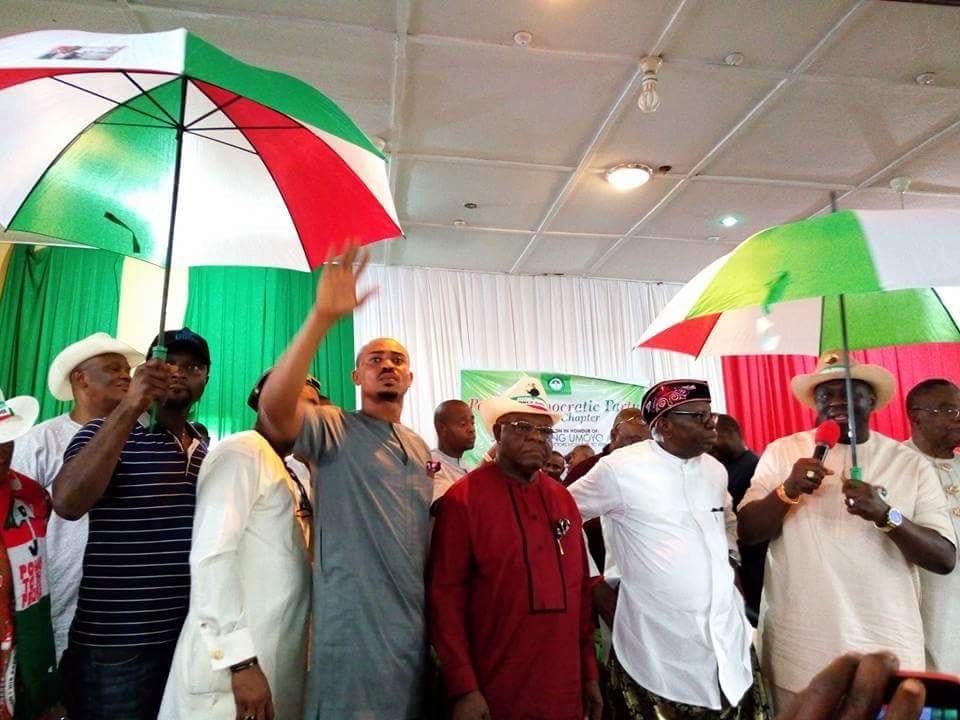 We stand today on the threshold of the most critical period in the political history of our dear Akwa Ibom State. It is either we assist in steering the political ship safely to harbour or we all perish without any hope of deliverance from the conspiracy of “evil men” who have entered the captain’s cabin with an intention to throw the captain out.

It is a time one must stand up to be counted on the side of truth, or falsehood. And I am exceedingly glad that all of us in this hall have decided to stand firm under the judgment of truth, as far as 2019 governorship and other elections in Akwa Ibom are concerned.
On September 6, 1998, (20 years by Thursday 6th ), many of us in this hall embraced with both hands a young and gentle baby at Ibom Hall. That baby was the ruling Peoples Democratic Party (PDP), 20 years old on September 6. The mission of the party was to build a modern democratic state founded on the cherished principle of justice, equity, fair play, popular participation and inclusiveness.

Apart from my financial contributions to the laying of the foundation of the party in Esit Eket, I teamed up with other politicians – notably Elder Ben Udobia, Chief Udo Edukere, Chief Victor Inuaeshiet, Friday Eteudo, Chief Okon Akpan Umanah (OAU), Chief Rex Assam, Chief Sunday Akansi and Elder Enobong Asubop – to mobilise grassroots support for the party. The result was massive victory in the presidential, governorship, National Assembly and State House of Assembly elections.

With the emergence of Obong Victor Attah from Uyo Senatorial District as the standard-bearer of PDP in 1998 and subsequent election in January 1999, the seed of rotation of the office of the governor was firmly planted in the political consciousness of Akwa Ibom.
Expectedly, Akwa Ibom people kept faith with the zoning arrangement and Ikot Ekpene Senatorial District produced Chief Godswill Akpabio as governor in 2007. And in line with the entrenched zoning principle, Eket Senatorial District was appropriately established in the governorship map in 2015, after an attempt to scuttle and take away what rightly belonged to it was resisted by men and women of good conscience.
In what later became a tumultuous agitation for power shift to Eket Senatorial District, I stood up to be counted, as usual on the side of truth, equity, fair play and conviction as early
as 2011.

That was a time former governor Akpabio could not even talk about power shift to Eket Senatorial District because of his deceitful promise to make Obong Umana Okon Umana his successor. I formed the Eket Senatorial District Forum, and held its meetings in the facilities graciously donated to us by Her Excellency Senator Helen Esuene. On Monday, January 23, 2012, the forum took two pages in the The Nation Newspaper (pages 44 and 45) and in the Sun Newspaper to present its position on the 2015 governorship race. We captured the need to sustain the zoning arrangement in the state. The forum also responded to the claim by Uyo Senatorial District Elder’s Council that since the advent of democratic dispensation in Akwa Ibom, the position of the governor had never been zoned to any senatorial district.

To add steam to the advocacy, I published a local tabloid – Weekly Post Newspaper – and took the agitation to Akwa Ibom Convention in USA. And in a paper entitled “Governor for Eket Senatorial District come 2015: The Panacea For Continued Peace, Stability, Unity And Progress In Akwa Ibom State.”I addressed Akwa Ibomites in Washington D.C on August 15, 2014, on the need to maintain the zoning arrangement in the state.

The advocacy gained widespread support, and Akpabio later drew huge strength from it. I am a proud worshipper of my convictions and will remain so to the last day. I did not do what I did because my son or daughter was contesting the governorship election in 2015. So, it was not about Senator Etang Umoyo, but about truth, equity, fair play and justice.
Although I did not subscribe to the process that produced Mr Udom Emmanuel as the governor, I accorded him the necessary respect and recognition as the father of all of us. So far, Governor Emmanuel – from my assessment and consensus opinion in Akwa Ibom and beyond – is doing well and, therefore, deserves my support for a second term. I have seen sincere commitment on the part of the governor to leave Akwa Ibom better than he met it. The provision of basic infrastructure, aggressive pursuit of his policies, and strategic intervention in critical areas of need; particularly in power infrastructure, health and educational facilities, Emmanuel has reinforced and fulfilled the intention of government, which is the welfare of the people.

Strangely and just at the time the incumbent is seeking a re-election, a right that is consistent with tradition and constitutional provisions, a spanner is thrown into the works by the person who cleared the way for the emergence for the current custodian for our trust and mandate. If the spanner was thrown by any other politician, it would have been understood, but coming from a “friend”, who has suddenly become “Brother Brutus”, makes it more revealing for what it is: a plot to disgrace Caesar.

I am not given to dancing around the truth. The current plot is aimed at disgracing an Ibibio man from Eket Senatorial District the same way Dr Clement Isong was disgraced out of office in 1983. But, I thank God that Akwa Ibom people have seen through the shenanigans.

If what happened in 1983 was a mistake, it would be a decision and a norm if it happens again in 2019. A career banker, who was doing very well on his job, was invited to come and serve his fatherland. He had never come to Akwa Ibom to lobby for any political position. However, I want to thank the people of Ikot Ekpene Senatorial District for standing up to be counted on the side of truth, justice and fair play, at a time like this. The story of the shenanigans would be told with positive or negative flair, perhaps 12 years from today, when our brothers from Ikot Ekpene Senatorial District shall come to seek the support of Eket Senatorial District for one of their own to become a governor. Some of us here may not be around then, but our actions today have been recorded for us and will form part of the story.

Politicians may attempt to reinvent history to suit their interest, but the facts are always accessible to everyone. And the history before us in the governorship race is that Ibesikpo Asutan Local Government Area in Uyo Federal Constituency/Uyo Senatorial District produced a two-term governor, Obong Victor Attah (1999 -2007). Essien Udim Local Government Area in Ikot Ekpene Federal Constituency/ Ikot Ekpene Senatorial District got the same fair treatment in the election of Obong Godswill Akpabio for two terms (2007-2015). Why would the case of Governor Udom Emmanuel from Onna Local Government Area in Eket Federal Constituency/Eket Senatorial District be different? The popular saying that what is good for the goose is also good enough for the gander applies here.

Of course, I have been blackmailed because of my firm commitment to the judgment of truth, conviction and nobility by one Eseme Eyiboh and others, who have alleged that I have been bribed by Udom Emmanuel to destabilise my former party in Esit Eket Local Government Area.

While my lawyers are handing the matter, I hereby declare that I am beyond any price. My convictions over the years are sufficient testimonies to my integrity. No one can shut out the people from his or her story. The people would readily resist any attempt to distort the story of anyone in the society. So, the people of Akwa Ibom know the story of Eseme Eyiboh. The paid advertorial in the Daily Sun Newspaper of Friday, June 17, 2011 (page 44) placed by the law firm of Livinus Udofia and Co, acting for well-known individuals of Eket Federal Constituency Extraction tells the story of Eseme Eyiboh correctly. The leopard cannot change its spot.

Again, I assure all of us here in the words of Frantz Fanon: “I am a slave”, just as you are, “of a cause, of the people: the cause of truth, the cause of justice and equity.” I have today returned to the house I helped to build. I endorse Gov Emmanuel for a second term. I thank you all!

•Being text of a speech by Senator Etang Umoyo at Uquo, Esit Eket, on Tuesday September 4, 2018, on his return to the Peoples Democratic Party (PDP).