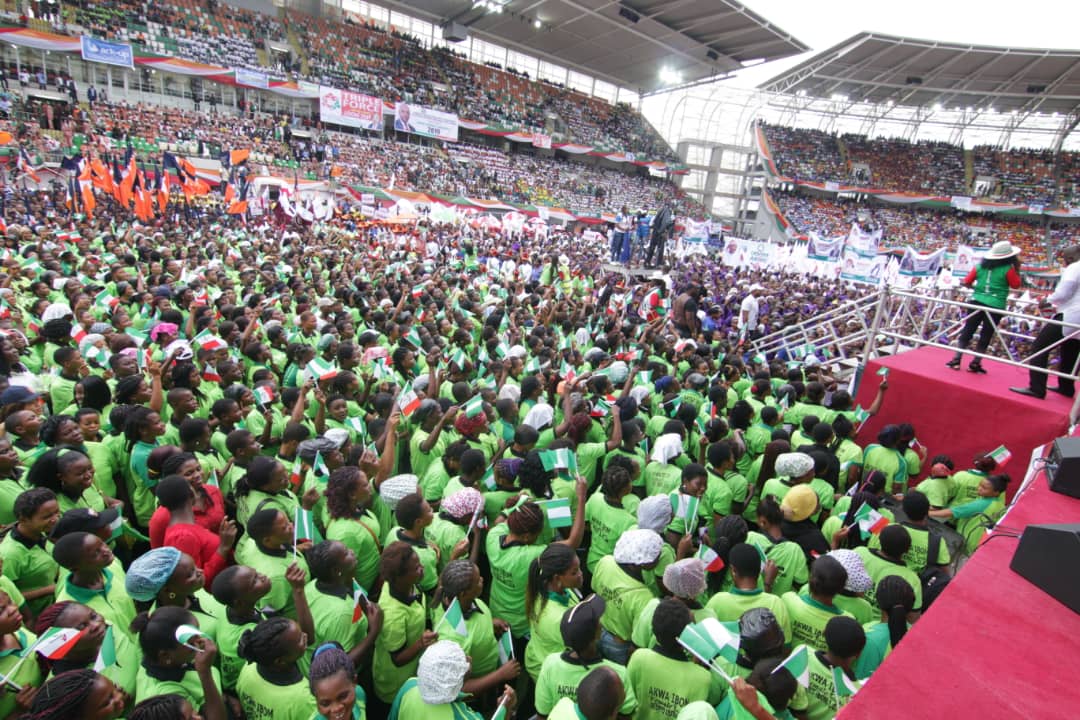 No fewer than 90,000 Akwa Ibomites defied the early downpour to throng the Godswill Akpabio International Stadium,Friday for a historic second term declaration by Governor Udom Emmanuel.

Governor Emmanuel accompanied by his wife Martha, Governors of Abia and Rivers States, Dr. Okezie Ikpeazu and Barr. Nyesom Wike as well as former Governors of Akwa Ibom and some other states, the deputy Governor Moses Ekpo, state and national lawmakers as well as other major stakeholders in Corporate Nigeria, watched with admiration as the state stood still in support to the Governor’s return to office in 2019. 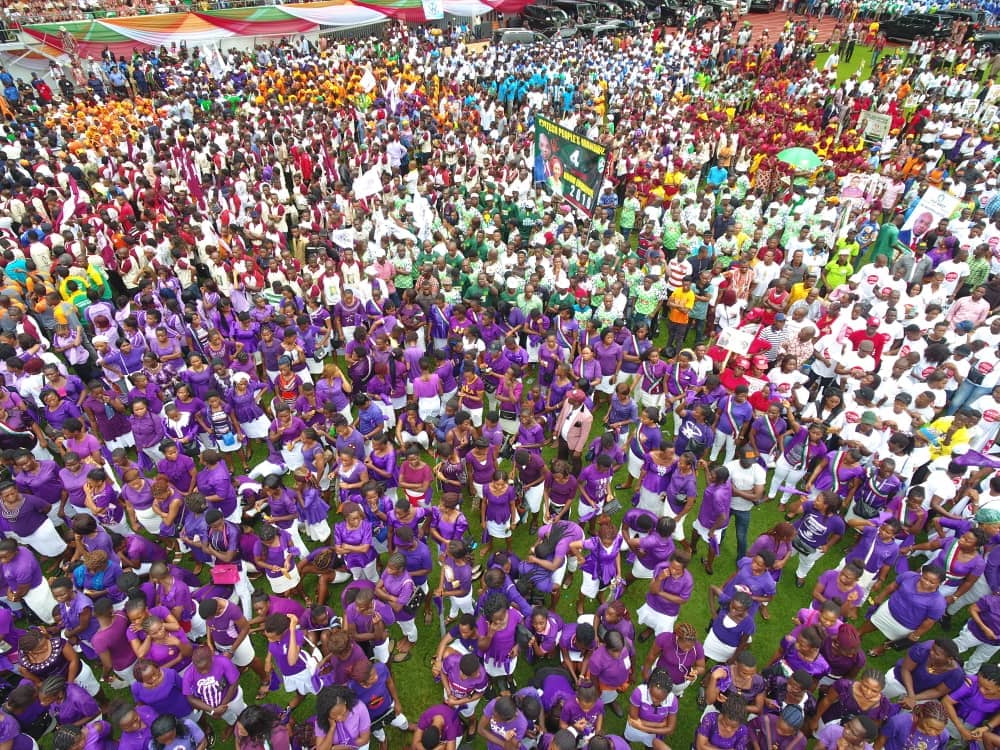 Speaking at the event, Governor Udom Emmanuel said he was presenting himself before his people, “for consideration to continue the good works you have so far helped me to achieve as your Servant-Leader on the platform of the only political party that Akwa Ibom people have trusted in the last 19 years of our democratic governance, the PDP.

Governor Emmanuel whose attempt to reel a summary of his accomplishments was received with affirmative echoes across the Nest of Champions, stated that despite the cloudy economic horizon,and a significant drop in the federal allocations to the state, his people showed great support and understanding and through their prayers his government was able to “navigate the troubled waters and come up with our heads held high, paying salaries, pensions and gratuities where elsewhere workers were groaning in pains of months long non-payment of salaries.” 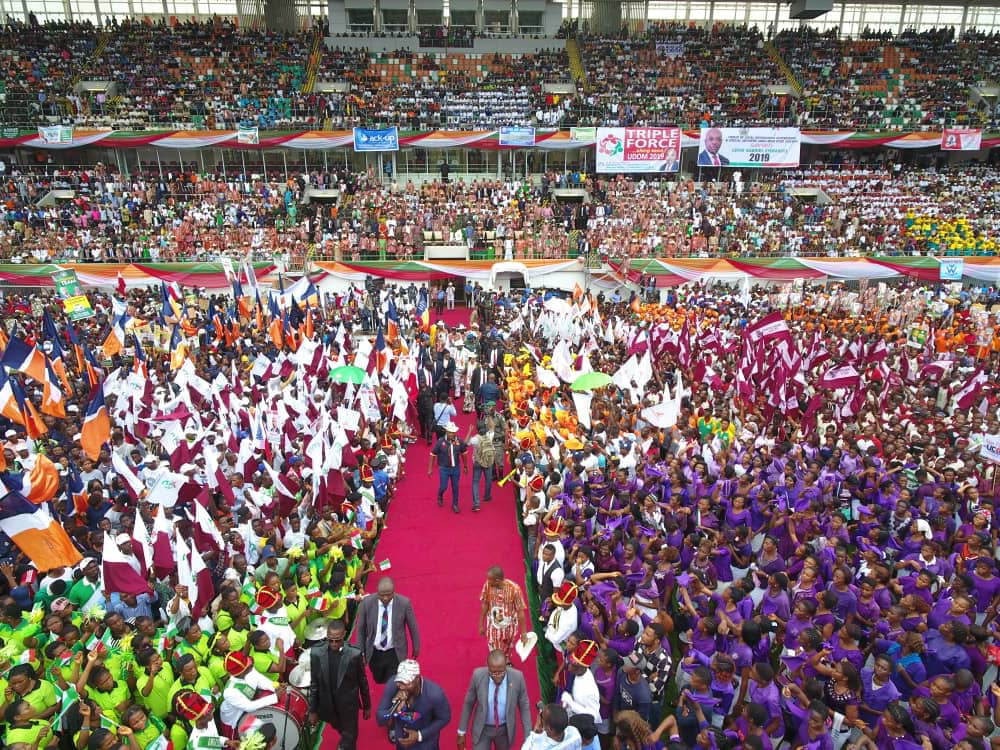 He recounted the success story of his administration in the areas of massive investments in quality healthcare delivery, food security and affordability, and education, adding that infrastructural development and provision of amenities such as economically viable roads had opened up the hinterlands for people to engage in commercial activities.

Acknowledging the aphorism that ‘a job well done means more job to be done,’ Governor Emmanuel commended the people for their cooperation which has led to the establishment of several industries in the state, promising that he will continue to rise above personal interest to work towards the overall interest of the state.

On the reported war threats by some opposition members in the state, the Governor was upbeat in rebuking such threats, saying that Akwa Ibom people should not be intimidated.

To all those who are saying that the politics of 2019 will be like Hitler’s invasion of Poland, we say Holy Ghooooost Fire. When those killers come, tell them that there is no vacancy in Akwa Ibom,” Mr Emmanuel fumed.

He said his administration has executed over 20 kilometers of the Uyo – Ikot Ekpene Road which he met at only 3km ready, adding that the Four Point Sheraton Hotel executed by the previous administration never had the trappings of a five star Hotel at the time he assumed office.

“It is only today that we are negotiating with Starwood group for the acquisition of the name ‘Four Points by Sheraton Hotel’ which someone surreptitiously put up on a building. We just did the electrical installation and other finishings, can you call a mere building a hotel?”

In their goodwill messages, the duo of Governor Wike and Ikpeazu admitted that those that defected recently from the PDP, cannot fault Governor Emmanuel on performance, but where only seeking their personal gains.

They described the Governor as a sincere God-fearing leader, and advised the people against being intimidated by the threats of insecurity by opposing politicians.

Setting the tone at the event, former Governor Idongesit Nkanga who is the Director General of the Governor’s Divine Mandate Campaign Organization said the Governor was merely coming to thank his people who have already gathered in several fora across the state to endorse him for a second term.

The issue of threat and blackmail formed the fulcrum of the message by the Chairman of the Central Planning Committee of the event and Speaker of the State House of Assembly who re-echoed his earlier allegation that he rejected an offer of N2bn and an offer of a deputy Governorship position, as a bait to have him defect to the APC by an highly placed federal government official.

The leadership of the various senatorial districts, also lend their voices in solidarity to the Governor. Speaking on behalf of Ikot Ekpene, former Deputy Governor Chris Ekpenyong, said “Governor Udom Emmanuel, everything is working for you because you are a child of God. We your in-laws are solidly behind you. We have our 600,000 votes intact.”
Dr Ekpenyong reasoned that, “if our son, the senator decides to leave us and go to another party, that is his political interest and one man’s political interest cannot supersede the interest of a people.” 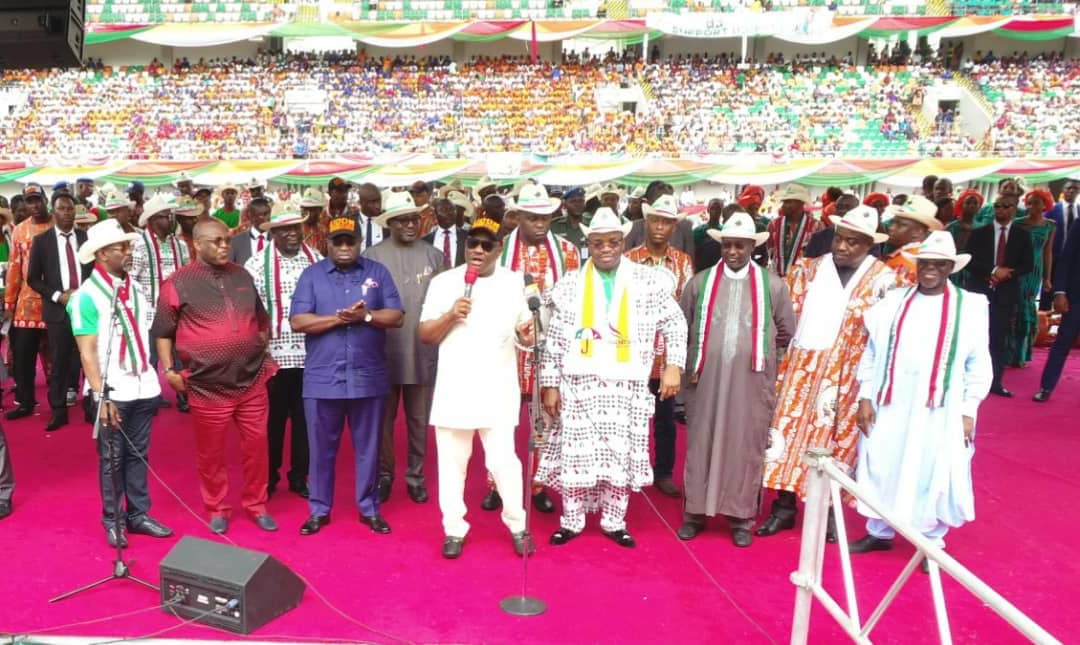 This was corroborated by another former deputy Governor, Sir Etim Okpoyo who said his people in Eket Senatorial District have endorsed the Governor for a second term and will ensure that they support resonates in all units in the district.

For the people of Uyo senatorial district, it was more of a challenge than a mere submission as they maintained that the zoning formula which favours them in 2023 would be truncated if any other candidate from Eket senatorial district emerges in 2019 to prolong their wait for another eight years.

Senator Anietie Okon and Effiong Bob were resolute in daring any opposition force to come and meet with fierce resistance in Uyo senatorial district.

On their part, the Chairmen of the 31 local government areas, affirmed the support of their people to the re-election programme, saying to the Governor, “you have made us happy, by accepting to run for a second term.
“We were 31, and we are still 31. You have our support. Any one that says he is going to overrun Akwa Ibom, must first contend with us, all 31 of us.” Mr Frank Archibong asserted.

Goodwill messages were also received from the women through Senator Helen Esuene, the youths through the State Chairman of the Youth Caucus, Aniedi Iwa Udofia as well as the children from the state children’s parliament.

Appreciating the support, the state Chairman of PDP, Mr Paul Ekpo, said “in 2014, we had G23 but today we only have G1 and that is because you have performed well. We will still go ahead with the other election formalities and we are surely going to work and return you in 2019.”

Previous Akpabio is not God, he can’t stop me – #UdomDeclares
Next Akpabio May be Arrested as White Paper on Four Point By Sheraton Ikot Ekpene Indicts him