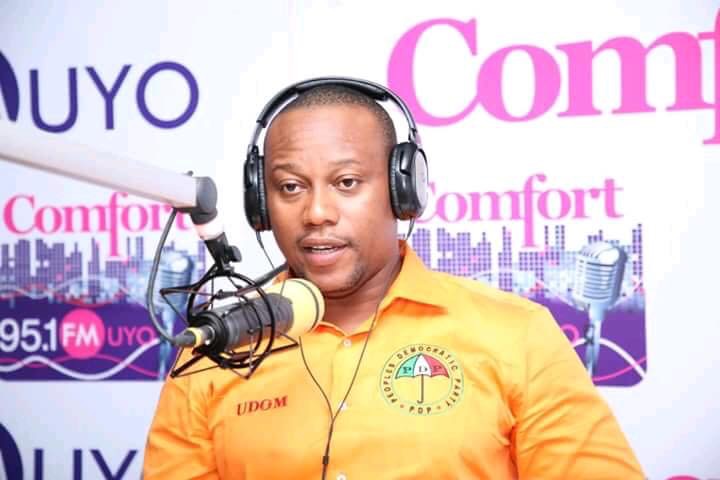 –As he bags The Role Model Award

Poor electoral system has been observed as the major cause of the unhealthy political competition among politicians in Nigeria which usually leads to the poor quality of leadership experienced in the country; missing names of registered voters during elections; intimidation and disenfranchisement of voters; multiple and underaged voting; snatching and destruction of ballot boxes; falsification of election results as well as loss of lives; and, Electronic Voting System could help curb some of these ill issues if adopted into the Nigeria electoral system.

Comr. Ini Ememobong, the State Publicity Secretary of PDP in Akwa Ibom State made this known today while presenting a lecture on The Nigerian Electoral Process: the Price of Ignorance and the Need to Adopt an Electronic Voting System (A Case Study of the Nigerian Bar Association) during the 2019 Young Men’s Business and Leadership Colloquium organized by the Methodist Church Nigeria, Uyo on the theme: The Deligent Men.

Comr Ememobong who was represented by the Media Relations Officer, Publicity Secretariat, People’s Democratic Party, Akwa Ibom State, Morgan Ekanem, Esq stated that in 2018, the Kaduna State Government adopted the e-voting system in their Local Government elections; and, the sum of 1.7 billion naira, the cost of printing ballot papers alone was saved by the digitalisation of the electoral process and also noted that the process witnessed a reduced very minimal reports of rigging and other associated electoral violence.

Also using the Nigerian Bar Association’s elections as an example, the Publicity Secretary of PDP stated that the Akwa Ibom son who is the president of the Association, Bar Paul Usoro, SAN, would not have been the NBA president if the e-voting system was not introduced which indeed guaranteed equal opportunities to all the candidates at the elections.

According to Ini Ememobong, the e-voting system will bring numerous gains to the democracy of the country and electoral participation will increase; there will not be “too much need” of security; the rate of rigging and electoral violence will be reduced, adding that the effect of these will be a rekindling of the public’s trust on the electioneering process in the country.

He noted that though the transition from paper based voting system to the e-voting system may not be sudden, there is need to start planning for it as the local government election draws near in the state and also as the nation prepares for the 2023 general elections. He listed legislative approval; a complementary ICT infrastructure; timely training of the technicians among other needs as some of the factors to considered in the journey towards a transition to the e-voting system.

He acknowledged the fact that the e-voting system has its own flaws and is not completely perfect. According to him, the machines could be faulty; but he challenged the people to dare as the process will get improved as it moves on.

At the end of the presentation, the Methodist Church Nigeria (Young Men’s Fellowship) honoured Comr Ini Ememobong with the Role Model Award in recognition of his services to humanity as well as his exemplary leadership in the state. The Award was presented to Ini Ememobong by the President of the fellowship, Mr Uduak Okokon who thanked him for always allowing other people’s businesses to be his. He urged him to continue with the good deeds as God will surely reward him.

The Award was jointly received by Comr. Martins Inyangetoh, Immediate Past SA to HE on Project Monitoring; and, Morgan Ekanem, Esq.

Speaking on the award, Mr Ekanem noted that whereas it is not in the custom of his Boss, Mr Ememobong to receive awards, he was however optimistic that the award will challenge his Boss to stay on the path that distinguished him for the merit and prayed for the unedning grace of God to help his Boss stay on the path.