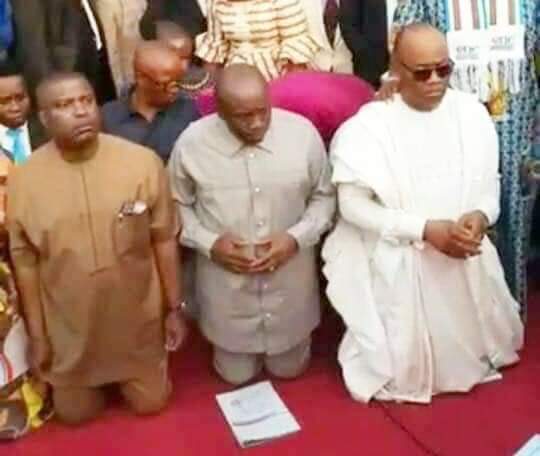 …Akpabio afraid of an early and empty return to Ukana

In the petition dated May 20, 2019 and signed by S. I. Ameh, SAN, who is the lead counsel to Senator Akpabio in the suit filed by him to challenge the declaration of Dr Christopher Ekpenyong as the winner of the National Assembly Elections for Akwa Ibom North West Senatorial District at the just concluded elections, Akpabio states that the Tribunal should be moved to Abuja for three reasons, thus;

Our investigations however revealed a clear contradiction on the goings on at the Tribunal and the reasons as filed by S. I Ameh of counsel to the petitioner. Our findings are that the case is at the pre-trial stage; at the last sitting of the court, the activity was the tendering of documents by INEC who has been joined as a Respondent to the petition. The issue of Senator Akpabio’s witnesses being “…attacked and prevented from gaining access to the Tribunal” therefore seem ill-conceived or premature in the circumstance as the event of the attendance of witnesses to the Tribunal has not yet arisen since actual trial has not commenced.

Our correspondent further gathered that there has been no violence of any form or resistance or attempt by any of the parties to prevent either party’s witnesses or supporters from accessing the Tribunal. He narrates that the court room is always filled to capacity by supporters of both parties by 8:30 am, minutes before the court sits at about 9 am, with the overflow strolling around the court premises till the court adjourns at all the appearances.

On the proximity of the Tribunal to the Governors office and it’s “susceptibility to the Governor’s influence”, a practicing lawyer in Uyo stated that the venue of the Tribunal is the traditional location of the High Court of Akwa Ibom State adding that such proximity has never been cited as a possible factor in determining the course of Justice, even by the most unlearned of men and therefore expressed regrets over such banal reasoning as a justification for seeking the relocation of the Tribunal.

Recall that Senator Akpabio and his party the All Progressives Congress (APC) had already made efforts before the commencement of the Tribunal to relocate the Tribunal from Akwa Ibom citing insecurity as a the reason for the prayer.

Comments from some political class in Akwa Ibom state reveal fear over the possible outcome of this petition. This fear, our correspondent gathers, is predicated on the fact that Senator Akpabio has severally
boasted that the President of the Court of Appeal is “in his pocket” and would declare him as the winner of the elections when the matter gets to the Court of Appeal. This assertion which first got to the media through the reports of his reconcilliatory meeting with Rotimi Ameachi, the Minister for Transportation, could again be gleaned from the unusual confidence with which the outgoing Senator spoke at his valedictory session at the 8th Assembly wherein he assured his colleagues that “he shall return to the Senate”. If truly the President of the Court of Appeal is in Akpabio’s pockets, then the Tribunal may be relocated.

A coalition of young lawyers in Akwa Ibom state, Akwa Ibom Young Lawyers Coalition however insisted that the Tribunal must not be relocated from Akwa Ibom State in the interest of Justice and to afford the young lawyers the opportunity to have a first hand experience in Election Petition matters, which they say they have already started learning since the commencement of the Tribunal’s proceedings. They dismessed the reasons stated by the petition in his call for the relocation of the Tribunal as “…fatuous and wanting in good faith”.