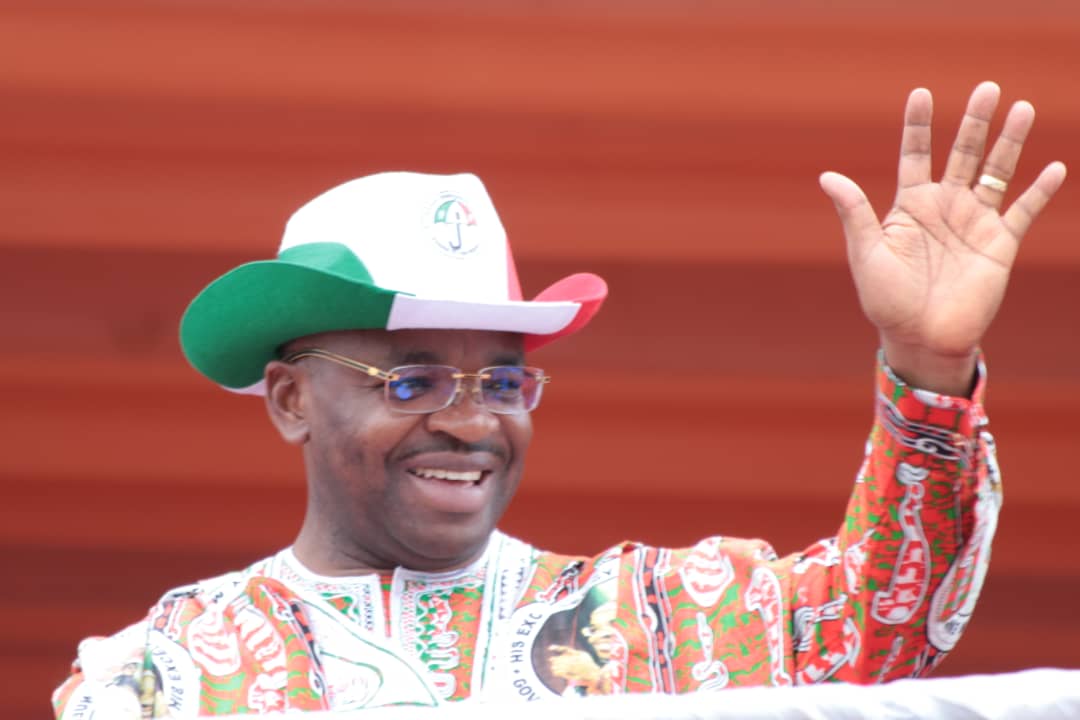 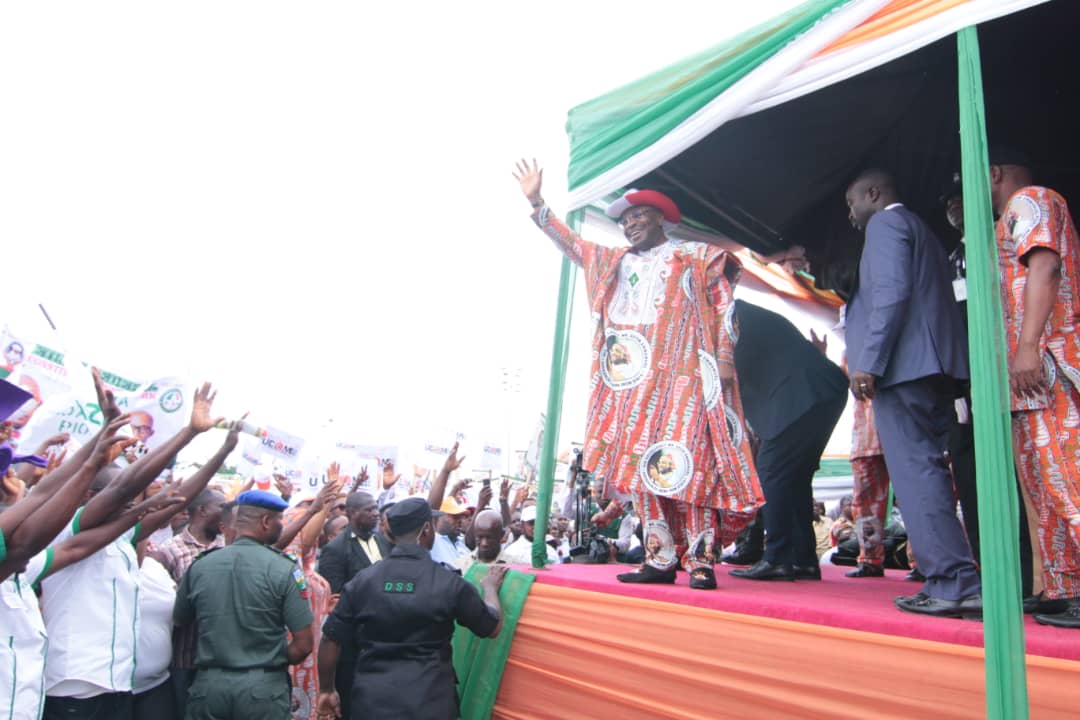 It was yet another exiting moment in Akwa Ibom State with the good people having cause to celebrate the 19th Democracy Day in the country, following the tremendous developmental feats recorded in all spheres of life in the state, giving credence to the age-long submission by Chief Obafemi Awolowo that ‘the worst civilian rule is better than the best military dictatorship’.

The Uyo Township Stadium, venue for the 2018 Democracy Day celebration to commemorate Gov Udom Emmanuel’s 3rd year in office as the Executive Governor of Akwa Ibom State, was on Tuesday agog by citizens over the massive achievements recorded in the state.

The mammoth crowd, which almost rendered security and protocol personnel helpless, saw citizens across the State defy the rains and stormed the stadium to show appreciation to the Governor for his superlative performance within his last three years of saddling the mantle of leadership.

Testimonies and congratulatory messages from various groups and organisations felicitated the Gov Emmanuel for the maintained stamina and tempo of his industrialisation drive, which has projected the state as the second largest driver of Foreign Direct Investment to the country Nigeria, as well as his compliance to international standards in road and bridge projects delivery across the state, which is second to none.

The Udom-led administration has, in the last three years, added values to the lives of every son and daughter of the state. Since assumption of office in May 2015, he has sufficiently ensured that workers’ salaries are promptly and regularly paid even in the face of economic recession ravaging the country. 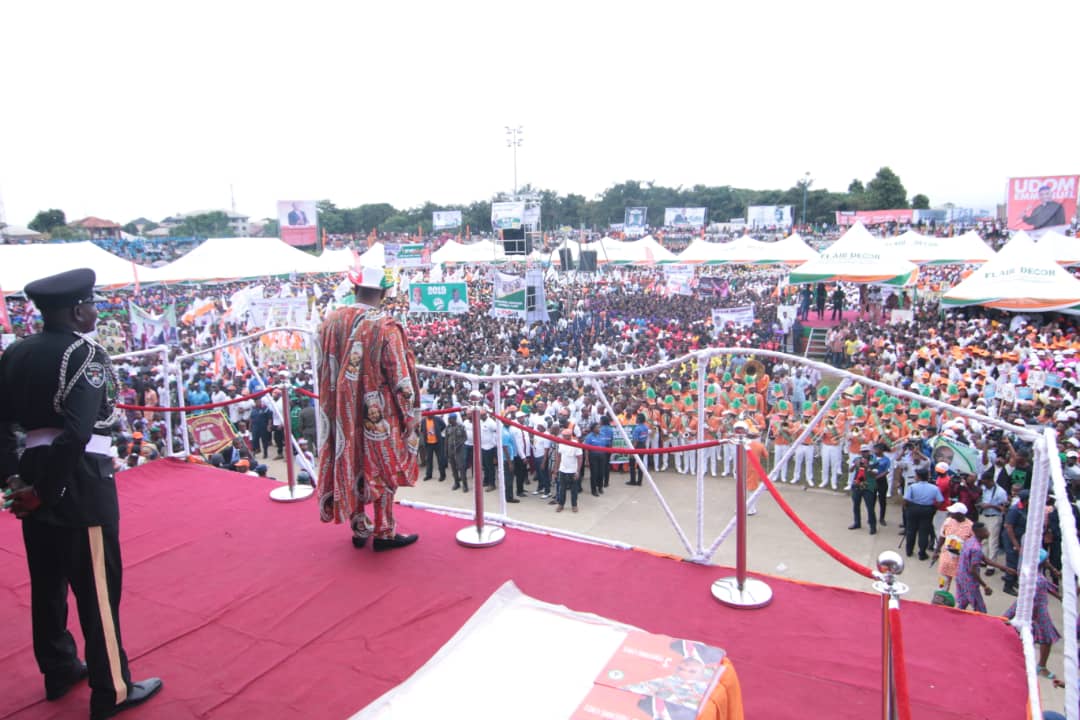 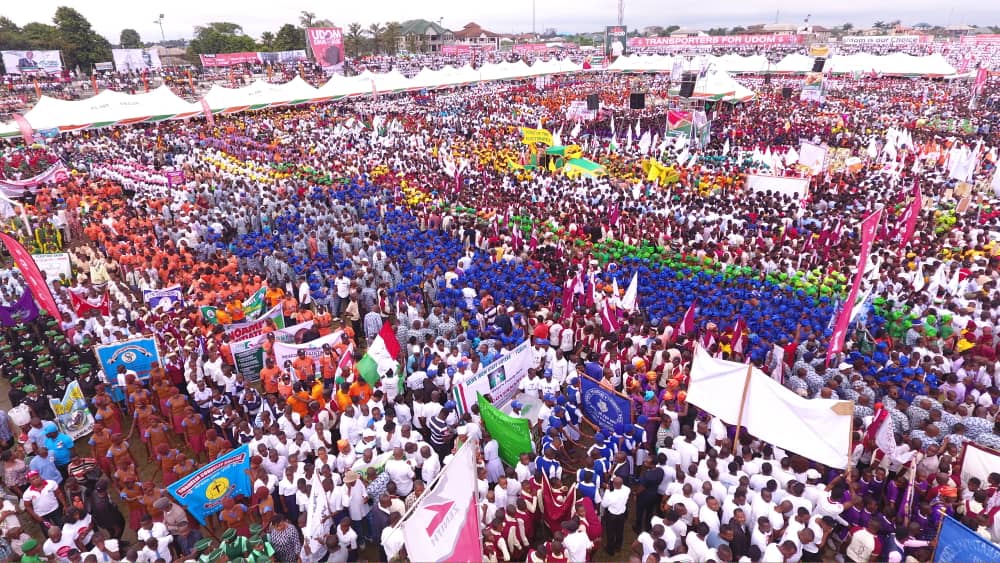 In the recent times, Governor Emmanuel has been nicknamed with several inscriptions including Mr Integrity, Mr Industrialisation and Mr Revolutionist among others following his radical revolution in agricultural sector in particular, targeted at food sufficiency which has delivered the state from the chains of shackles of hunger and death.

His industrialisation drive led to the advent of the Syringe Manufacturing Company, Akwa Ibom Entrepreneur and Enterprise Scheme (AKEES) Pencil and Toothpick Factory, infrastructure renaissance across the state, job creation, and resuscitation of the moribund Peacock Paint factory. Through the Dakkada philosophy, the people have been inspired to think outside the box for greater self-discovery.

In just three years, Governor Emmanuel has worked tirelessly to serve his people selflessly, redefined leadership through his sterling qualities of building goodwill across boards, fairness to all, and political inclusion. He has worked tirelessly at making significant differences in governance and has successfully created meaningful impacts among the down-trodden in the society, giving hope to the hopeless and vision to those who never had.

The Governor, who could be described as the Architect of the modern Akwa Ibom and a champion of a unique, passionate, pragmatic and people-oriented governance brand, has earned the State an enviable place in Nigeria as a case study of what democracy should mean for the people, cemented the state’s geopolitical fault lines, and delivered tangible socioeconomic dividends for the citizens.

In his Democracy Day speech, Gov Emmanuel reiterated his commitment to continue to impact your lives as enunciated in his Five Point Governing Agenda, because that is what government is supposed to be, and he remains dedicated to doing just that.

He appealed to all political classes not to unnecessarily heat up the polity or fan the embers of rancour and disunity among brothers and sisters, and urged to always remember that they were brothers and sisters before the coming of partisan politics.

Highpoints of the event were presentation and unveiling of the Udom Three Years of Touching Lives book performed by the Governor, and match-pass by the various groups and organisations in the state.