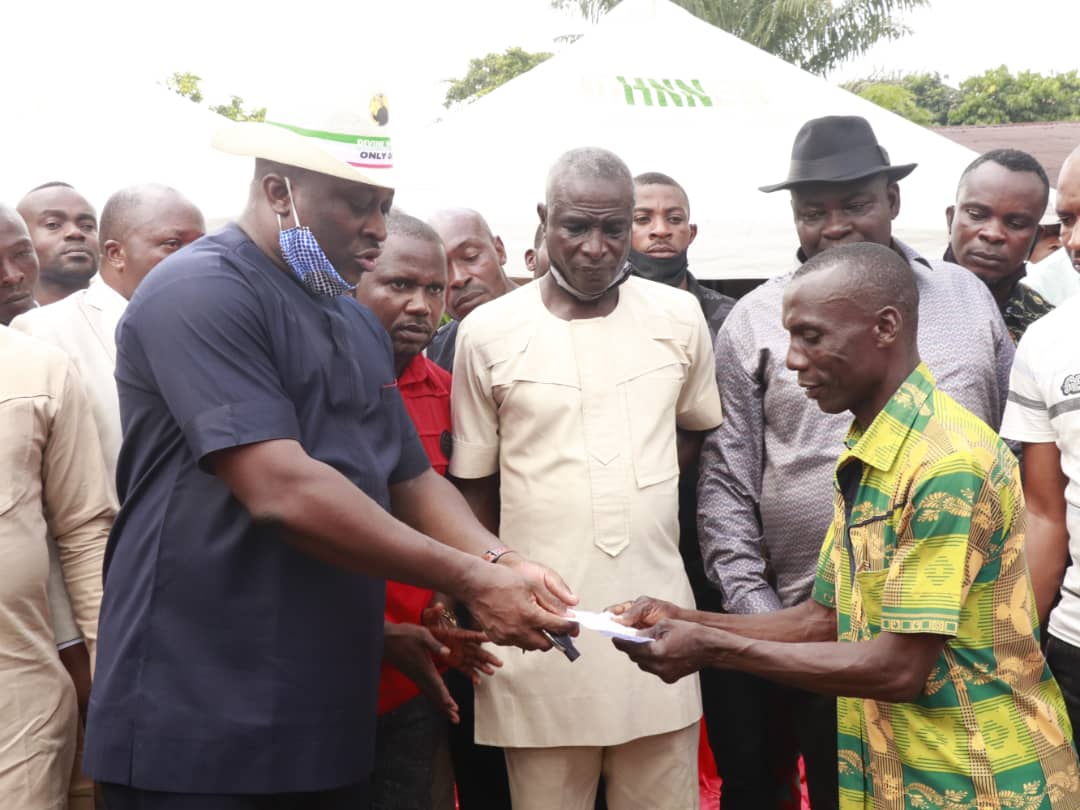 ……..others get a car, motorcycle

The fourth round of the N100m business empowerment initiative of the member representing Ikono/Ini in the House of Representatives, Hon.(Obong) Emmanuel Ukpong-udo, held today in Wards 3, 9 and 10 of Ini and Wards 1, 2 & 4 of Ikono Local Government Area as a total of 20 Million Naira was disbursed to 35 beneficiaries across the 6 wards.

Under the Macaire Enterprise Development Scheme, 19 constituents from Ikono and 16 from Ini received cash ranging between Five Hundred Thousand Naira (N500,000) and One Million Naira (N1,000,000) to develop their businesses, while two others smiled home with a car and a motorcycle.

Apostle Silas Ukata in his welcome address at Itu Mbonuso Ward 3, thanked the member for being a promise keeper and for bringing good tidings to the people, describing his gesture and magnanimity as a pleasant surprise to some people. The member, he said, had set a positive precedence for assessment of future representatives.

In his address to the people, the member representing Ikono/Ini Federal Constituency, Hon.(Obong) Emmanuel Ukpong-udo stated that his business empowerment initiative would be in 3 phases while reiterating that he had earmarked a non-refundable 100 million grant for distribution in 2020. He expressed his commitment to seeing it through even earlier than planned due to the exigencies of the pandemic period. The people-centered gesture, he stated, was under 6 active months of representation as the other 6 months were overtaken by recess in the house and lockdown restrictions.

Speaking further, Rep Ukpong-udo thanked elders of the various wards for cooperating with him but frowned at the attitude of some who insisted on being empowered at the expense of others describing such as the height of selfishness as representation was for all. He advised leaders to cultivate the culture of regularly empowering the people as that was the true essence of representation, rather than wait for election time.

He briefed his constituents on some of his life touching empowerment initiatives, the latest of which being the “U-Martha” Ambassadors Scheme targeted at providing an alternative source of income to 200 of his constituents monthly, summing up to 48 Million Naira annually.

At Ward 4 in Ikono LGA, the member launched the third part of his empowerment which he disclosed was aimed at welcoming and maintaining the new ward executive of the ward as a show of support and solidarity to them.

Across the wards visited, various speakers in their goodwill messages lauded the member for following in the good footsteps of his father and urged him to remain resolute in his pursuit of the common good of the constituency and not be deterred or distracted by naysayers.

His gesture they maintained was unprecedented in the constituency while urging the beneficiaries to maximally utilise the resources at their disposal. They sued for patience from those yet to benefit as more persons stood a chance of feeling the lawmaker’s touch in the course of his tenure.

The highly elated beneficiaries expressed their gratitude to the member for turning around their fortunes and reassured him of their continuous support and solidarity.

At Ukwok Ward 9 and 10, the member gifted a car and motorcycle to two of his constituents in fulfillment of an earlier promise he made to them. So far, 14 wards out of the 21 wards of the constituency have been visited with 7 wards to go.