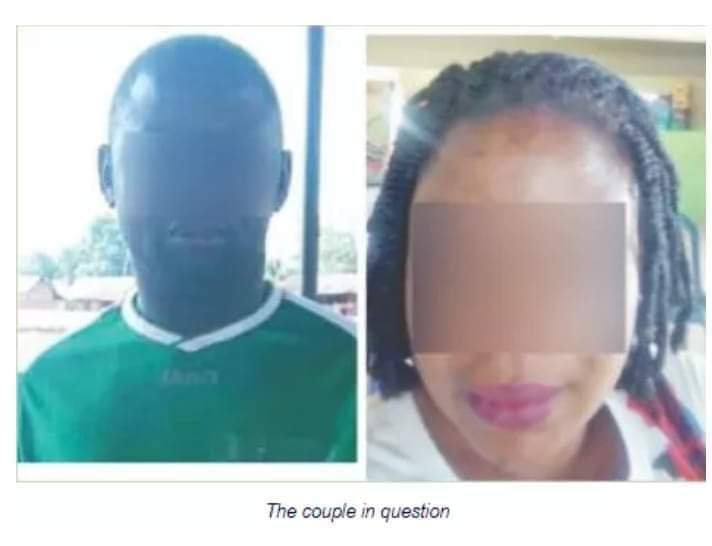 No young man or old man would pray to be in the shoes of Elias Audu. The accursed fate that has befallen him is terrible and a huge blow to his ego. Last year, one month before he reported at the NYSC camp in Osun State, Audu had married his young wife.

The graduate of Nasarawa State University Keffi, an indigene of Keana Local Government Area of the state, then patriotically proceeded to Osun State where he is presently serving his fatherland.

In the meantime, the wife he wedded 10 months ago, Tessy, continues to live in their apartment in Lafia. The native of Akwanga Local Government Area of Nasarawa State, a Second Year diploma student at Nasarawa State Polytechnic, had embarked on and completed a three-month industrial attachment.

Daily Sun reports that the couple agreed to put on hold pregnancy till he completes his national service and return to Nasarawa to find a good job. Then they can turn their attention to the critical matter of giving his aged and anxious mother a grandchild.

Now, three months to the end of his national service, Audu’s world came crashing down. He returned home last week to find his wife pregnant. Guess who impregnated his wife: His best friend.

The crisis before marriage
Audu, still dazed by shock, recounts the sequence of events leading to the scandal in an exclusive chat with our correspondent. His narration: “I got married 10 months ago to my wife after we resolved our differences due to my discovery that she was going out with someone else. Initially, I did not intend to go into a serious relationship after that discovery I mean, I was so much in love with her only for her to have jilted me. I vowed never to have any serious relationship with any woman until after my service year. But we got over the episode.

She convinced me and proved to be a different woman. She loved me genuinely, and despite my resolve, I found myself falling in love with her again. It began gradually and with time, I could not do without her. She made me forget the past. In no time, all I could think of was to be with her for the rest of my life.”

The pressure to marry
“The pressure to get married from my old mum was overwhelming. My father had put pressure on me to get married and bear him grandchildren before his death. Unfortunately, he died six years ago without seeing my children. Being the only son in the family, my mother understandably also put me under pressure, that her time is almost up in this world and she would want to see me bear children before her final exit. That was the pressure that pushed me into getting married before my NYSC. When I took her to meet my mother, she fell in love with her on the spot and told me she was the very woman who would give her grandchildren. We got married soon after and look forward to a happy family with our kids. But we both agree that she will not “take in” until after my service year, little did I know that the devil would use my best friend to destroy my home.”

The man who got her pregnant
“I grow up together with Mike Agu in Keana. We are childhood friends. We attended the same primary school and also the same secondary school, Government Science School Lafia. He was fortunate to have gotten admission into the university before me. Nonetheless, we were very close friends. When I joined him at the university the following year, we were like brothers. Our relationship grew beyond ordinary friendship.

“When my name came out for the 2018 Batch B NYSC, I proceeded to Osun State immediately. My wife could not visit me in Osun because three of us who are corpers lived in one room. There was no need for her to come around since accommodation will be a problem her coming around means I have to rent my own apartment which is beyond my means. Since I did not have the means, I decided she should not visit. I was not happy to leave my new wife all alone for one year, but she was equally in school and we needed to understand ourselves; more so, with my close friends and relations in Lafia, I felt she was in safe hands.“While in Osun, I kept in touch with her as much as I could. My friends I spoke and chatted with also told me she was doing great.

I had told Mike Agu, who was the closest to me, to always check my rented apartment in Lafia to see that my wife was doing well. Mike had finished his service year and was teaching in a private school in Lafia. How could I have known that I was putting my wife in harm’s way?”

The shocking discovery
“Throughout this year, I have not visited home due to the tight schedule of my duties at my place of primary assignment. My last visit was in November 2018. I had got some break and decided to visit home again. I arrived home with so much joy. The first warning sign was when I got to the park and my wife was not around to welcome me as usual.

“It was her next-door neighbour that came to welcome me at the park. Even Mike, my friend, whom I have been communicating with since I left Osun State, was nowhere at the park. When I asked why my wife was not at the park, her neighbour told me she was not feeling too well and they advised her to stay at home. I did not buy that explanation but I kept quiet and could not wait to get home. When I got home, I met the shock of my life. There stood my wife with a protruding stomach. I was transfixed, trying to recall if there was any time she told me she was pregnant, but I could not remember any. Her neighbour was in an unusual hurry to leave. After her departure, I asked my wife what was going on. She broke down and confessed that Mike seduced her, they had sex and the pregnancy resulted. As for Mike, I have not called him since I came back home. I leave him to his conscience.”

My dilemma
“When I visited my mother in the village, she was so happy that her son’s new wife is pregnant. The news has reached her! My mother believes that I am responsible for the pregnancy. She is not aware of the arrangement we had to wait until after my NYSC programme. I am still in shock and confused about what to do at the moment. But one thing I know is that she can’t be my wife again and forever. I want her to take the decision herself instead of waiting for me to push her out. I am not even going to tell my mother. From here, I am going back to Osun State and I will not come back to Nasarawa State until after my passing out. I intend to settle down in Abuja or Lagos to look for something doing. Between me and her, it is over. I will move on with my life.”

Tessy’s story
When Daily Sun contacted Tessy after her lectures at the Polytechnic, she burst into tears wailing that what ought to be a family secret (and hopefully settled internally) has been exposed to the media by her husband. “I had never cheated on my husband since I got married to him, I never even contemplated it, but the temptation of s*x pushed me into it. I consider it the devil’s work. I am a victim,”she cries.

Tessy makes a clean breast of it: “The truth is that before I got married to him, I had four abortions from unwanted pregnancies, and I almost lost my life in the last abortion. The doctor warned me not to do abortion again, that it might damage my womb. I can’t explain actually how Mike, his closest friend, find his way into me. He actually lured me to his house after an outing. And truly, he was good in bed, which attracted me to make it regularly.

“Mike was so good in bed he soon wiped the memories of my husband’s touch from my mind. I lost control of myself. We had sex every day after he closed from work. I always joined him after I closed from my place of work where I was doing my IT. We had s*x daily, including weekends for two months; I soon forgot that I was actually a married woman. As the second month, I began to notice changes in my body. I later found out from a test that I was more than a month pregnant. I told my neighbour that I had been doing it with Mike all these while. She asked me the way forward, and the answer till date is difficult because I didn’t want to lose either my life or womb due to another round of abortion; this child might be my last opportunity.

“For several weeks, I slept and thought over it; I was in turmoil, I never knew what to do, because how will my husband react to this when he got to know after we both agreed to hold ourselves until he completes his service? On the other hand, I prayed to God that when he eventually knows, he should allow me to keep the pregnancy because it might be my last opportunity to have a child. At the moment I am not prepared to abort it. So, I am waiting patiently for his decision.

So what about Mike Agu, who impregnated a married woman?
“He has left Lafia to an unknown place since he discovered that my husband is back,” Tessy says. “And since the sad development, his two lines have not been going through. I can’t reach him.” Currently, she is distressed, at a crossroads. Says she: “ I don’t know what to do, I am waiting for his (Audu’s) final decision on me. But I have told my parents to seek a loan to pay my husband back his pride price. I know I have disappointed him, but I am pleading with him to forgive me.”

Mike Agu, the villain
An effort was made to reach Mike Agu, the man who got his friend’s wife pregnant, for his own side of the story. Eventually, Daily Sun got to him through the Vice Principal of the school where he is a teacher. Without mincing words, Agu blames Tessy for the misadventure.

Here is his response:
“The girl demanded s*x from me after I took her out; she actually begged for it and temptation overtook me. When she made it a regular thing without contraceptive, I raised the issue of pregnancy but she said she knows when to get pregnant and that she doesn’t enjoy s*x with a condom.”

He is nonetheless ashamed of his conduct. “I feel so ashamed and disappointed with myself,” he laments. “This matter will linger long in our village and it will affect the cordial relationship between myself and Elias, including our parents. It is too bad that the devil has used me. I don’t know how to apologize to him. I have betrayed his trust and confidence in me. May God forgive me of my sins.”

*What would be your advise in this matter?