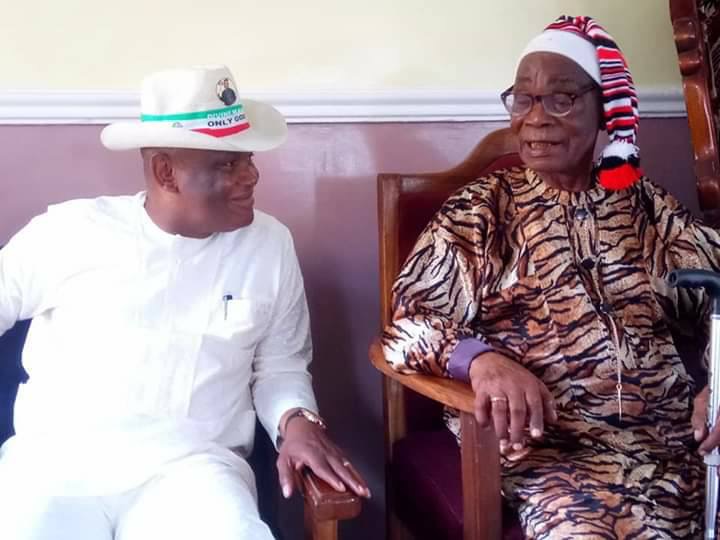 Edidem Ntoeng Akpan, who is the Chairman, Akwa Ibom State Council of Chiefs, gave the commendation, Thursday, at his palace in Itu Mbon Uso, when he played host to the Commissioner for Works, Mr Ephraim Inyang-Eyen, who made a brief stop over after inspecting ongoing road construction in the area.

The Royal father who also appealed that the road leading to his palace; Itu Mbon Uso Road as well well as Ananamong – Obot Ndom Road, which however, connect other communities in the area, be rehabilitated, expressed the readiness of residents of Ini to always support the Emmanuel administration.

Responding, the Commissioner for Works, Mr Ephraim Inyang-Eyen, eulogised the monarch and the people of Ini for the unflinching support to the current administration, stated that Governor Emmanuel since assumption of office, is touching areas that were hitherto underdeveloped.

Inyang-Eyen who enumerated projects executed by the governor in the area, including, the ongoing construction of the 14.7Km Ikpe Ikot Nkon – Obotmme – Arochukwu Road, the Rice mill and other projects, said that the infrastructural development strides of the present administration have created jobs and alleviate poverty in the area in particular and Akwa Ibom by extension.

Assuring that the roads will be rehabilitated to ease transportation challenges faced by the people, Inyang-Eyen, hinted that, the governor knows how to pull resources for the benefit of a great majority of Akwa Ibom people.

Meanwhile, a sizeable number of Ini indigenes including youths and women, were seen chanting various solidarity songs outside the palace, in appreciation of the Governor’s projects in the area.